EHL and EHLP Teams Looking to Make a Run

BURLINGTON, VT -- After a long regular season, both Lumberjacks teams have clinched a spot in the playoffs as the EHL squad will enter as a #3 seed and will host the #6 seed Connecticut Roughriders in the First Round.

The EHLP squad on the other hand, earned the #4 seed and they will face-off against the #5 seed Walpole Express in Play-In Game for the New England Conference.

The EHL team is heading into the playoffs having won 15 out of their last 17 games down the stretch. After the hot end to the season, the Lumberjacks finished in 2nd place in their division with a record of 28-14-3. The team scored 211 total goals this year, and averaged 4.64 goals per game which ranked #4 in the entire league. On the other end, the squad only allowed 139 goals over the course of the season. The Lumberjacks ranked #4 in the league in power-play percentage at 21.9% and were #6 in the league on the penalty kill at 84.6%. Glynn Robitaille was the Lumberjacks' leading scorer in the regular season, with 28 goals and 28 assists (56 points). Robitaille also led the Lumberjacks in power-play goals with nine and game-winning goals with six. Both Logan Discanio and Mason Emoff were not far behind in points as Discanio collected 16 goals and 39 assists (55 points) on the season, and Emoff had 22 goals and 32 assists (54 points). Last year’s EHLP Forward of the Year finalist, Geordan Buffoline, transitioned smoothly to the top level as the forward was tied for 4th on the team in scoring, with 17 goals and 24 assists (41 points). Andrew Bechard also had himself a solid season with 41 points of his own. Cory Doney led all defensemen in scoring with 36 points in just 38 games with the squad. Another late addition, Dan Barry, fit right in the Lumberjacks' defensive core, posting 24 points in 29 games with the team. Connor Carbo led the Lumberjacks in wins with 13 victories between the pipes, to go along with a GAA of 2.56 and a pair of shutouts. Kyle Konin was also solid in net since joining the Lumberjacks halfway through the season, as the Rhode Island native posted a 9-1-0 record, to go along with a 2.04 GAA and one shutout.

The Lumberjacks now will face-off against the #6-seed Connecticut Roughriders in the First Round of the EHL Playoffs. The squad won both of their games against the Roughriders this year, winning the most recent matchup by a score of 6-3 a couple weekends ago. The Roughriders ended their regular season having lost four straight games, and will have to play the entire three-game series in Burlington. The best-of-three series is set to start this Friday at Leddy Arena at 8:30pm. Game 2 is scheduled for Saturday morning at 9:00am and Game 3, if necessary, will be played on Monday at 1:20pm.

The EHLP squad finished off their regular season on the right note, with a win against the New England Wolves this past Saturday, and will enter the EHLP playoffs as the #4 seed with a record of 19-20-5. As a team, the Lumberjacks scored a total of 150 goals this year, and let up 165 goals with a pair of shutouts. Jacob Dillon led the team in scoring with 18 goals and 21 assists (39 points), and maintained a point per game average of 1.03 over the season. Frank Mondi wasn't far behind in points with 13 goals and 22 assists (35 points) on the year. Connor Cameron had the highest points per game average on the team at 1.10 with 34 points in just 31 games. Aaron Damren led all defensemen in scoring with 13 points. Dillon Whalen led the Lumberjacks with nine wins between the pipes, along with maintaining a GAA of 2.91 and collected a pair of shutouts. Both Connor Schultz and Alex Herman also contributed in net as well, as they each collected five wins apiece this season.

The Premier team will host the Walpole Express later this afternoon in a single elimination First Round matchup. Going into this afternoon’s contest, the Express have lost three out of their last four games. The Lumberjacks held a 5-1-0 record against Walpole in the regular season, but lost the most recent matchup back in January. Today’s First Round matchup is set to start at 1:30pm at Leddy Arena. 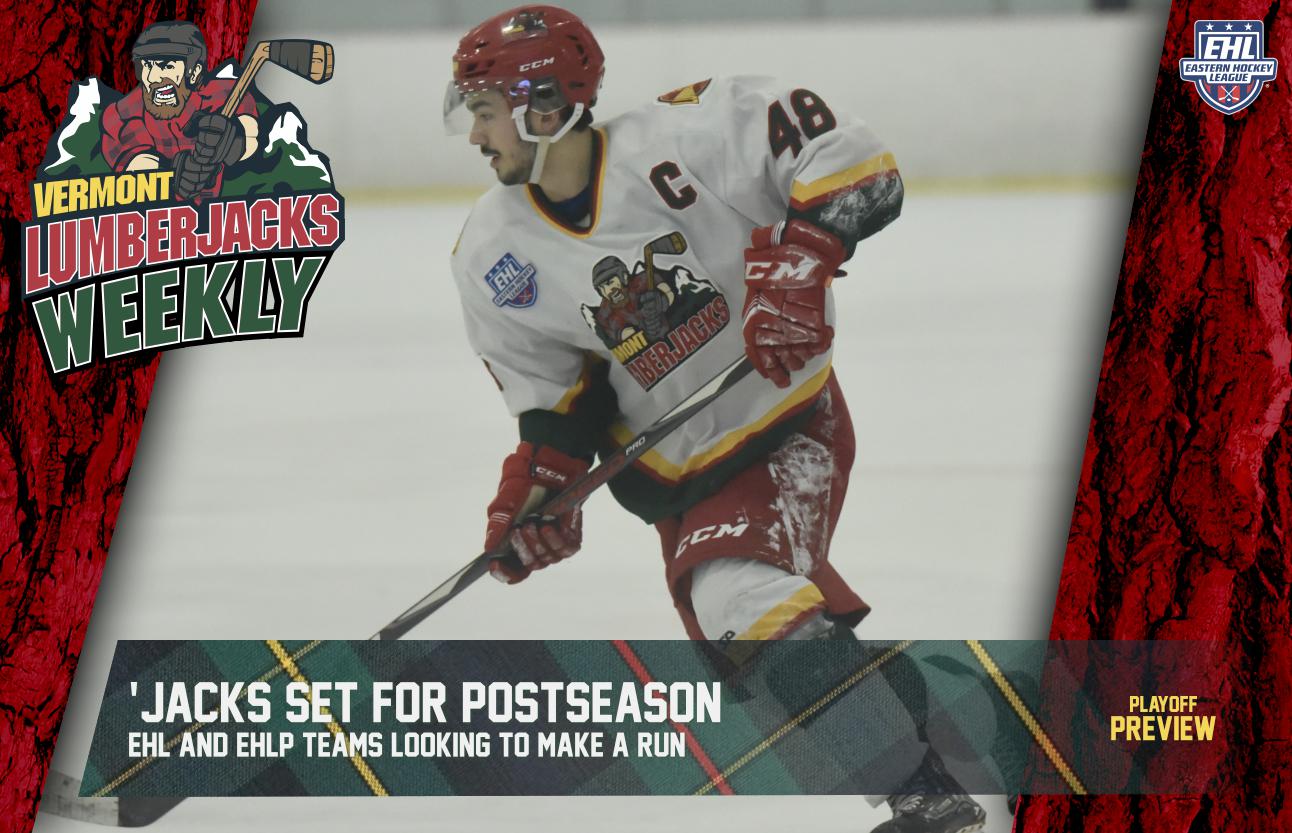