EHL and EHLP Teams Ready to go After Week Off

BURLINGTON, VT -- Both Lumberjacks squads are set to return to the ice this upcoming weekend, for a pair of games each, against the New Hampshire Avalanche.

Looking back on the weekend of October 19th and 20th, each team was in action with a pair of matchups on the road against the Connecticut Chiefs.

The EHL team took care of business in their two games, winning by a combined score of 13-4 and extending their winning streak out to four games. With the victories, the EHL team sits in a tie with the Avalanche for 1st place in the New England Conference, with a record of 10-2-1.

The EHLP team on the other hand, came away with three points over the mid-October weekend, and currently sits in 3rd place in their conference with an overall record of 7-3-4.

On Saturday the 19th, the EHL team faced-off against the Chiefs for the first of four matchups against their conference opponent this season. Austin Marini converted on the power-play in the closing minutes of the 1st period to give the Lumberjacks a 1-0 lead. Geordan Buffoline added a pair of quick goals early on in the second frame, including a power-play tally to give the Lumberjacks a three-goal advantage. The Chiefs responded with a goal around the midway point of the period, but the Lumberjacks converted on by the power-play for the 3rd time in the game just a couple minutes later, as Logan Discanio gave Vermont a 4-1 lead.

The Chiefs fought back with a goal near the end of the frame, followed by another goal early in the 3rd to cut the lead down to 4-3. However, the power play units continued to produce for the Lumberjacks, finishing 5 for 8 (62.5%) as Marini and Evan Beers both added power-play goals later on in the frame, to lead the boys to a 6-3 win. Both Discanio and Beers each collected a trio of assists in the contest. Dillion Whalen stood tall between the pipes, stopping 32 shots for his 3rd victory of the season.

The EHL squad returned to action the very next day for another matchup against the Chiefs, and didn't waste any time getting started, as Buffoline and Discanio each scored in the first three minutes of the game to give the Lumberjacks a quick 2-0 advantage. After a scoreless rest of the 1st period, Connor Cameron beat the Chiefs goaltender around the 16-minute mark of the 2nd frame, to put the Lumberjacks ahead by three. Just a few minutes later, both MacCallum Brown and Ben Rouillard added to the score to give the boys a commanding 5-0 advantage.

Discanio and Marini each found the back of the net for a 3rd time in the final period, and the Lumberjacks cruised to a 7-1 win. David Reduzzi stopped 28 shots in route to his 5th win of the year.

On Saturday the 19th, the EHLP team squared-off against the Chiefs for the second of six matchups this season. The Lumberjacks came away with a 6-3 win in the last game between the two teams, at the EHLP league-wide showcase two weeks ago. The Chiefs drew first blood in the opening frame and held onto their lead until early in the 3rd period, when Colby Anton converted on the power-play to knot the game up at one goal apiece. After a scoreless rest of the period, the game headed into overtime, where unfortunately, the Chiefs came away with the extra point. Sam Fath was busy in net, stopping 31 shots in the overtime loss.

On Sunday the 20th, the Chiefs grabbed the early lead again in the 1st period, but Tyler Penree found the back of the net for a 6th time this season in the second frame to square things up. The game remained scoreless until overtime, when this time the Lumberjacks came out on top as Riley McBride scored on the power-play to give the boys the 2-1 victory. Cam Isabelle stopped 23 shots for his 3rd win of the season.

The All-Stars have returned to Burlington, as DiScanio, Doney, and Marini will look to use their new experience to their advantage, starting this upcoming weekend.

On Saturday the two-game sets will begin with the Avalanche, with the EHLP teams kicking things off at 4:00pm, followed by the EHL teams at 7:00pm.

Fast-forward to Sunday, and the EHLP teams will again lead the way at 9:00am, followed by the EHL teams at Noon. 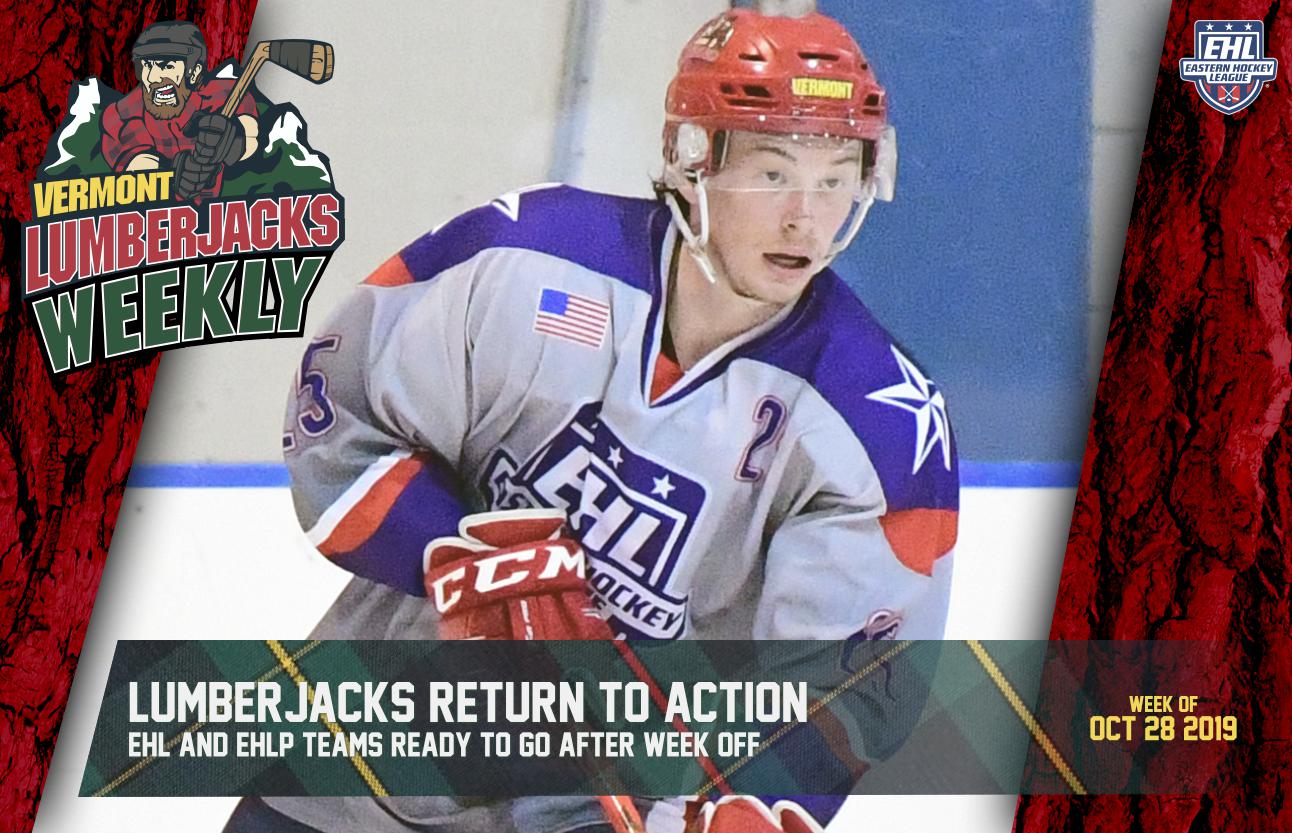