EHL Team Moves to #1 in the Power Rankings

BURLINGTON, VT -- Both Lumberjacks squads were back in action this past week after the All-Star break. The EHL team won both of their matchups over the weekend and currently sit in 2nd place in the New England Conference with a record of 12-2-1.

On the other end, the EHLP squad split their two games this past weekend and now sit in 5th place in their conference with a record of 8-4-4.

On Saturday the 2nd, the EHL squad kicked-off their two game series at home against the New Hampshire Avalanche. Coming into the weekend, both teams held a tie for the first spot in the New England Conference. The Lumberjacks split the last two-game set on the road against the Avalanche back in October, and won’t play them again in the regular season after this past weekend. After a scoreless 1st period, the Avalanche got on the board first with a short-handed goal late in the 2nd frame. After the Avalanche took a 2-0 lead, the league’s leading scorer and October’s Forward of the Month, Logan Discanio, notched a pair of power-play goals just 27 seconds apart to knot the game up at 2-2. The Avalanche took back the lead a few minutes later, but Geordan Buffoline scored in the winding minutes on the game, on the man advantage, to send the game into overtime. After the Avalanche took a penalty in the final seconds of regulation, Buffoline scored his 2nd power-play goal and team's 4th of the game, after a nice cross ice fed from Discanio just 33 seconds into overtime to give the boys the 4-3 win. The EHL Goalie of the Week, David Reduzzi, was solid between the pipes, stopping 28 shots in the overtime victory.

On Sunday the 3rd, the Lumberjacks wrapped up their regular season series against the Avalanche. After a scoreless 1st period, Jensen Dodge, collected a pair of goals in the 2nd frame to give the boys a 2-0 advantage. The Avalanche cut the deficit in half early in the 3rd period, but Reduzzi shut the door for the remainder of the game, stopping 21 total shots in route to his 7th win of the season.

The Lumberjacks would also like to take the time to congratulate Evan Beers for winning the October Defenseman of the Month honors, as Vermont become the fist team to claim two honors in the month.

The EHLP squad also finished off their season series against the Avalanche this past weekend. In the previous three games against their conference rival, the Lumberjacks held a 1-0-2 record, with a pair of shootout losses. The Lumberjacks fell behind early on Saturday, but the team’s leading scorer, Brandon Clark, evened things up at one goal apiece near the halfway mark of the 2nd period. The Avalanche took the lead back with 11:27 left in the 3rd, but Riley McBride evened things up again just a couple minutes later with his 9th goal of the season. However, the Avalanche scored a trio of unanswered goals in the final minutes of the contest and won by a final score of 5-2. Cam Isabelle was busy in net, stopping 32 shots in the loss.

The Premier team returned to action the very next day against the same opponent and got off to a hot start as both Clark and Maverick King scored 1st period goals, to give the Lumberjacks an early 2-0 advantage. The Avalanche responded with a goal of their own in the opening minutes of the 2nd frame, but Patrick Williams got the two-goal advantage back with a power-play tally just passed the 13-minute mark of the period. Despite a 3rd period goal from the Avalanche, the Lumberjacks held on for the 3-2 win. Sam Fath was terrific in net, stopping 34 shots for his 3rd victory of the season.

Both Lumberjacks squads will get back to work this upcoming week with busy slate of games. The EHL team will face-off against the Railers Jr. Hockey Club at home on Friday at 3:10pm, before the 3rd league-wide showcase of the season, which is set to kick-off on Sunday in Haverhill. The Lumberjacks will matchup against the East Coast Wizards at 4:15pm on Sunday, followed by a game against the Philadelphia Jr. Flyers on Monday at 1:00pm.

On the other end, the EHLP will also take part in their own league=wide showcase, which is set to start on Sunday at the Chelmsford Forum. The Premier team will face-off against the Valley Jr. Warriors at 3:40pm on Sunday and then will play two games on Monday starting with a game against the Philadelphia Little Flyers at 10:15am followed by a matchup with the New York Bridgemen at 1:30pm.

For the complete showcase schedule in the EHL and the EHLP, be sure to visit the league website, www.easternhockeyleague.org. 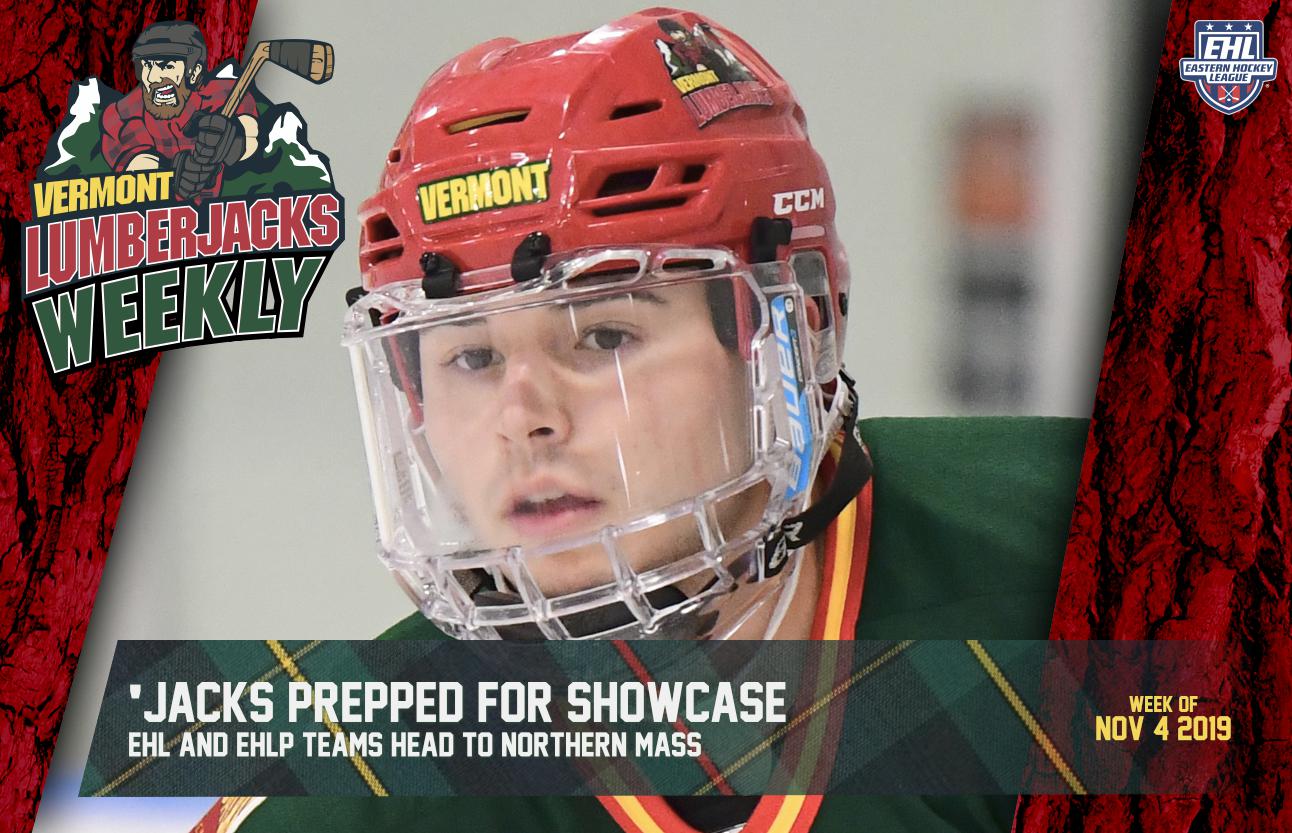