BURLINGTON, VT -- Both Lumberjacks squads were back in action this past week, as the EHL team took care of business on Friday, before winning both games at the showcase for a perfect 3-0-0 weekend. With the trio of victories, the EHL team took over sole possession of 1st place in the New England Conference, with an overall record of 15-2-1. The Lumberjacks are also currently riding a nine-game winning streak.

On the other end, the EHLP team posted a 1-2-0 mark over the last week, and currently sit in 5th place in their conference with an overall record of 9-6-4.

On Friday afternoon, the EHL squad hosted Worcester, for the second matchup of the season with the Railers Jr. Hockey Club. The Lumberjacks won the first matchup between the two teams, all the way back on the first game of the year, by the final score of 7-1.

Cam Roberts put the Lumberjacks on the board first with a goal just over 15 minutes into the 1st period. Just a couple minutes later, the EHL’s leading scorer, Logan DiScanio, converted on a penalty shot to give the boys a 2-0 lead. DiScanio then added another goal in the 2nd frame, followed by a Geordan Buffoline tally (who is currently 2nd in the EHL in scoring), to make it a 4-0 game. The Railers responded with a pair of quick goals in the early minutes of the 3rd, but DiScanio completed the hat-trick on the power-play, to extend the lead out to 5-2. Cory Doney added another power-play goal later on in the frame for a little insurance, and the Lumberjacks won by a final score of 6-2. Connor Carbo stopped 24 shots between the pipes in the win.

On Sunday afternoon and day #1 of the showcase, the Lumberjacks faced-off against the East Coast Wizards for the second time this season. Vermont won the first matchup between the two teams back in September and will play their conference opponent two more times in the regular season.

Jensen Dodge gave the squad the early lead just 2:59 into the contest. However, the Wizards responded with a goal of their own just a few minutes later. Egan Schmitt then gave the Lumberjacks back the lead with a goal just passed the halfway point of the frame. The Wizards tied the game up again halfway through the 2nd half and forced overtime, but DiScanio ultimately gave the boys the 3-2 win just 43 seconds into the extra frame. Carbo stopped 20 shots in net, in route to his 4th win of the season.

On day #2 of the showcase, the Lumberjacks faced-off against the Philadelphia Jr. Flyers for the first and only time in the regular season. Zachary Booth put the Lumberjacks ahead first, near the halfway point of the first half, and Dodge quickly followed with another goal just over a minute later to make it a 2-0 score. The Jr. Flyers cut the lead down to 2-1 near the end of the half, but Schmitt got the two-goal advantage back with a tally in the first couple minutes of the 2nd half. The Lumberjacks scored four more times in the frame and won by a final score of 7-2. Buffoline, DiScanio, Doney, and Dan Barry had the 2nd half goals. Dillon Whalen stopped 17 shots for his 4th win of the year.

On Sunday afternoon and day #1 of the showcase, the EHLP squad squared-off against the Valley Jr. Warriors for the 3rd time this season. The Lumberjacks won the previous two matchups, and will play their conference opponent two more times at the end of the regular season.

The Warriors scored the first two goals of the game this time around, but the Lumberjacks leading scorer, Brandon Clark, cut the deficit in half near the end of the 1st. After another Warriors goal early in the 2nd half, Colby Anton converted on the power-play to make it a 3-2 game. However, the Warriors scored just a couple minutes later to take back the two-goal advantage. Despite a late goal from Robbie Baker, the Lumberjacks fell by a final score of 4-3. Alex Herman stopped 17 shots in the losing effort.

On day #2 of the showcase, the Lumberjacks faced-off against the 1st-place Philadelphia Little Flyers in the afternoon for the first and only matchup between the two teams this season. The Little Flyers scored the games first three goals on Monday, but Clark cut the deficit down to 3-1 with a goal near the 15-minute mark of the first half. The Little Flyers added 2 more goals from there, and despite a late tally from Riley McBride, the Lumberjacks fell by a final score of 5-2. Sam Fath was busy between the pipes, stopping 38 shots in the loss.

The boys hit the ice again on Monday for the 2nd game of the day, squaring-off against the New York Bridgemen. The Lumberjacks wasted no time as Colby Anton scored just 18 seconds into the contest, and they didn't look back from there, scoring three more times in the opening frame. Barker added two of the goals and Grant Rosenberger had the other.

Anton then scored two more times in the 2nd half to compete the hat-trick with his 9th and 10th tallies of the year. Luke Dion scored another late and the Lumberjacks cruised to a 7-1 victory. Herman made 15 saves for his 3rd win of the season.

One busy week leads into another for the Lumberjacks' organization as the EHL squad will head on the road for a pair of matchups against the New England Wolves this upcoming weekend. Saturday’s game will be played at 7:00pm, followed by a matchup on Sunday afternoon at 2:15pm.

On the other end, the EHLP team will play a three-game series against the Wolves in Laconia, starting on Friday night at 7:15pm. Saturday’s game is scheduled for a 4:00pm puck drop, and the series will wrap-up on Sunday morning at 9:35am. 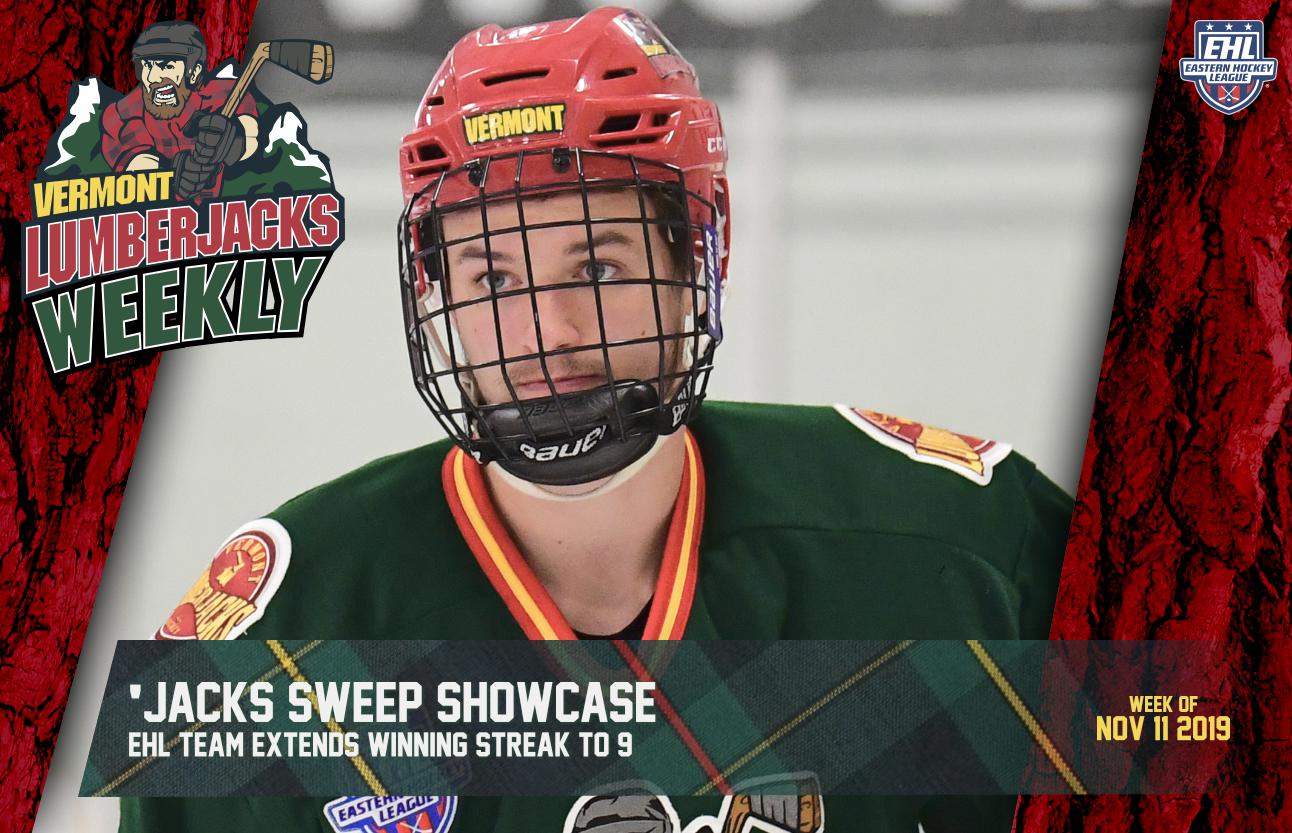