EHL and EHLP Team Look to Bounce Back After Tough Week

On Saturday night, the EHL squad played the first of two games over the weekend against the New England Wolves down in Laconia. Saturday’s matchup marked the first of four meetings between the two teams this season. Austin Marini got the Lumberjacks on the board first, just under five minutes into the contest. Geordan Buffoline made it a 2-0 game a few minutes later and then, recent UMass Boston commit, Logan DiScanio, gave the boys a 3-0 advantage on the power-play near the halfway point of the frame.

The Wolves battled back and scored a pair of goals late in the period, but then Buffoline put Vermont back ahead by two goals in the 2nd frame with another power-play tally. However, the Wolves scored five unanswered goals from there, including two empty net tallies in the 3rd, as the Lumberjacks fell by a final score of 7-4. David Reduzzi stopped 19 shots in the loss.

The Lumberjacks top three scorers connected on an early power play goal on Sunday, as Buffoline gave the boys the early lead with help from both DiScanio and Marini on the assists. After a scoreless rest of the period, the Wolves tied the game up at 1-1 on the man advantage, but just 28 seconds later, Jordan Michaud scored his first goal of the season (short-handed), to give the Vermont back the lead. However, the Wolves scored four times in the 3rd and despite a power-play goal from Marini in the frame, the Lumberjacks fell by a final score of 5-3. Connor Carbo made 20 saves in the losing effort.

On Friday night, the EHLP squad kicked off their three-game series against the Wolves. The Lumberjacks are scheduled to face-off against their conference rival two more times after this past weekend as well. The Wolves got off to a quick start on Friday, scoring three unanswered goals in the 1st frame. Grant Rosenberger got one of those goals back in the 2nd period, but the Wolves responded in a hurry to make it a 4-1 game. Despite a late goal from Tyler Penree, the Lumberjacks dropped the first game of the series by a final score of 5-2.

On Saturday, the middle game of the series, Riley McBride gave the boys and early lead just under eight minutes into the contest. After a scoreless rest of the period, the Lumberjacks leading scorer, Brandon Clark, scored his 10th goal of the year and gave Vermont a two-goal advantage. Unfortunately though, the Wolves battled back for three unanswered goals, including a goal with 1:07 left on the clock in the 3rd, and won by a final score of 3-2. Cam Isabelle was busy between the pipes, stopping 26 shots in the loss.

On Sunday morning, the Lumberjacks faced-off against their divisional opponent for the 3rd time in 3 days. The Wolves scored goals in the 2nd period and early in the 3rd to take a 2-0 lead, but Nick Speckhart cut the lead in half with a power-play tally around the halfway point of the final frame. The one goal wasn't enough though, as the Wolves added an empty net tally in the final minutes, and won by a final sore of 3-1. Isabelle was solid in net again, stopping 33 shots in the losing effort.

Both Lumberjacks squads are back in action on the road this upcoming weekend and will look to bounce back against the Raliers Jr. Hockey Club. The EHL team will face-off against the Railers on Friday at 11:30am, and then on Saturday at 12:50pm

The EHLP squad will also square-off against the Railers for a pair of games. Friday’s matchup is scheduled for 6:40pm, followed by Saturday’s game which will be played at the same time as the EHL game. 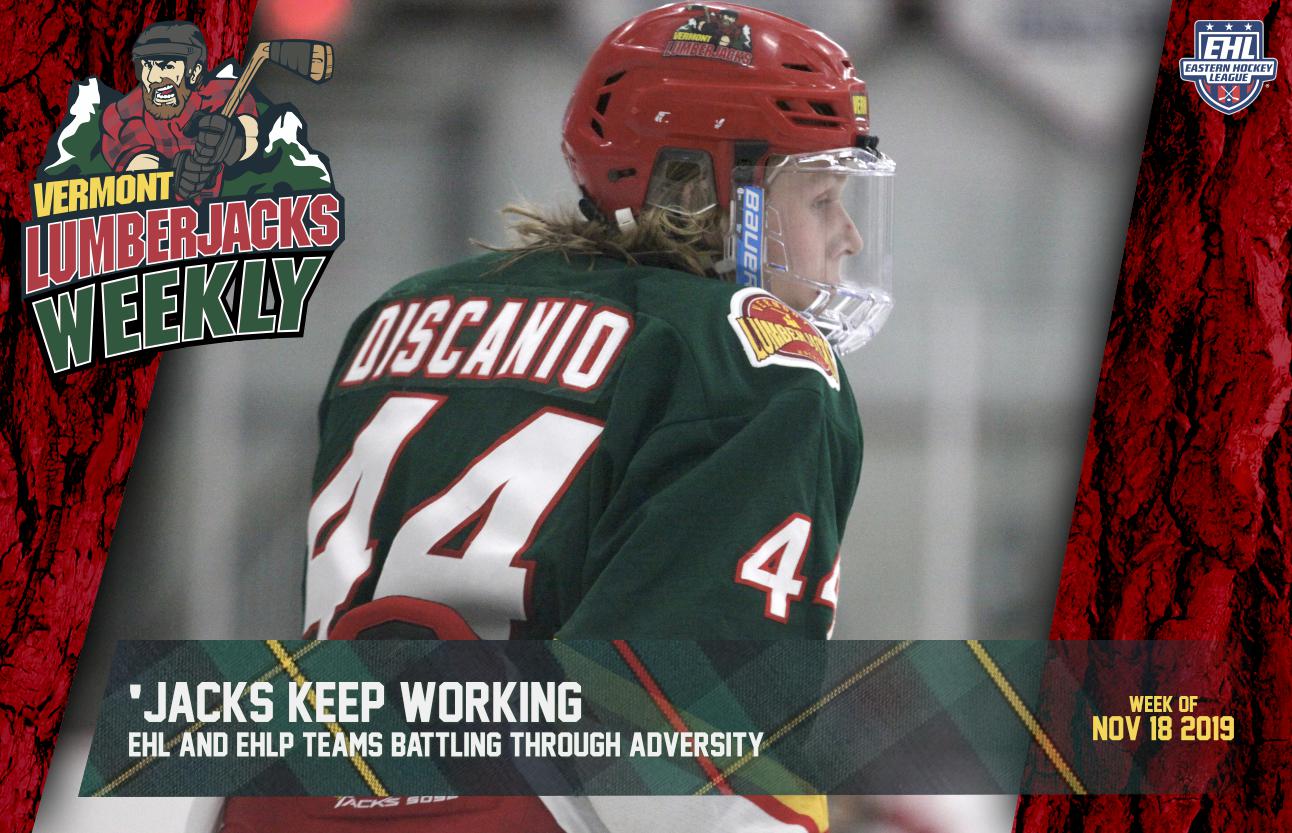