BURLINGTON, VT -- Both Lumberjacks squads were back in action this past weekend, as the EHL and EHLP teams combined for a perfect 4-0-0 record. With the victories, the EHL team moved into 2nd place in the New England Conference with an overall record of 19-4-1, and just trail the 1st-place Boston Jr. Rangers by three points.

The EHLP team on the other hand, currently sits in 5th place in their conference with an overall record of 11-11-4.

On Saturday, the Connecticut Chiefs came into town for a pair of matchups to wrap-up their season series with the Lumberjacks. Vermont beat them twice back in October by a combined score of 13-4. After a mostly scoreless 1st period, Dan Barry put the boys on the board on the power-play in the final minute of the frame. Cory Doney then gave the Lumberjacks a two-goal advantage in the 2nd frame with his 8th tally of the season. The Lumberjacks finished off the Chiefs in the final period as both Connor Cameron and Frank Mondi added insurance goals, and led Vermont to a 4-1 win. Connor Carbo was solid between the pipes, stopping 23 shots in his 5th win of the season.

On Sunday, after a scoreless first period, Egan Schmitt put the Lumberjacks ahead first with a short-handed goal near the end of the 2nd frame. Geordan Buffoline added a power-play goal just a couple minutes later to make it a 2-0 score. The Lumberjacks piled it on in the 3rd period with three unanswered goals, and won by a final score of 5-0. Barry, Logan DiScanio, and Cam Roberts collected the 3rd period tallies, and David Reduzzi turned away all 29 shots that he faced for his 1st shutout, and 8th win on the season.

On Saturday, the Premier squad also kicked off their own two-game set against the Connecticut Chiefs. Going into the weekend, the Lumberjacks held a 2-0-1 record against their division rival so far this season and is scheduled to face-off against them one more time after this past weekend. The Chiefs got the game's first goal, but Brandon Clark quickly responded on the power-play to tie the score back up. Just 23 seconds after, Patrick Williams gave the Lumberjacks a 2-1 advantage. After a scoreless 2nd period, Vermont came out flying in the 3rd with a trio of unanswered goals from Macauley Bernier, Nick Speckhart, and Luke Dion, and won the game by a final score of 5-1. Cam Isabelle stopped 17 out of 18 shots for his 4th win of the season.

On Sunday morning, the Chiefs scored the game's first goal again, but Speckhart beat the Chiefs goaltender with just one second left in the 1st period to knot the game back up at 1-1. However, the Chiefs scored a late period goal of their own with just seven seconds left in the 2nd period, and took back the lead. Around the halfway point of the 3rd, Evan Parent tied the game up with his 4th goal of the season and forced overtime.

It then only took Luke Dion 1:04 to find the back of the net in the extra frame, as the Lumberjacks won by a final score of 3-2. Alex Herman stopped 22 shots for his 4th win of the year.

Both Lumberjacks squads have a quiet upcoming week ahead as the EHL squad will head to a league-wide showcase in Newington, CT on Thursday for just one matchup against the Walpole Express at 2:45pm. The EHLP team on the other end, if off until the weekend of December 21st.

Following Wednesday's game against the Express, the EHL team will then take on the Seahawks Hockey Club and East Coast Wizards during a quick two-day road trip, December 17th and 18th. After that pair of matchups, the Lumberjacks will then host Walpole on the 21st and head into the holiday break.

As just mentioned, the EHLP team is off until the 21st, when they begin a two-game home set of their own against the Express.

Following that weekend, the final Lumberjacks Weekly of the calendar year will be released on Monday, December 23rd. 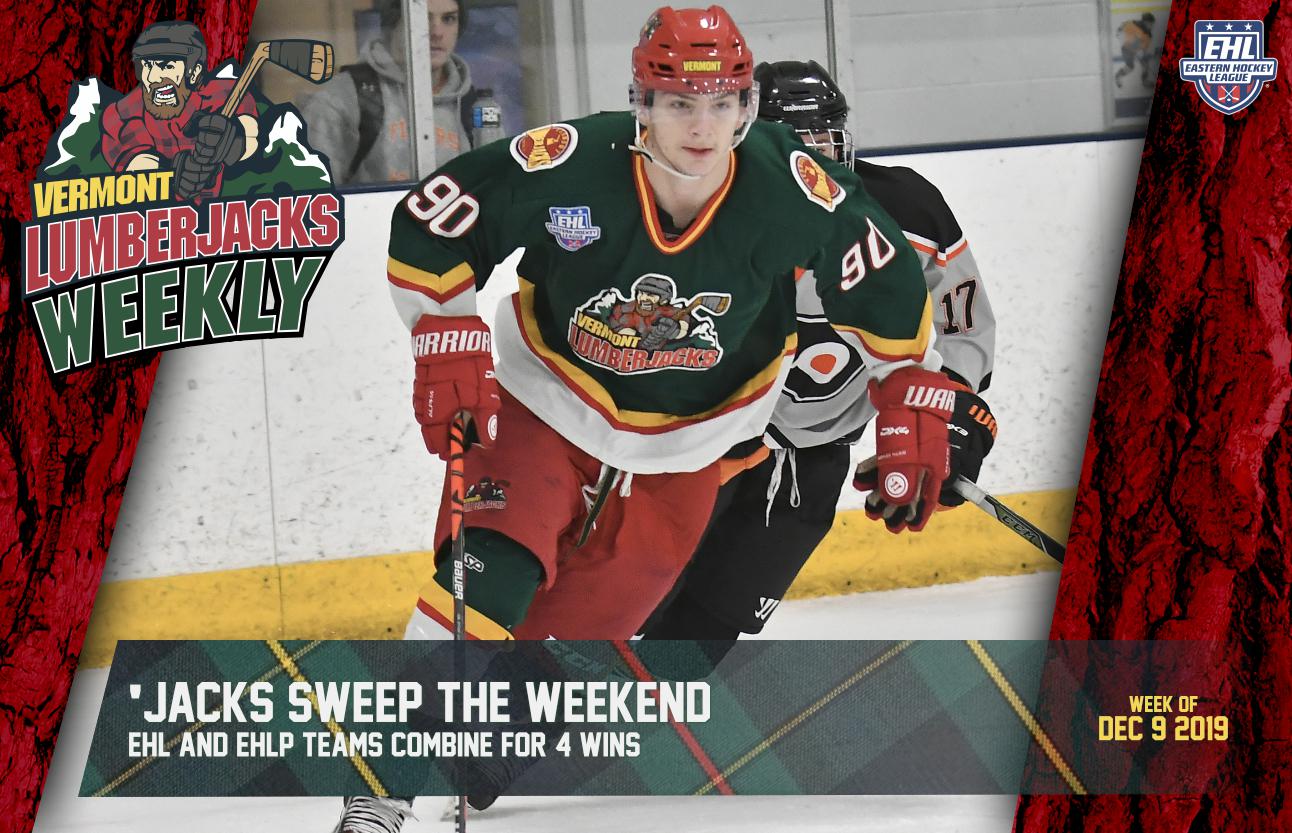