EHL Team On Pace for Best Season in Franchise History

BURLINGTON, VT -- Both Lumberjacks squads were back in action with busy a slate of games before the upcoming holiday break. The EHL team posted a 3-2-0 record over the last two weeks and currently sit in 2nd place in the New England Conference with an overall record of 22-6-1.

On the other end, the EHLP squad split their two games over this past weekend and remain in 5th place in their conference with a record of 12-12-4.

Just over week ago, the Lumberjacks traveled down to Newington, CT for the 4th league-wide showcase of the season and faced-off against the Walpole Express in their one and only game. Cory Doney put Vermont on the board first with a power-play goal just over 11 minutes into the 1st half. Egan Schmitt then found the back of the net early in the 2nd half to give the boys a 2-0 advantage. Both Frank Mondi and Zachary Booth scored just 25 seconds apart near the end of the frame and the Lumberjacks cruised to a 4-0 win, and they now hold a 6-1-0 record in showcase play this year. Connor Carbo stopped all 23 shots that he faced for his 1st shutout of the season.

Last Tuesday afternoon, the Lumberjacks headed back on the road again, this time to Hyannis, MA for a matchup against the Seahawks Hockey Club. Tuesday’s game marked the first out of three matchups this season between the two teams with the next two coming right after the holiday break. The Seahawks scored a goal early in the 1st and another early on in the 2nd period and took a 2-0 lead into the final 20 minutes. Two more goals in the 3rd put the Seahawks up by four, and despite a late power-play goal from Logan DiScanio, the Lumberjacks fell by a final score of 4-1. David Reduzzi was busy between the pipes, stopping 35 shots in the loss.

The very next afternoon, the squad traveled to Bedford, MA and squared off against the East Coast Wizards for the 3rd time this season. The Lumberjacks won the previous two games earlier in the year, each by just one goal, and are scheduled to play the Wizards one more time next month. DiScanio gave Vermont the lead with a power-play goal just past the seven-minute mark of the opening frame, but the Wizards quickly responded with a power-play goal of their own just a couple minutes later. Schmitt broke the tie early in the 2nd period on the man advantage and DiScanio added another power play goal exactly four minutes after which made it a 3-1 game. The Wizards got a goal back, but Schmitt added an empty netter in the final minute for his 13th goal of the season and the Lumberjacks won by a final score of 4-2. Carbo stopped 25 shots in the winning effort, for his 7th victory of the season.

This past Saturday night, the Lumberjacks welcomed the Express into town for a pair of games to wrap-up the regular season series between the two teams. The Express scored first on the man advantage followed by another goal early in the second frame, and took a 2-0 lead. DiScanio got a goal back for the Lumberjacks later in the period for his 24th of the year, which is tied for the team lead along with Geordan Buffoline. However, Walpole scored again late in the 2nd and three more times in the 3rd period, to win by a final score of 6-2. Will Roberts scored the lone goal in the 3rd frame on the power-play.

The very next day, the Lumberjacks played their final game before the holiday break and got off to a hot start as both Austin Marini and Jacob Dillion scored in the game’s first three minutes, to give Vermont to quick 2-0 advantage. The Express countered with a pair of goals of their own later in the period, but Buffoline gave the Lumberjacks back the lead in the final minute of the frame. Buffoline then completed the hat-trick in the 2nd period with two more goals, but Walpole once again followed suit, with a trio of goals in the frame to even things up a 5-5. After a scoreless 3rd period and overtime, the Lumberjacks won the extra point in the shootout.

This past weekend, the EHLP squad capped off their regular season series against the Express with a pair of games at home. In Saturday’s matchup, after both a scoreless 1st and 2nd period, the Express scored three unanswered goals in the final frame and the Lumberjacks fell by a final score of 3-0. Cam Isabelle stopped 23 shots in the losing effort.

On Sunday morning, Patrick Williams put Vermont ahead first with a power-play goal near the halfway point of the 1st period. However, the Express responded with a pair of goals later in the frame and took a 2-1 lead into the intermission. Nick Speckhart tied things up in the 2nd period with his 8th goal of the season near the end of the period, and then inn the first minute of the 3rd, Colby Anton gave the Lumberjacks the lead and Riley McBribe followed with a power-play goal a few minutes later to make it a two-goal advantage. Despite a late Walpole goal, the Lumberjacks held on for the 4-3 victory. Sam Fath turned away 28 shots for his 4th win of the season.

Both Lumberjacks squads will enjoy some well deserved time off now for the holidays.

The EHL won’t play again until Wednesday, January 8th, when they begin a two-game series at home against the Seahawks.

On the other hand, the EHLP team is off until January 3rd, where they are scheduled to host the Railers Jr. Hockey Club. 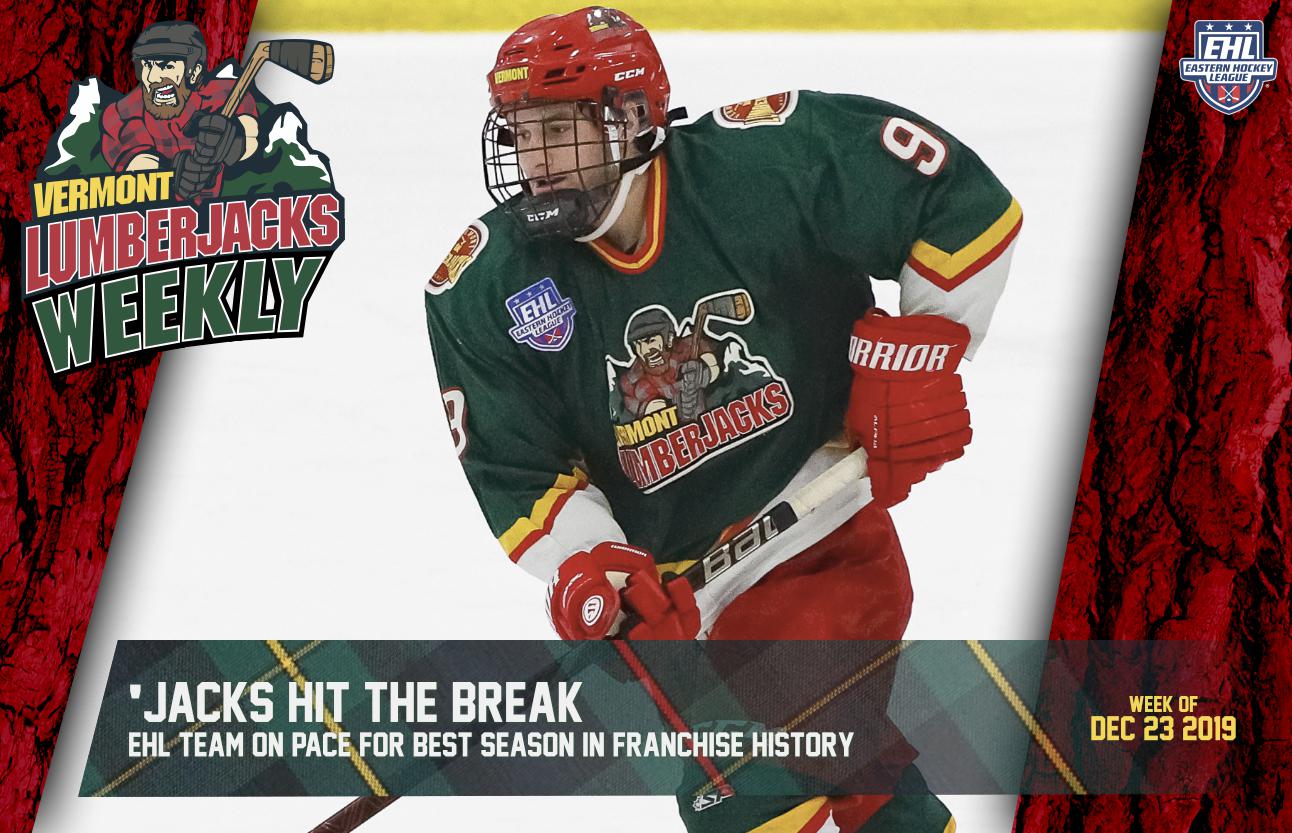