BURLINGTON, VT -- Both the Lumberjacks EHL and EHLP squads were back in action this past week after the long holiday break. The EHL team lost their first game back, but bounced back with three straight wins, including a sweep of the 5th and final league-wide showcase of the season. The Lumberjacks currently sit in 2nd place in the New England Conference with a record of 25-7-1, and trail the 1st-place Boston Jr. Rangers by just three points.

On the other end, the EHLP team won their only game last week and currently sit in 5th place in their conference with a mark of 13-12-4.

Last Wednesday, the EHL squad welcomed the Seahawks Hockey Club to town for a pair of matchups to wrap-up the regular season series with their conference opponent. Going into Wednesday’s game, the Seahawks had already beaten the Lumberjacks once this year, right before the holiday break. The Lumberjacks struck first last week though, as Egan Schmitt gave the Lumberjacks the lead on the power-play near the end of the 1st period. Luke Marsh scored his first goal as a Lumberjack early in the 2nd frame to give the boys a 2-0 advantage. The Seahawks responded at the end of the period with a power-play goal and cut the lead in half. Both Cam Roberts and the EHL’s leading scorer, Logan DiScanio, added two more goals near the beginning of the 3rd frame. However, the Seahawks rallied for three unanswered goals and tied the game up at 4-4. The Lumberjacks took the lead again on a power-play goal from Roberts, but the Seahawks scored twice in the final two minutes and the Lumberjacks fell by a final score of 6-5. Dillion Whalen stopped 22 shots in the loss.

The Lumberjacks got right back at it the very next day against the same opponent. After a scoreless 1st period, Connor Cameron got the boys on the board with a power-play goal just under eight minutes into the 2nd frame. Tyler Lisieski increased the lead to two with a tally just a few minutes later. In the 3rd, Cory Doney scored on the man advantage with just under seven minutes remaining and the Lumberjacks held on for the rest of the period, to win by a final score of 3-0. David Reduzzi was terrific between the pipes, stopping all 37 shots that he faced for his 2nd shutout of the season.

On Sunday, the EHL team headed down to Exeter, NH, for the 5th and final league-wide showcase of the 2019-20 season. On the first day, the Lumberjacks matched up against the Connecticut Roughriders for the first and only time this year. Austin Marini scored the game’s first goal just over 14 minutes into the contest. Just a couple minutes later, Jordan Michuad gave the boys a two-goal advantage on the power-play, for his 10th point of the season. However, the Roughriders responded with three unanswered goals and took a 3-2 lead. With around six minutes left on the clock, Marini notched a power-play goal to even things back up again. After a scoreless rest of the frame the game headed into overtime, where there was also no score. The Lumberjacks won the shootout and left with the extra point. Reduzzi turned away 23 shots in shootout victory.

On the final day of the showcase, Vermont squared-up against the New Jersey 87s. Going into the game, the 87's were in the top spot in the Mid-Atlantic conference and as expected, there were plenty of scouts from various colleges in attendance. The 87's struck first with a goal just over five minutes into the contest, but recent Stevenson University commit Evan Beers, knotted the game up at 1-1 halfway through the 2nd frame. After a scoreless rest of regulation time, DiScanio sniped from the top of the circle on the power-play to give the Lumberjacks the overtime win and improved their overall showcase record up to 8-1-0 for the year. Reduzzi stopped 21 shots for his 12th win of the campaign, and thus earned himself Warrior Hockey Star of the Week honors.

Last Sunday, the EHLP squad capped off their regular season series with the Connecticut Chiefs. In the previous five matchups against their conference opponent, the Lumberjacks held a 4-0-1 record. The Chiefs got the game’s first goal on Sunday, but Alex Gamarra notched his first goal as a Lumberjack on the man advantage to tie the game up at 1-1. After a scoreless 2nd period, Brandon Clark gave the boys the lead in the opening minutes of the 3rd for his team-leading 30th point of the year. Colby Anton added an empty-net goal in the final minute to seal the 3-1 win. Alex Herman stood tall in net, stopping 20 shots for his 5th victory of the season.

Both squads will get back to work this week with a busy slate of games ahead. The EHL team will host the Seacoast Spartans this upcoming weekend. Saturday’s game is scheduled for 7:50pm, and Sunday’s matchup will be played at 11:30am.

On the other hand, the EHLP squad will travel down to Worcester for three games at the 3rd and final league-wide showcase of the season. The Lumberjacks are set to face-off against the New Jersey 87's on Saturday at 11:25am, followed by a pair of games on Sunday against the Boston Jr. Rangers and the Philadelphia Revolution at 8:00am and 5:00pm respectively. 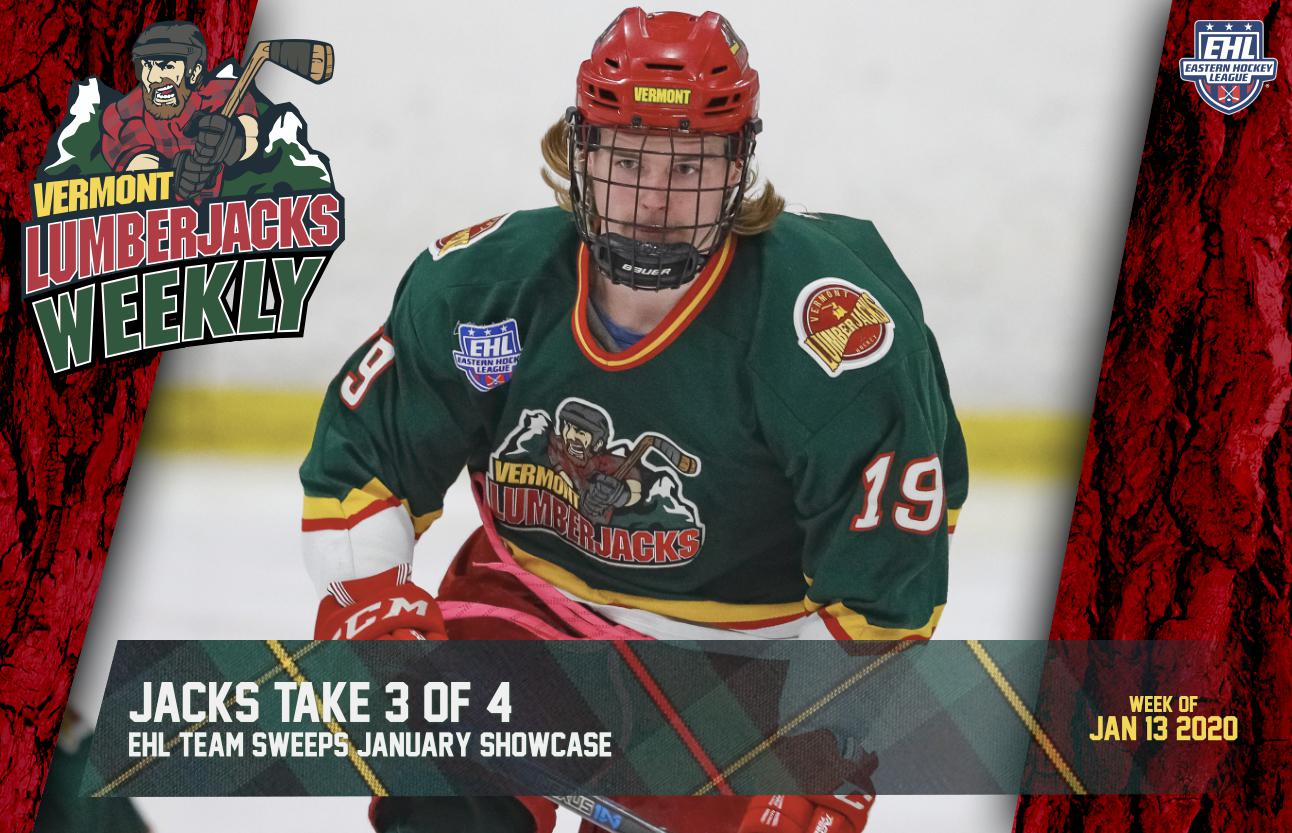