EHL Team Prepped for #1 vs #2 Showdown

BURLINGTON ,VT -- Both Lumberjacks’ squads were back in action this past week. The EHL team extended their winning streak out to five games with a pair of wins over the weekend, and now just trail the 1st-place Boston Jr. Rangers by just two points in the New England Conference with a record of 27-7-1.

On the other end, the EHLP team posted a 1-1-1 record at the 3rd and final league-wide showcase of the season in Worcester, and currently sit in 5th place in their conference with a record of 14-13-5.

This past Saturday, the EHL squad welcomed the Seacoast Spartans to town for a pair of matchups over the weekend. Geordan Buffoline scored just 1:20 into the contest to give the Lumberjacks the early lead, but the Spartans evened things up not long after. Austin Marini gave the boys back the lead around the 12-minute mark of the frame, but the Spartans responded with a pair of goals this time and took a 3-2 advantage. However, Nico Hemming tied the game up at 3-3 near the end of the frame for his first goal in his very first game as a Lumberjack.

Vermont put their foot on the gas in the 2nd period with four unanswered goals to take a 7-3 lead into the 3rd. Dylan Infantino (2), Will Roberts, and Buffoline had the tallies. Frank Mondi added an insurance goal in the final frame and the Lumberjacks cruised to a 8-4 win. David Reduzzi turned away 33 shots in the victory.

After a scoreless 1st period on Sunday, Buffoline found the back of the net on the man advantage and gave the boys the lead. Egan Schmitt scored another power-play goal near the end of the frame and Buffoline added a third power-play goal in the final period, which led the Lumberjacks to a 3-1 win. Reduzzi was terrific in net, stopping 29 out of 30 shots for his 14th victory of the season.

Last Saturday and Sunday, the EHLP squad took part in the 3rd and final league-wide showcase of the season down in Worcester, MA. On the first day, the Lumberjacks faced-off against the New Jersey 87s for the first and only time this season. Colby Anton got Vermont on the board first, with a goal just under seven minutes into the contest. The 87s answered back in a hurry, but Alex Gamarra gave the boys back the lead in the 2nd half. After the 87s tied the game up once again, Riley McBride, scored the eventual game winner with 4:55 reaming on the clock. Anton sealed the deal in the final minute with an empty-netter and the Lumberjacks went on the win by a final score of 4-2. Alex Herman stood tall in net with 40 saves on 42 shots for his 6th win of the season, and first honor as the EHLP Goalie of the Week.

On Sunday morning, the Lumberjacks squared-off against the Boston Jr. Rangers for the first out of five meetings between the two teams this season. The Rangers came out strong in the first half with five unanswered goals, along with four more in the 2nd half and won by a final score of 9-1. Evan Parent had the lone goal for the Lumberjacks, for his 5th tally of the year.

On Sunday afternoon, the boys got right back to work with a matchup against the Philadelphia Revolution. The Revolution got the game's first two goals, but Vermont battled back in the 2nd half with goals from Luke Dion and Anton to force overtime. After a scoreless overtime period, the Revolution unfortunately took the extra point in the shootout. Sam Fath stopped 31 shots in the shootout loss.

Both Lumberjacks squads will get back to work this upcoming weekend as the EHL and EHLP teams will travel down to Tewksbury for a pair of games against the Boston Jr. Rangers on Friday and Saturday.

The times for all of the games are listed below: 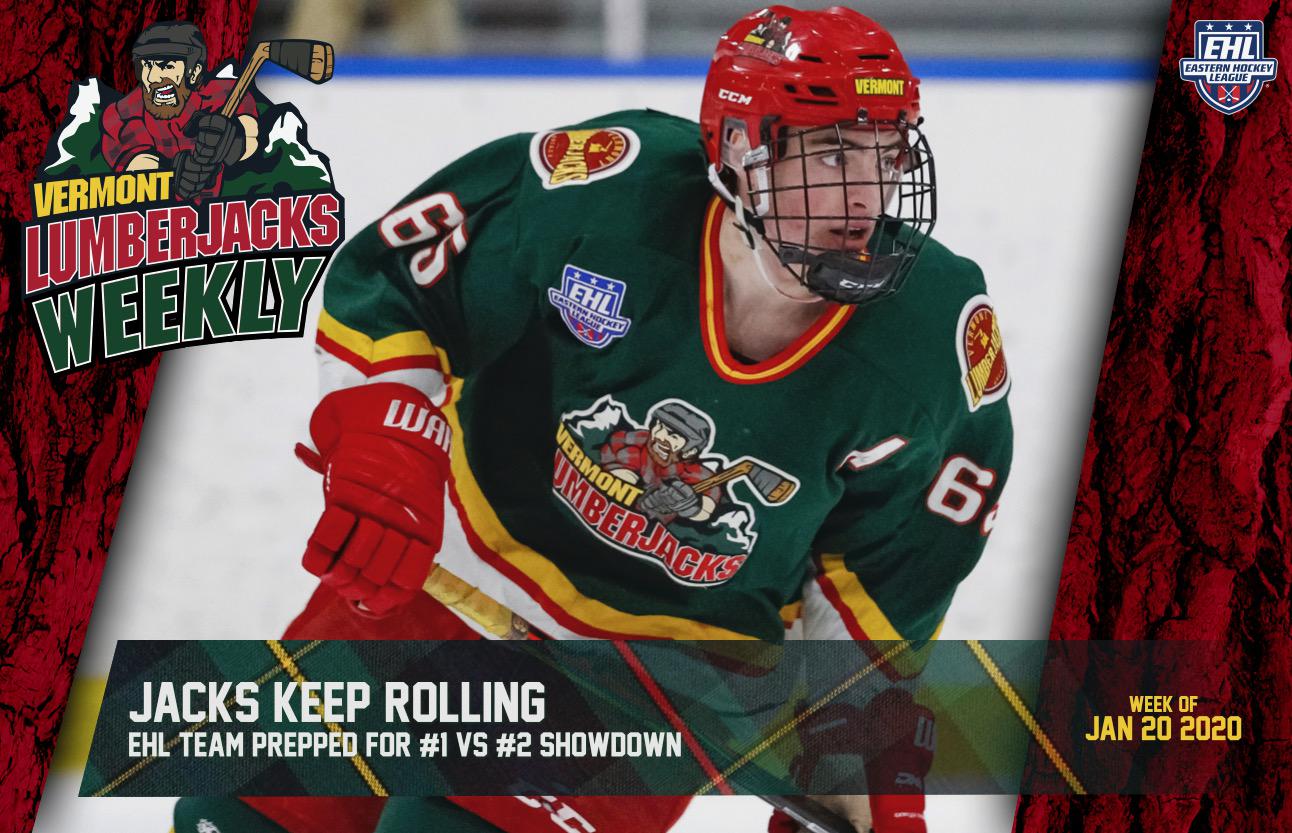