BURLINGTON, VT -- Both Lumberjacks’ squads hit the road this past weekend with each team playing a pair of games in Tewksbury, MA against the Boston Jr. Rangers. The EHL split the crucial weekend series and remain in 2nd place in the New England Conference with a record of 28-8-1.

The EHLP team dropped both of their matchups over the weekend, but still currently sit in a playoff spot at 5th place in their conference with a record of 14-15-5.

This past Friday, the EHL squad made their way down to Tewksbury for the first and second of four matchups between the two teams this season. The best record in the EHL was on the line and could also very well be a preview for a potential Frozen Finals matchup. The Rangers grabbed the lead just 18 seconds into the game, but Cam Roberts responded against his former team around the 12-minute mark of the 2nd period. The Rangers answered back however, with three unanswered goals in the frame and took a 4-1 lead into the final intermission. Jackson Aldrich cut the deficit down to two goals with a tally early in the 3rd. With an assist on Aldrich’s goal, Logan DiScanio became the all-time regular season leading scorer in EHL history with 57 goals and 109 assists in 122 games. DiScanio surpassed the mark set by his future teammate at UMass Boston, Chris Peters. Just a few minutes later Cam Roberts scored again on the power play which made it a 4-3 game, but unfortunately the Lumberjacks couldn't find the back of the net again and lost by one goal. David Reduzzi turned away 42 shots in the losing effort.

The very next afternoon, the same two teams went at it again and this time Vermont struck first as Egan Schmitt beat the Rangers goalie just passed the 12-minute mark of the 1st period. The Rangers responded with a goal of their own a few minutes later, but DiScanio beat the buzzer and scored with one second left on the clock, thanks in part from a perfect cross-ice pass from Dan Barry. The Rangers answered back with a goal in the first minute of the 2nd frame, but Aldrich scored just under four minutes later, which gave the Lumberjacks back the lead. After the Rangers evened things up again, both Cam Roberts and Austin Marini scored later in the period to give Vermont a 5-3 advantage going into the final intermission. DiScanio gave the Lumberjacks some insurance later on the man advantage in the 3rd period, and the Lumberjacks cruised to a 6-4 win. Reduzzi stopped 35 shots for his 15th win of the season.

Last Friday, the EHLP squad also faced-off against the Boston Jr. Rangers for the second and third times this season. The Rangers won the first game between the two teams at last week’s showcase and there are two more games remaining on the schedule between the rivals after last weekend. Reinhard Venter scored his first goal of the season for the Lumberjacks just under six minutes into the contest. However, the Rangers responded with two goals in the 2nd period, and three more in the 3rd, to win the game by a final score of 5-1. Cam Isabelle was busy in net, stopping 47 shots in the losing effort.

The two teams squared off again the very next afternoon and it didn't take long for Colby Anton to find the back of the net just over four minutes into the contest. The Rangers responded with a pair of goals later in the frame, but Riley McBribe got one back in the first minute of the 2nd period to knot up the game at 2-2. After the Rangers scored the game’s next two goals, both Robbie Baker and Anton scored just 4:30 apart to tie the game back up at four goals apiece. The back and forth action continued as the Rangers scored twice to end the high scoring 2nd period, but Anton and Baker lit the lamp again, both on the power play, which made it a 6-6 game. However, the Rangers scored two more times in the final minute of the game including an empty-net tally, to win by a final score of 8-6.

Both Lumberjacks’ squads are back at home this upcoming week as the EHL team is set to face-off against the East Coast Wizards tomorrow at 12:30pm, and will then host the New England Wolves for a pair of games this Saturday and Sunday to wrap-up their regular season series with the conference rival. Saturday’s matchup is scheduled for 7:00pm, while Sunday’s game is set for 12:00pm.

The EHLP team is also set to cap off their regular season series against the Wolves, with Saturday’s game scheduled for 4:00pm, and Sunday’s matchup for 9:00am. 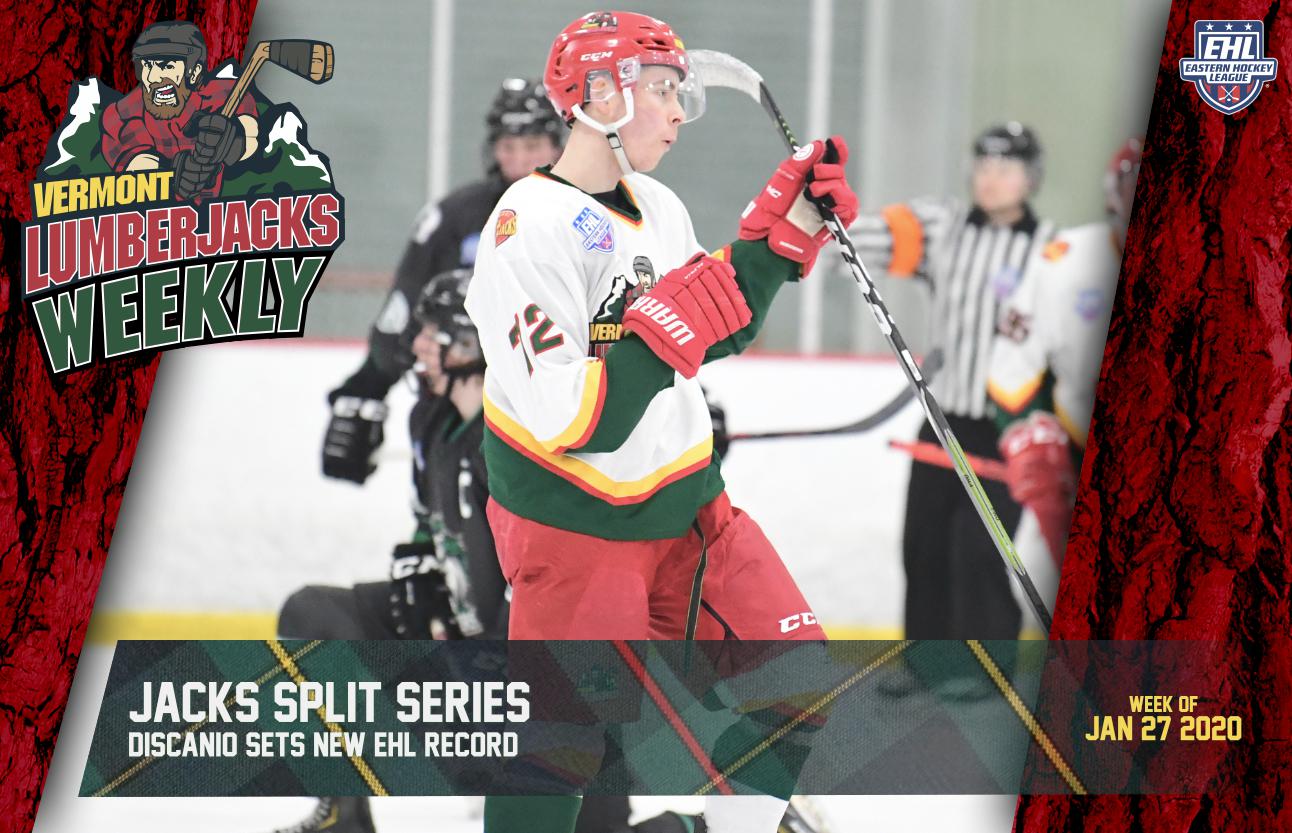