BURLINGTON, VT -- Both Lumberjacks squads were back in action this past week, as the EHL team posted a 2-1-0 record in three home games. After the wins, the Lumberjacks still currently sit in 2nd place in the New England Conference with a record of 30-9-1, and only trail the 1st place Boston Jr. Rangers by just two points.

The EHLP squad dropped both of their games over the weekend, but still remain in 5th place in their conference with an overall record of 14-17-5.

Last Wednesday, the EHL squad hosted the East Coast Wizards to finish off their regular season series against their conference opponent. The Lumberjacks held a perfect 3-0-0 record in three close games against the Wizards this year, and were eyeing the season sweep. The Wizards grabbed the early lead just 52 seconds into the game, but the Lumberjacks quickly answered back with a pair of goals around five minutes later from Evan Beers and Geordan Buffoline, which gave the boys a 2-1 lead. Buffoline added another goal later on in the frame to give Vermont a 3-1 advantage. Jordan Michaud notched his 3rd goal of the season near the four-minute mark of the 2nd period, but the Wizards responded a couple minutes later and cut the lead back down to 4-2. The EHL’s leading scorer, Logan DiScanio, added some insurance in the final minutes of the frame and the Lumberjacks held on for the rest of the 3rd period and won by a final score of 5-2. Dillion Whalen turned aside 39 shots in net for his 7th win of the season.

On Saturday and Sunday, the Lumberjacks hosted the New England Wolves for the final two games of the regular season between the two divisional rivals. The Wolves won the previous two matchups back in November and got off to an early 2-0 lead on Saturday. DiScanio cut the lead in half though in the winding minutes of the 2nd period, and Jackson Aldrich found the back of the net in the opening minutes of the 3rd which knotted up the game at 2-2. Ben Rouillard then notched the game-winning goal just past the 14-minute mark of the final frame and Zachary Booth added an empty-netter to seal the 4-2 win. David Reduzzi stopped 25 shots between the pipes for his 16th victory of the year.

The same two teams went at it the very next day and this time the Lumberjacks took the early lead with a trio of goals in the 1st period from Buffoline (power-play), Egan Schmitt (short-handed), and Austin Marini. However, the Wolves responded with three unanswered goals of their own which tied the game up at three goals apiece. Buffoline then scored his 32nd goal and 64th point of the season, which put the Lumberjacks ahead 4-3. The Ballston Spa, NY native is currently 2nd place in the entire EHL in scoring with those 64 points and only trails his teammate DiScanio. The Wolves answered back with a goal in both the final minute of the 2nd period and first minute of the 3rd, and took back the lead. Booth tied things up just three minutes later at 5-5, but the Wolves scored five more times in the final 10 minutes, and won by a final score of 10-6. Rouillard had the other 3rd period tally for Vermont.

The EHLP squad also capped off their regular season series against the Wolves with a pair of games at home over the weekend. The Wolves struck first with two goals right out of the gate, but Josh Laravia cut the lead in half just past the four-minute mark of the 1st period. New England responded with a pair of goals in the 2nd frame, and another early in the 3rd period, to take a 5-1 advantage. Alex Gamarra converted on the power-play later on in the period, but the Lumberjacks fell by a final score of 6-2.

After a scoreless 1st period on Sunday, the Wolves struck first with a goal three minutes into the 2nd frame. Colby Anton tied the game up just past the 13-minute mark of the 3rd, for his 20th goal of the season. However, the Wolves scored two more times later in the period and won by a final score of 3-1. Cam Isabelle stopped 32 shots in the losing effort.

Both the EHL and EHLP squads will get back to work this upcoming weekend as each team will host the Boston Jr. Rangers for a pair of matchups on both Saturday and Sunday. Satruday’s EHL game is scheduled for 8:00pm, while Sunday’s will be played at 12:00pm.

On the other end, the Premier team will face-off at 5:00pm on Saturday, followed by a 9:00am puck drop the following day. 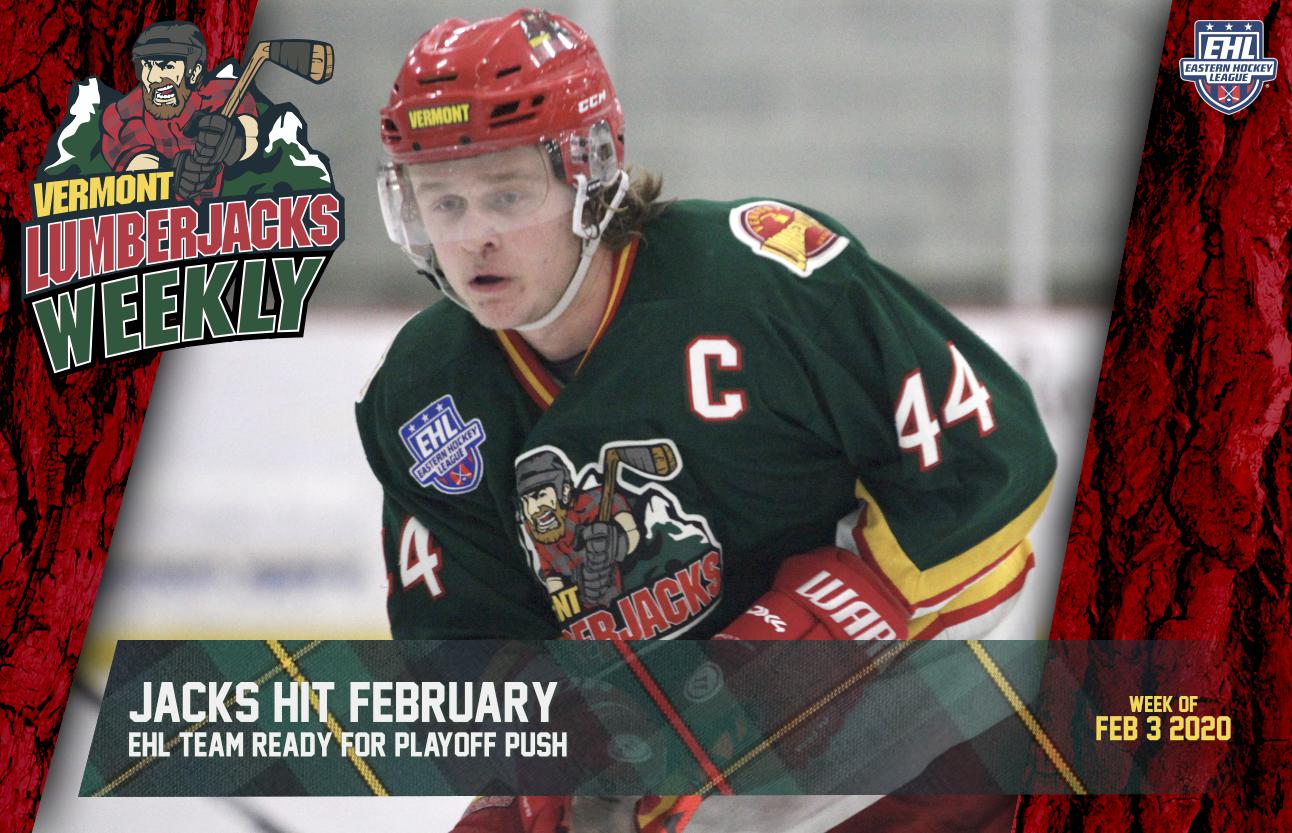