BURLINGTON, VT -- Both the EHL and EHLP teams were back in action this past weekend, each with a pair of games at home against the Boston Jr. Rangers. The EHL team won the first game in a shootout, but dropped the second matchup, and currently still sit in 2nd place in the New England Conference with a record of 31-10-1.

The EHLP squad lost both of their games over the weekend, and now sit in 6th place in their conference with an overall record of 14-19-5, but still have a comfortable lead for home ice advantage in the Play-In Round.

This past Saturday, the EHL squad hosted the 1st place Boston Jr. Rangers for the first of two matchups against their rival over the weekend. Last weekend’s games wrapped the regular season series between the two top EHL teams, with both teams splitting the first two games against each other at the end of last month. The Rangers grabbed an early two-goal lead in the first period, but Dan Barry answered on the power-play near the end of the frame which cut the deficit in half. However, Boston responded with two more quick goals in the first couple minutes of the 2nd frame and took a 4-1 lead. The EHL’s leading scorer, Logan DiScanio, made it a 4-2 game around the 13-minute mark of the period, and Ben Rouillard cut the deficit to a goal just over a minute after. The Rangers scored at the end of the frame and took a 5-3 lead into the last intermission, but Will Roberts got a goal back for Vermont just 32 seconds into the 3rd. The recent University of Southern Maine commit, Austin Marini, evened things up at 5-5 near the halfway point of the 3rd. After a scoreless rest of the period and overtime, the Lumberjacks earned the extra point in the shootout. Dillion Whalen turned away 31 shots in relief, for his 8th win of the season.

On Sunday, the same two teams went at it again and the Lumberjacks fell in an early 2-0 hole. However, just like Saturday, they battled back with a pair of goals in the 2nd period, by both Marini and Geordan Buffoline, which knotted up the game at 2-2. However, the Rangers scored near the seven-minute mark of the 3rd on the man advantage, and held on for the rest of the game as the Lumberjacks fell by a final score of 3-2.

The Premier squad also hosted the Rangers for a pair of games over the weekend which wrapped up their regular season series against their conference opponent. On Saturday, Boston grabbed the early lead in the 1st period, but both Macauley Bernier and Colby Anton responded in the 2nd frame and gave Vermont a 2-1 lead. The Rangers tied the game up near the end of the period and scored two more times in the 3rd though, and took a 4-2 advantage. Despite a last minute power-play goal from Brandon Clark, the Lumberjacks fell by a final score of 4-3. Alex Herman stopped 28 shots in the losing effort.

On Sunday, the Rangers scored once in the 1st period and twice in the 2nd, and took a 3-0 lead into the final intermission. Maverick King scored on the power-play with 14 minutes remaining, but Boston responded with two more goals later in the frame, as Vermont fell by a final score of 5-1. Sam Fath made 30 saves in the losing effort.

Both Lumberjacks’ squads are back in action this upcoming week as the EHL team will hit the road with games in Exeter, NH, tomorrow and Thursday against the Seacoast Spartans. Tomorrow’s game will be played at 1:30pm, while Thursday’s matchup is set for 12:30pm.

On the other end, the EHLP squad will stay home for a pair of games this upcoming Saturday and Sunday against the Valley Jr. Warriors and the Railers Jr. Hockey Club. Saturday’s matchup against the Warriors is set for 4:00pm, while Sunday’s game against the Railers is scheduled for a 1:50pm puck drop. 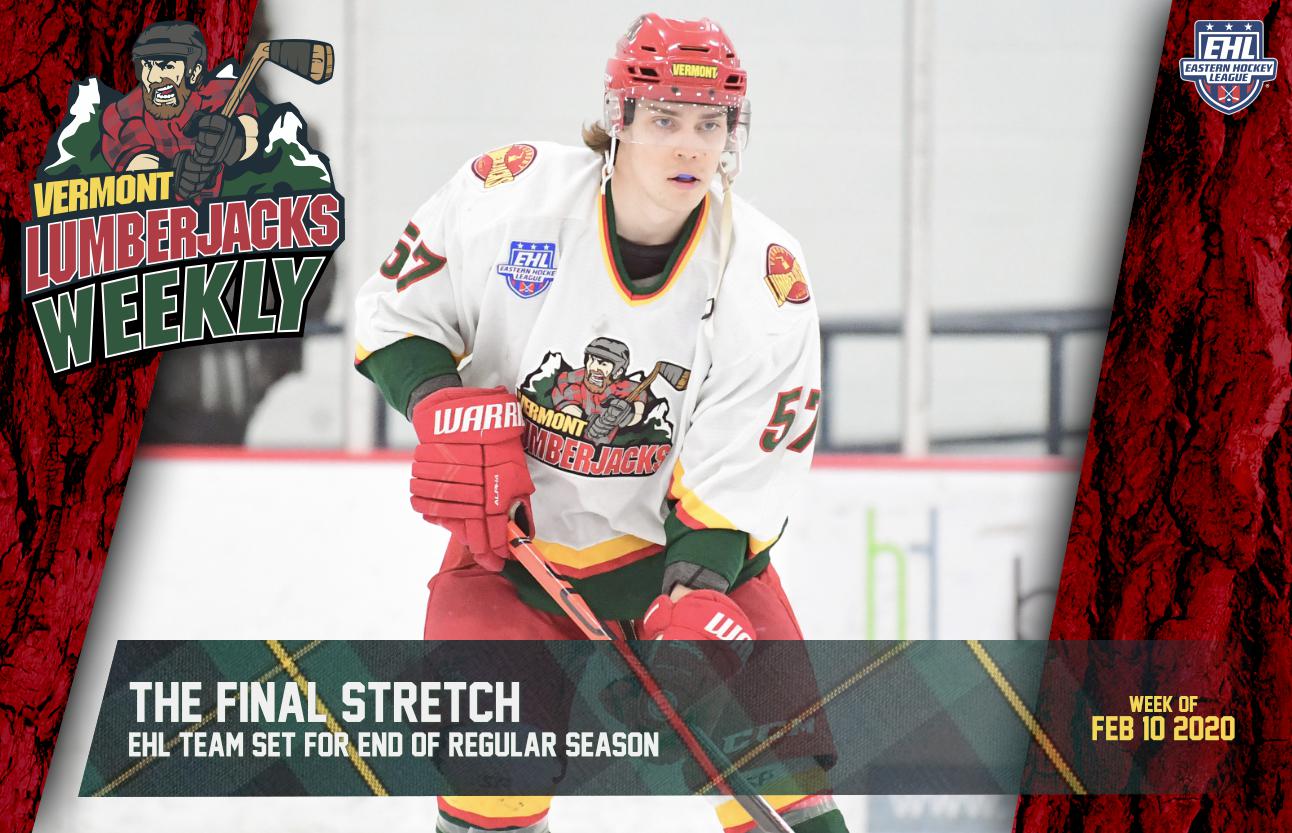