BURLINGTON, VT -- Both the EHL and EHLP squads were back in action this past week in the final stretch of the regular season. The EHL team split a pair of games against the Seacoast Spartans, and currently still sit in 2nd place in the New England Conference with a record of 32-11-1 with just 2 games remaining.

The Premier squad also posted a 1-1-0 record last week, and still comfortably remain in 6th place in their conference with a record of 15-20-5, also with just two games left in the regular season.

Last Wednesday afternoon, the EHL squad traveled down to Exeter, NH to wrap-up their regular season series against the Seacoast Spartans. Vermont won the previous two games against the their conference opponent back in January, by a combined score of 11-5. Cam Roberts put the Lumberjacks on the board first with a power-play goal just passed the nine-minute mark of the 1st period for his 8th tally of the season. Egan Schmitt doubled the lead in the opening minutes of the 2nd frame, but the Spartans cut the lead in half just 32 seconds after. The EHL’s front runner for the MVP award, Logan DiScanio, scored near the halfway point of the period and Jackson Aldrich added another goal near the end of the frame, which put Vermont ahead 4-1 going into the final period. The Spartans responded with a pair of goals early in the 3rd, but DiScanio added an empty-net goal in the final seconds for his 33rd of the year, and the Lumberjacks won by final score of 5-3. David Reduzzi stopped 19 shots for his 17th win of the season, which ranks 3rd in the entire EHL.

The same two teams went at it the very next afternoon, and Cory Doney gave the boys the early lead on the man advantage, just over six minutes into the contest. However, the Spartans answered with a power-play goal of their own later in the frame, along with 2 more unanswered goals in the 2nd period, and took a 3-1 lead going into the final intermission. Jacob Dillion cut the deficit down to one, with his 6th goal of the season in the opening minutes of the period, but the Spartans scored later in the frame and held on for the 4-2 win. Reduzzi turned away 22 shots in the losing effort.

On Saturday afternoon, the EHLP squad hosted the Valley Jr. Warriors which marked the 4th game between the two conference opponents this season. The Lumberjacks owned a 2-1-0 record against their rival going into last weekend, with two more games remaining against them. Alex Reyes put Vermont ahead first with a goal near the 12-minute mark of he 1st period. After a scoreless rest of the frame, Colby Anton converted on the man advantage early in the 2nd period, with his 22nd goal of the year which made it 2-0. The Lumberjacks leading scorer, Brandon Clark, scored later in the period, and again in the 3rd, for his 4th point of the game and the Lumberjacks cruised to a 4-0 victory. Cam Isabelle stopped all 22 shots that came his way for his 5th win and 1st shutout of the season.

The very next afternoon, the Railers Jr. Hockey Club came into town and wrapped up their regular season series against the Lumberjacks. In the previous three matchups between the two teams, the Lumberjacks held a 0-2-1 record against their conference opponent. The Railers grabbed the early lead eight minutes into the game, and scored three more times in the 2nd period to take a 4-0 lead. Clark responded in the 1st minute of the 3rd period for his 42nd point of the season, but Worcester scored two more times later in the frame and won by a final score of 6-1.

Both Lumberjacks’ squads are set to wrap up the regular season this upcoming weekend in Haverhill, MA, each with a pair of games against the Valley Jr. Warriors. The EHL team will play Saturday at 4:40pm, followed by a Sunday matchup to cap off their regular season schedule at 11:50am.

On the other end, the EHLP squad is set to play Saturday night at 7:30pm, and will then turn around on Sunday morning for a 9:00am puck drop. 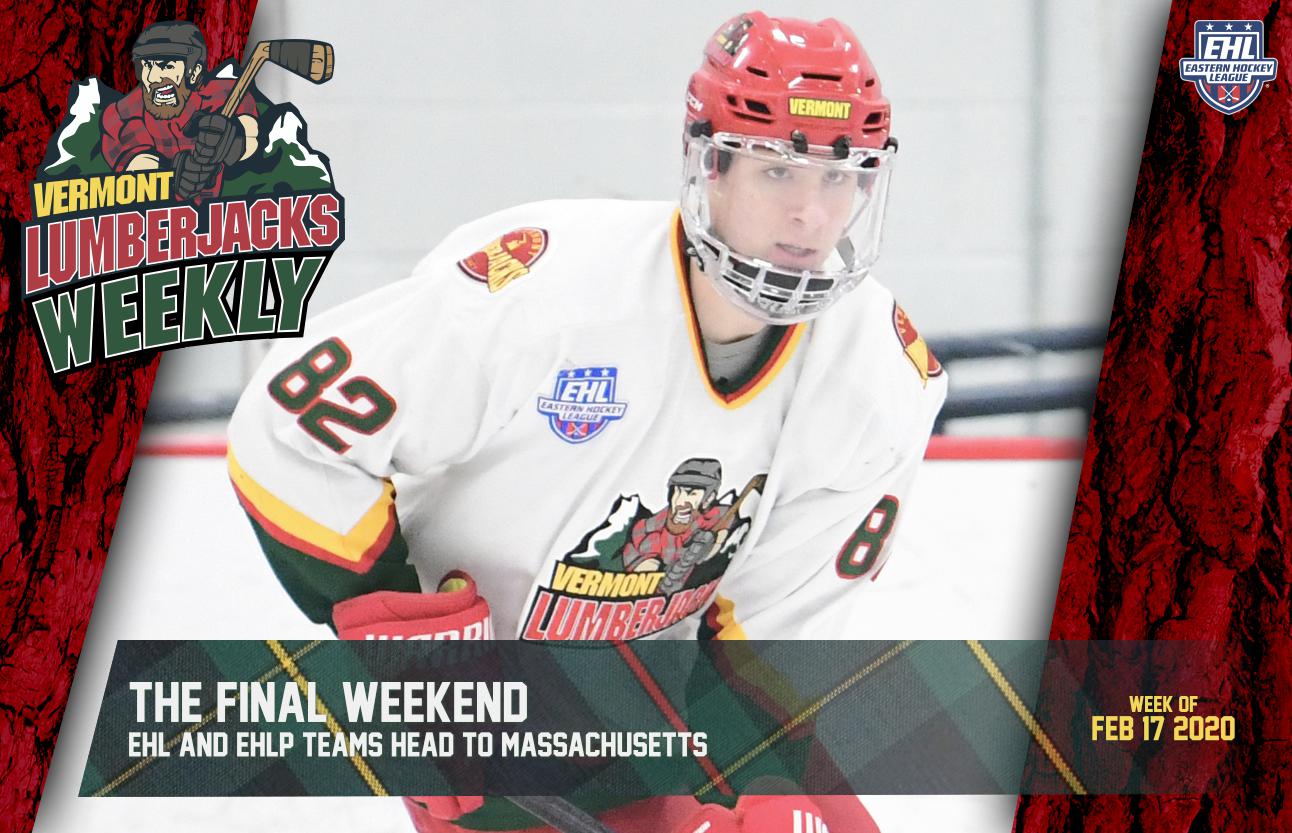