BURLINGTON, VT -- Both Lumberjacks’ squads ended their regular seasons on a high note this past weekend, and are now set to turn the page to the EHL and EHLP playoffs. The EHL team won both of their matchups and currently sit in 2nd place in the New England Conference with a final record of 34-11-1. The Lumberjacks are one point ahead of the 3rd place New Hampshire Avalanche, who have one game remaining.

On the other end, the EHLP squad also won both of their games to close out the season, and are locked into the #5 seed in their conference with an overall record of 17-20-5. The Lumberjacks are currently waiting to find out who will finish in 4th place, between the New Hampshire Avalanche, New England Wolves and Railers Jr. Hockey Club.

On Saturday night, the EHL squad traveled down to Haverhill, MA, and squared-off against the Valley Jr. Warriors for a pair of matchups to close out the regular season. The Lumberjacks held a 1-0-1 record against their conference opponent going into last weekend with those games dating all the way back to September. Geordan Buffoline notched his 34th goal of the season, which put Vermont on the board first just over five minutes into the game. Near the end of the 1st period, Jensen Dodge made it a 2-0 game and the boys didn't look back from their. Cam Roberts, Logan DiScanio, and Frank Mondi added goals in the 2nd frame and the Lumberjacks took a 5-2 lead into the final frame. Both Will Roberts and Austin Marini added some insurance goals in the 3rd and Vermont cruised to a 7-3 win. David Reduzzi turned away 21 shots between the pipes, for his team-leading 18th win of the season.

The very next afternoon, the Lumberjacks wrapped-up their regular season against the Warriors and took a quick lead when Connor Cameron found the back of the net just under nine minutes into the contest. Marini doubled the lead in the 2nd frame for his 22nd goal of the season. Vermont slammed the door shut in the 3rd with three more goals from Cameron, Dan Barry, and Will Roberts, to win by a final score of 5-0. Dillion Whalen stopped all 26 shots that he faced for his 9th win, and 1st shutout of the season.

On Saturday night, the EHLP squad also traveled down to Haverhill, MA, for a pair of games which wrapped-up the regular season. Going into the weekend, the Lumberjacks held a 3-1-0 record against their conference opponent and got off to a quick start as Raymond Miller found the back of the net just 1:47 into the game. Macauley Bernier and Miller added two more goals in the period which gave Vermont a 3-0 lead. The Warriors got two goals back in the 2nd frame, but Josh Laravia responded with a pair of goals of his own and gave the Lumberjacks a 5-2 advantage. The flood gates open up in the 3rd as Vermont scored four more times and won the game by a final score of 9-3. Bernier, Brandon Clark (2), and Riley McBride scored the 3rd period goals. Sam Fath stopped 9 shots in net for his 5th win of the season.

On Sunday afternoon, the EHLP squad also capped off their regular season against the Warriors. Reinhard Venter scored the game’s first goal near the end of the 1st period, which gave the Lumberjacks the early advantage. Vermont scored three more times in the 2nd frame and once more in the 3rd, to cruise to a 5-0 win. Colby Anton (2), Tyler Penree, and Venter had the tallies, and Cam Isabelle stopped all 16 shots that he faced for his 6th win and 2nd shutout of the year. 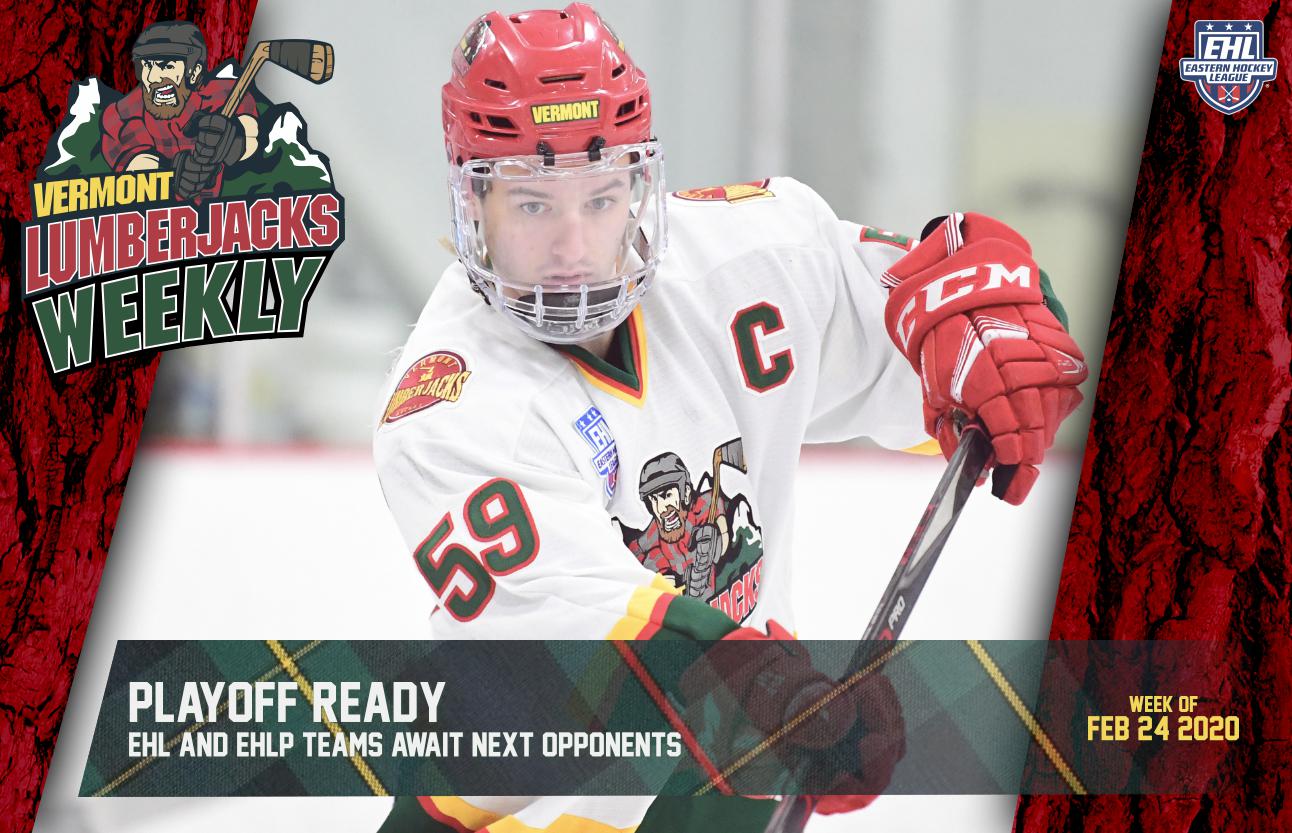