BURLINGTON, VT -- While both Lumberjacks' squads get ready for their upcoming playoff matchups, let’s take a look back on some of the key contributors to each team’s 2019-20 regular season campaign.

The EHL’s front runner for the MVP award, Logan DiScanio, led both the team and the entire league with 91 points (34 goals and 57 assists). The Umass Boston commit also led the EHL in the assist category. As for three-year Lumberjack forward Geordan Buffoline, he finished 2nd in the EHL in points with 69 on the year, and was tied with DiScanio for the team lead in goals with 34. Austin Marini, who committed to the University of Southern Maine earlier this year, finished 3rd on the team in points with 56 (22 goals and 34 assists). So far a total of 12 Lumberjacks players have committed to colleges this season, with Connor Carbo currently playing for Wentworth Institute of Technology and already making a huge impact. Carbo is currently starting for the Leopards in their playoff run, and has stopped a combined 80 shots in their two wins to date, including one over #7 University of New England. The former Lumberjacks goalie will look to help guide Wentworth to a birth in the NCAA Division III National Tournament this Saturday, as they take on Endicott College in the CCC Championship.

The EHL squad had solid play from their defensive core during the regular season as Evan Beers led the way with 30 points (7 goals and 23 assists). Both Cory Doney and Dan Barry were not far behind with 29 points apiece. Beers is set to start his collegiate career at Stevenson University this fall, while Doney will attend Plattsburgh State and Barry will set off for Nichols College. Other college commits on the team include, Jackson Aldrich who had 15 points this season and will be moving on to Southern New Hampshire University this fall, while  Jensen Dodge (7 goals and 11 assists) will play for Morrisville State. Also joining Dodge at Morrisville, is defenseman Jordan Michaud who accumulated 3 goals and 16 assists for 19 points on the year. Tyler Lisieski is set to attend SUNY Potsdam (1 goal and 14 assists), and just the other day, both Cam Roberts and Will Roberts committed to Assumption College. The twin brothers combined for 44 points during the regular season. Will collected 8 goals and 15 assists, while Cam had 9 goals and 12 assists.

A lot of EHLP Lumberjacks from the past also made impacts as Egan Schmitt was 4th on the team in points with 38. Jacob Dillion collected 17 points, Zachary Booth had 16, Frank Mondi also had 16, Connor Cameron had 13, and Ben Rouillard earned 9. The goaltending crew for the EHL also had themselves a nice year with David Reduzzi leading the way with an 18-7-0 record, and a 2.84 GAA (2 shutouts). Dillion Whalen posted a 9-1-0 record with a 2.77 GAA, and Connor Carbo, who joined Wentworth halfway through the season, had a 7-3-0 record with a 2.66 GAA.

Going into the EHLP playoffs, Brandon Clark led the team in scoring with 47 total points (18 goals and 29 assists), while Colby Anton led the squad in goals with 24 (36 points). Riley McBride finished 2nd on the team in points with 42 (15 goals and 27 assists). Both Aaron Damren and Nick Speckhart were the leaders on the blue line, with Damren posting 21 points (2 goals 19 assists) and Speckhart tallying 19 (8 goals and 11 assists). Alex Herman and Cam Isabelle led the way in net, each with 6 wins, but Sam Fath wasn't far behind with 5. Isabelle accumulated the lowest GAA on the team at 3.04.

The EHL squad will enter the playoffs as a #3 seed and are set to face-off against the Seacoast Spartans in the First Round (best-of-three series). The two teams played 4 times this season, with the Lumberjacks posting a 3-1-0 record against the Spartans. The entire series will be played at Leddy Arena with game #1 taking place on Saturday afternoon at 12:50pm. Game #2 is scheduled for Sunday at 11:30am, and game #3 (if necessary) is set for Monday at 1:00pm.

On the other end, the EHLP team is set to enter the postseason as a #5 seed and will match-up against the New England Wolves in the First Round (best-of-three series). In the 4 matchups during the regular season, The Wolves won 3, but the Lumberjacks knocked off their rival by a score of 4-2 last month. Game #1 is set for 6:00pm on Saturday, game #2 will be played at 2:15pm on Sunday, and if necessary, game #3 is scheduled for 10:30am on Monday. 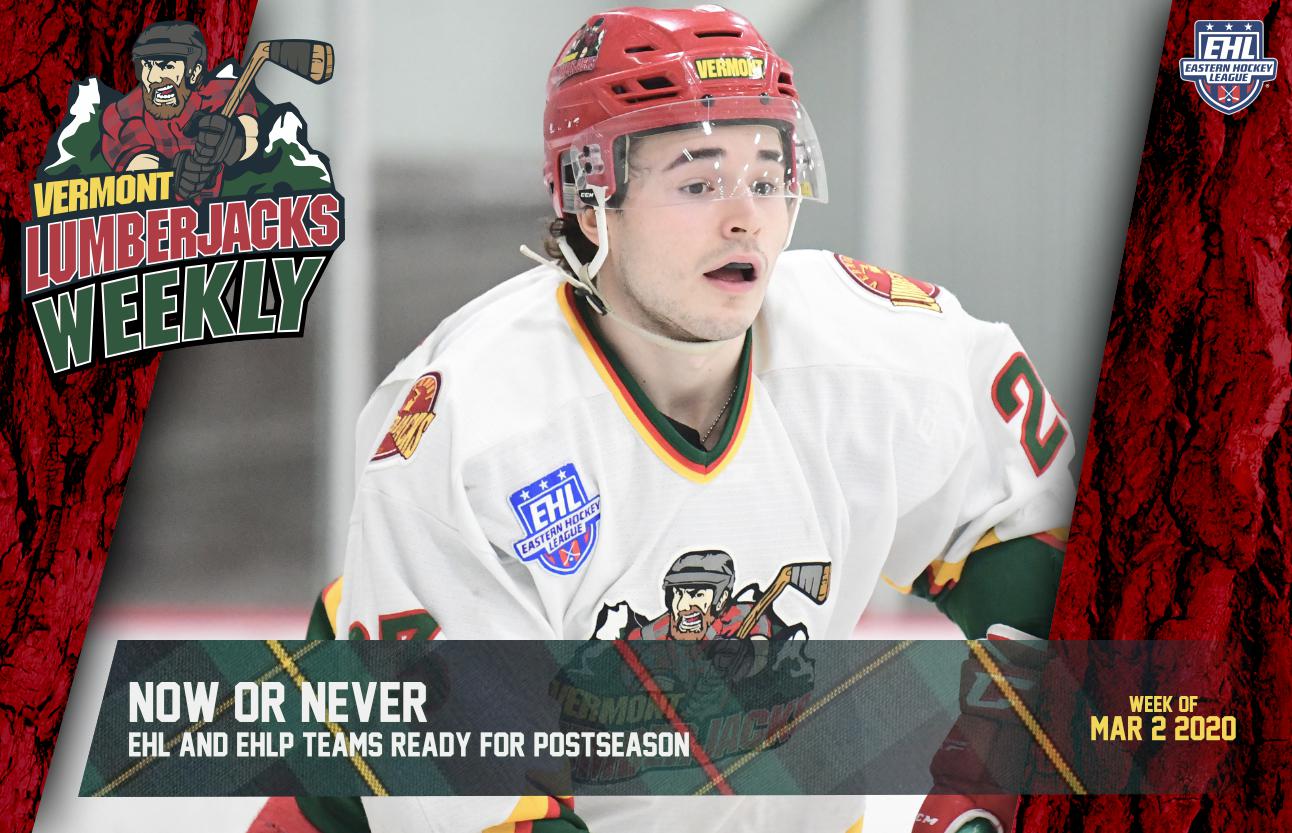