BURLINGTON, VT -- It was a busy weekend for the Lumberjacks organization as both the EHL and EHLP teams each hit the road to kick-off showcase play. The EHL team faced-off against a pair of Mid-Atlantic Division foes this weekend, splitting their 2 contests at Rodman Arena. The EHLP was dealt a similar schedule, as they hit the ice with all 3 Philadelphia teams.

The EHL team opened up the showcase on Friday with a 4-2 win against the Wilkes-Barre/Scranton Knights. After the Knights went up 1-0, the Lumberjacks scored 4 unanswered goals in the 1st half and were able to hold on from there. Forward, Kyle McDonald, was all over the ice as he was responsible for 3 of those goals, recording a natural hat-trick in just under 10 minutes of action. Logan Discanio scored the other goal, which of course was also assisted by McDonald. McDonald’s four points from Friday’s game gives him a total of 14 points on the year. Chris Stangarone picked up the win in net stopping 30 of 32 shots which gets him to a record of 5-1-0 on the season with a 2.41 GAA.

Switching gears to Saturday morning, where the Lumberjacks faced the unbeaten Philadelphia Revolution for the first time this season. The Revolution came into this game having won 12 straight, but the Lumberjacks played them tough. After going down 2-0, Lumberjacks' forward Conor Leonard cut the deficit late in the hockey game. However, Revolution goalie Travis Pelke stood tall in net and handed the Lumberjacks their 4th loss of the season.

On Saturday, the EHLP boys went up against the 1st place team from the South Conference, the Philadelphia Jr. Flyers. They were a bit outmatched early on, as the Jr. Flyers scored the games first 4 goals. The boys lost by a final of 5-1, but they will get at least another chance against the Jr. Flyers on January 13th.

Shifting gears over to Sunday where the Lumberjacks took on another Philadelphia team in the Little Flyers. After the 1st half, the Lumberjacks were winning 3-1 with goals coming from Geordan Buffoline, Skylar Pettingill, and Zack Selinger. The boys didn't take their foot of the gas in the 2nd half, scoring 4 more goals and winning by a final of 7-2. Matt Amelio tallied 2 of the 2nd half goals, with the others coming from Dillion Mensing and Jason Vogel. In net, Connor Carbo stopped 22 of 24 shots in the win, bringing his season record up to a perfect 7-0-0.

On Monday, the EHLP squad faced a 3rd Philadelphia opponent in as many days in the Philadelphia Revolution. The shots were dead even at 25 a piece with these 2 equally matched opponents. The Lumberjacks scored the first 2 goals of the game, however, the Revolution would come back to get the next 2 tallies to tie the game. With just over four minutes left in the game, Sam Swingruber put home the game-winning goal away, as the Lumberjacks won by a final of 3-2.

Looking ahead at the EHL schedule, the Lumberjacks have a divisional matchup at home against the New England Wolves on Friday at 1:00pm. The team will then go on the road to play the East Coast Wizards in Bedford  at the same time on Tuesday.

The EHLP squad has a home game against the Wolves at 3:00pm this Friday, before going on the road the next weekend to play the Wolves again as well as the Boston Jr. Rangers. 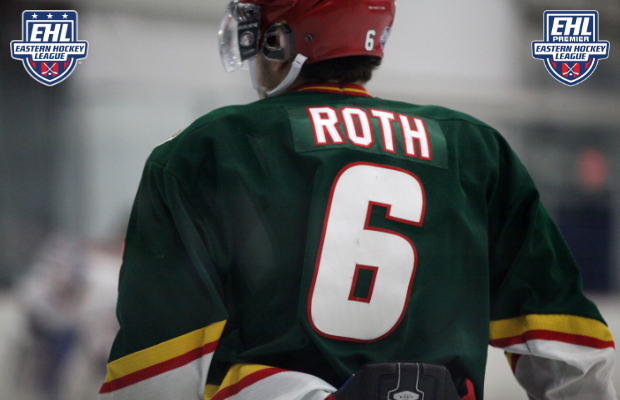