BURLINGTON, VT - Both the EHL and EHLP squads traveled up to Laconia for a pair of divisional matchups against the New England Wolves this past weekend. Going into the weekend, both teams were a combined 7-0-0 against the Wolves so far this season.

On Saturday, the Lumberjacks and the Wolves faced-off for the 4th time this season, with the Lumberjacks winning first 3 matchups by a combined score of 20-5. Saturday wasn't any different as the Lumberjacks jumped out to a 3-0 lead in the 1st period with goals coming from Conor Leonard, Andrew Bechard, and Taylor Papesh. The Wolves would get a goal back in the second period to make it 3-1 going into the final frame. Kyle McDonald picked up a pair of goals in the 3rd, leading the Lumberjacks to a 5-2 win. In net, Chris Stangarone made 30 saves in the victory, bringing his record up to an impressive 8-1-0 on the season.

Turning the page to Sunday, where the Lumberjacks and the Wolves went right back at it for a 2:15pm puck drop. The Wolves would get on the board first, but it was quickly answered by Bechard for the Lumberjacks, just a minute later. The boys went on to completely dominate the 2nd frame as they put up 5 total goals in the 20 minutes. Maxine Bourque put away the first goal on the power play halfway through the period, and the remaining tallies came from Papesh, McDonald, Patrick Manning, and Logan Discanio. With the 6-1 win, the Lumberjacks are now 5-0-0 against the Wolves this season.

On Saturday, the 1st place Lumberjacks battled the Wolves for the final two times in the regular season, having won all 4 of the previous matchups by a combined score of 20-4. Matt Amelio put the boys on the board first just under 3 minutes into the game. After a power-play goal by the Wolves, Skylar Pettingill answered with a short-handed goal at the end of the frame, which gave the Lumberjacks a 2-1 lead at the break. Jason Vogel and Mason Fay scored the only goals in the 2nd period, which gave the team a 4-1 lead going into the final frame. Pettingill would pick up his 2nd goal of the game just under 5 minutes into the 3rd, and the Lumberjacks won by a final score of 5-2. Eric Roy made 31 saves in the win, bringing his record up to 5-1-0 for the year.

Switching gears over to Sunday, and the final matchup of the regular season. The boys went up 2-0 in the first 5 minutes of the game with goals by Egan Schmitt and Geordan Buffoline. The Wolves would get one back at the end of the period to make it 2-1 at the break. In the 2nd, Buffoline put one home on the power-play, followed by a goal from Zack Seligner to put the boys up 4-1. Connor Cameron added another goal in the 3rd to pad the lead as the Lumberjacks won the game by a final of 5-3 and swept the season series with the Wolves.

It will be a busy week coming up for the Lumberjacks organization as the 2nd showcase of the season is up on the schedule for both teams. The EHL squad will host the 1st place New Hampshire Avalanche on Thursday at 1:00pm before heading down to Haverhill, MA, for the showcase on Sunday and Monday.

On Sunday, the squad will play the Connecticut Oilers for the final time this season, as they beat them in the opener in Burlington by the score of 2-1. The boys will turn around and play the New York Bobcats Royals on Monday afternoon at 1pm to wrap up the week. The Lumberjacks faced the Bobcats Royals once this season, winning that matchup 8-1.

The EHLP squad on the other hand is off until the Tewksbury showcase, where they will play the New York Applecore on Sunday at 1:05pm, and then the Philadelphia Revolution on Monday at 8:50am. 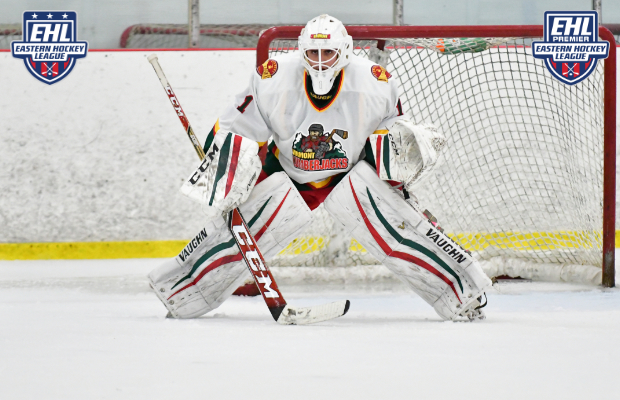