BURLINGTON, VT -- Both EHL and EHLP squads participated in showcases in Massachusetts this past weekend, with the EHL in Haverhill and the EHLP in Tewksbury. Coming out of each showcase, the EHL team still sits in 2nd place of the New England Division with a record of 12-6-0. The EHLP squad on the other hand, continues to lead the North Conference with 32 points.

The EHL squad started off their busy week by hosting the New England Division’s 1st place team on Thursday, the New Hampshire Avalanche. This was the second meeting between the two teams with the Lumberjacks losing the first matchup by the score of 5-2. On Thursday, the Lumberjacks put up 32 shots agaisnt the Avalanche, but could not find the back of the net as they fell to their division foe 2-0. The boys will get another crack at their rival on December 14th when they Hooksett, New Hampshire.

On Sunday, the Lumberjacks matched up with the Connecticut Oilers on Day #1 of the Haverhill Showcase. This was the 2nd and final time that the two teams would square off this regular season, with the Lumberjacks winning the first matchup 2-1 back on opening night. The Lumberjacks held the Oilers to just 13 shots the entire game, and won by a final of 1-0 to sweep the season series. Andrew Bechard scored the goal for the Lumberjacks and Chris Stangarone stood tall in net for the shutout.

To cap off a busy week, the Lumberjacks faced-off against the New York Bobcats Royals on Monday. This was the 2nd and final meeting between the two teams, with the Lumberjacks winning the first contest 8-1. Monday wasn't much different as Andrew Barber started off the scoring just under 6 minutes into the game to give the Lumberjacks the lead. The Bobcats Royals would knot up the game at 1-1 heading into the break. However, the 2nd half was all Vermont with 5 goals from 5 different goal scorers to lead the way in a 6-3 win. Patrick Manning, Connor Leonard, Logan Discanio, Jake Verreault, and Robby Feathers had the Lumberjacks goals. Matias Sakkinen made 22 saves between the pipes while picking up his first EHL victory.

The EHLP squad started off the Tewksbury showcase with a game against the New York Applecore for the final matchup between the two teams this season. The Lumberjacks won the first contest back in October by a socre of 5-1. On Sunday, Matt Amelio began making his case for EHLP Forward of the Week, by netting a hat-trick in the team's 6-1 dominating win. Tyler Murray collected a pair of goals as well, and Geordan Buffoline put home the other, to give him a team leading 32 points on the year. The Lumberjacks outshot the Applecore 47-13, and earned a season sweep against their South Conference opponent.

Turning the page to Monday, the boys faced-off with against the Philadelphia Revolution for the final time in the regular season. The Lumberjacks won the first matchup last month at the Brewster Showcase, by the score of 3-2. The Revolution got on the board first in this one, but it was quickly answered by Jason Vogel to tie the score heading into the intermission. The Revolution would take back the lead early in the second half, but it wouldn't last long. The flood gates opened up for the Lumberjacks after that, as they scored four unanswered goals starting with Amelio for his 4th tally of the showcase. Murray collected another pair of goals, giving him a total of four on the showcase as well. Noah Sanders added an empt- netter in the final minute of the game, to give the Lumberjacks a 5-2 win. Connor Carbo made 25 saves in the win, and both he and Amelio took EHLP honors earlier this morning.

Up next for the EHL squad is a pair of matchups against the Valley Jr. Warriors in Burlington this weekend. The two teams met in earlier in the year, with the Lumberjacks hanging on for a 3-2 victory.

The EHLP squad will also host the Valley Jr. Warriors this weekend, to kick-off a seven-game home stand. The Lumberjacks have beaten the Warriors in the two games that they have played by a combined score of 10-1. 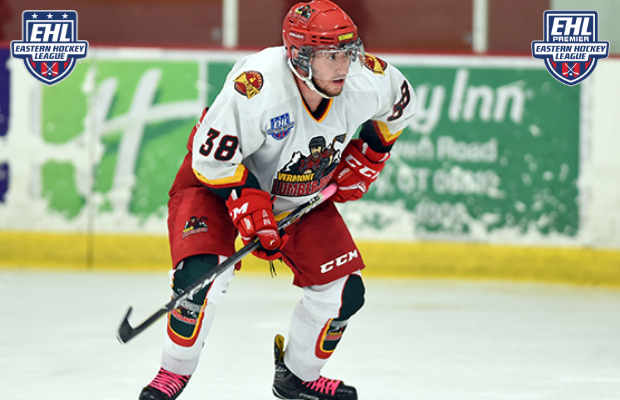