BURLINGTON, VT -- Both Lumberjacks teams were at home this past weekend, hosting the Valley Jr. Warriors on Saturday and Sunday. After a weekend sweep, the EHL squad currently sits in 2nd place of the New England Division with a record of 14-6-0. The EHLP squad on the other hand, remains in control of the North Conference and their sweep brings their record up to 18-2-0 for the season.

On Saturday, the boys faced-off with the Valley Jr. Warriors for the 2nd time this season, winning the first matchup last month by a score of 3-2. The Lumberjacks found themselves in a bit of trouble as they trailed 2-0 to the Warriors after two periods of play. However, the 3rd period belonged to Vermont, as they outshot the Warriors 19-8 and put up four goals in the process. Robby Feathers, Patrick Manning, Kurtis Olsen, and Kyle McDonald were the Lumberjacks goal scorers, as the boys would complete the comeback and win by a final of 4-3.

The very next day, the two teams went at it again in a puck drop at Noon. Feathers and Andrew Bechard put the Lumberjacks up 2-0 in the first frame and the boys didn't look back from there. Jake Verreault would add another goal in the 2nd to increase the lead to 3-0. The Warriors would get one back at the end of the period, but that’s all they would get as Alex Groner would add an insurance goal in the final period for his first tally of the season, giving the Lumberjacks a 4-1 victory. Stangarone would earn his second win of the weekend, which earned him a TSR Hockey Star of the Week Honor from the EHL. The netminder stopped 45 out of 49 shots he faced while improving his record up to a stellar 11-2-0 for the season.

The EHLP squad also was at home this weekend for a pair of games against the Warriors. The Lumberjacks won the previous two matchups against their division rival by a combined score of 10-1. Saturday wasn't much different as Connor Cameron got the scoring started in the 1st period, followed by goals from Tyler Murray and Steven Schmitt to give the Lumberjacks a 3-0 lead. The Warriors would get one back, but it was quickly answered just over a minute later by Skylar Pettingill to give the boys a 4-1 lead after two periods of play. Jacob Dillion would tack on a power-play goal in 3rd to give the Lumberjacks a 5-2 win. Eric Roy made 20 saves in the victory, improving his record to 7-1-0 for the season.

Shifting gears over to Sunday, Murray got the boys on the board first, just five minutes into the contest and it was all Vermont from that point on. Geordan Buffoline would add a pair of goals to his season totals as he now has 35 points on the year, which leads all of the Lumberjacks. The boys would add on three more goals in the 2nd frame by Schmitt, Aiden LaValley and Jacob Dillion to give the Lumberjacks a 6-0 lead. Last week’s EHLP Forward of the Week, Matt Ameilo, would tack on power-play goal in the final frame to give the Rangers a 7-1 victory. Connor Carbo stopped 19 shots in the victory, bringing his record up to 10-1-0 for the season.

With Thanksgivings on Thursday, both teams are off as the EHL team doesn't play again until November 29th when they will travel to Bedford, MA for a matchup against the East Coast Wizards. The Lumberjacks will then host the Boston Jr. Rangers for a pair of games that following weekend.

The EHLP squad is off until the first day of December where they will kick off an exciting three-game series with the Rangers in Burlington. 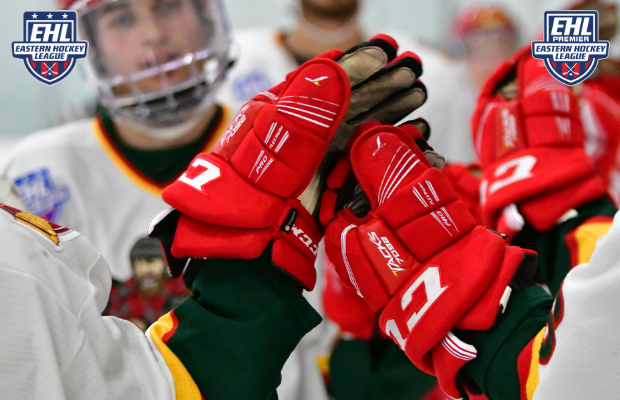