BURLINGTON, VT -- Both Lumberjacks teams played at home this past weekend, with three games apiece. In six hard fought games, the Lumberjacks unfortunately came up on the short side of them all. However, the EHL squad didn't move anywhere in the New England Division standings, as they are still sitting in 2nd place with a record of 14-10-0. The EHLP team dropped down into 2nd place in the North Conference for the first time since early September.

On Friday, the Lumberjacks hosted the Total Athletic Seahawks for the first matchup between the two teams this season. The Seahawks took a 1-0 lead into the third period and despite outshooting them 15-7 in that final frame, the Lumberjacks fell short by the final score of 2-1. Landon Michniak scored a power-play goal with 15 seconds remaining to diminish the shutout. The boys will get another crack at the Seahawks when they travel down to their building near the end of January.

Scoring continued to be an issue for the Lumberjacks the following day as the boys fell to the Boston Jr. Rangers by the score of 3-1. Kyle McDonald had the lone goal for the Lumberjacks. With the goal, the '98 forward now has 13 on the season and leads the Lumberjacks with 30 points. Chris Stangarone was busy in net as he stopped 35 shots in the loss.

On Sunday, the Rangers got to an early 2-0 lead, but Conor Leonard got one back for the Lumberjacks on the power-play near the end of the first frame. Both teams split the next period, each scoring two goals apiece, with both the Lumberjacks goals coming from Patrick Manning. However, the Rangers would go on to win the third period 4-2, and won the game by a final of 8-5. Michael Klintworth and Robby Feathers had the Lumberjacks' 3rd period goals. The two teams wont met again until Feburary 17th, when the Lumberjacks will travel down to Tewksbury for a pair of games at the Breakaway Ice Center.

On Friday, the Lumberjacks hosted the Boston Jr. Rangers to start a three-game weekend series. After getting behind 2-0 early, the boys battled back to tie the game up near the end of the first frame. Egan Schmitt and Matt Amelio had the two goals for the Lumberjacks. However, the Rangers would score the next five unanswered goals and won the game by a final of 7-3. Jacob Dillon added a goal for the Lumberjacks in the final seconds of the game.

The two teams went back at it the very next day and unfortunately for the Lumberjacks, the result wasn't much different. The Rangers scored the games first four goals and won by a final of 5-1. Nick Koszelak had the lone goal for the squad.

On Sunday, the Rangers got out to a 3-0 lead, but Alex Gowan and Matt Amelio cut the lead to 4-2 after two periods. The Lumberjacks would come back and tie the game at 4-4 with goals by Aidan LaValley and David Rosales, but it wasn't enough as the Rangers would score in the final few minutes and win the game 5-4. The boys will get another crack at the Rangers in a second three-game series with the team starting on February 16th.

The EHL squad will take a road trip down to Pennsylvania this upcoming weekend for a game with the Philadelphia Revolution this Saturday and a matchup with the Wilkes-Barre/Scranton Knights on Sunday.

The EHLP squad on the other hand will stay home and host the Central Penn Panthers for a pair of games this upcoming weekend. 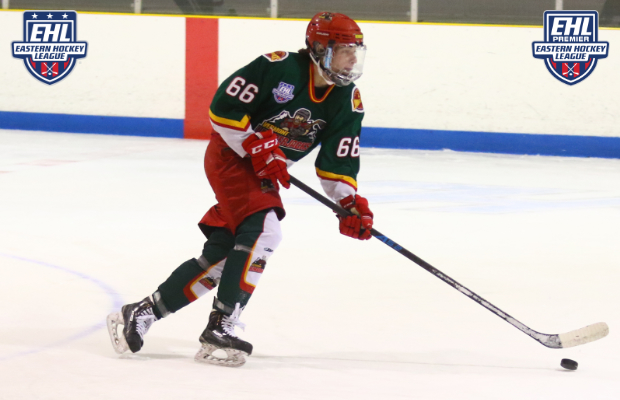