Buffoline and Schmitt Earn EHLP Stars of the Week Honors

BURLINGTON, VT -- Both Lumberjacks teams had a pair of games this past weekend, with the EHL squad losing two hard fought contests down in Pennsylvania and the EHLP squad taking care of business at home. However, the EHL team didn't move anywhere in the standings as they still currently sit in 2nd place in the New England Division with a record of 14-12-0. The EHLP squad also maintains their grip on 2nd place in their respective set of standings, as they moved to 20-5-0 for the season.

The EHL team traveled down to Pennsylvania this past weekend for a pair of matchups with a couple Mid-Atlantic Division opponents. On Saturday, the boys faced-off against the division’s 1st place team, the Philadelphia Revolution. The Lumberjacks lost by a score of 2-1 in the last matchup between the two teams at the October Showcase. The Revolution would score just over a minute into the game this time, and take a 1-0 lead into the 1st intermission. However, the Lumberjacks would come out and win the next frame, 2-1, thanks to a pair of goals from their leading scorer, Kyle McDonald. Unfortunately, the Revolution would score the final tally in the 3rd period and handed the Lumberjacks a 3-2 loss.

The very next day, the squad traveled to Wilkes-Barre/Scranton to finish off the season series with the Knights. The Lumberjacks beat the Knights 4-2, in their last matchup earlier in the year at the October Showcase. However, the Knights came out hot in the 1st period with two quick goals to take a 2-0 lead into the break. The Lumberjacks would comeback in the 2nd with 3 goals of their own by McDonald, Patrick Manning, and Logan Discanio. But the 3rd period did not go the Lumberjacks way as the Knights put up four goals in the frame, to win the game by a final score of 6-4. Andrew Bechard had the lone goal for the Lumberjacks in the 3rd.

The EHLP squad on the other hand stayed home this past weekend for a pair of matchups against the Central Penn Panthers. On Saturday, the boys got out to strong start with the games first three goals by Steven Schmitt, Skylar Pettingill, and Egan Schmitt. The Panthers would get two goals back at the end of the period to make it a 3-2 game at the break. Pettingill and Egan Schmitt, both scored their second goals of the game as the boys won the 2nd period 4-1. Matt Amelio and Alex Gowan had the other two goals in the frame for the Lumberjacks. The two Schmitt brothers finished off their hat-tricks in the 3rd period in route to a 11-5 Lumberjacks victory. Geordan Buffoline tallied a goal in the final frame along with five assists in the victory.

On Sunday, the boys picked up right where they left off the day before, jumping out to a 3-0 lead just under five minutes into the 1st period. Dillion Mensing, Alex Gowan, and Jason Vogel had the early tallies. Egan Schmitt would continue his strong weekend with another goal at the halfway mark. The Panthers would get one back at the end of the period to make it a 4-1 game going into the final frame. The Lumberjacks went on add four more goals in the 3rd period as both Gowan and Mensing picked up their 2nd goals of the contest. Buffoline and Pettingill would score the other two goals in the period, as the squad cruised to an 8-2 victory. Eric Roy made 13 saves in the win to improve his record to 8-2-0 for the season.

In the last week before the teams return back home for the holiday break, the EHL squad will look to end their losing streak when they travel to Hooksett on Thursday for a matchup with the New Hampshire Avalanche. The boys will then face-off  against both the Philadelphia Little Flyers and Philadelphia Jr. Flyers at December Showcase that starts on Sunday. The EHLP squad on the other hand will start a home-and-home series with the Walpole Express on Sunday. 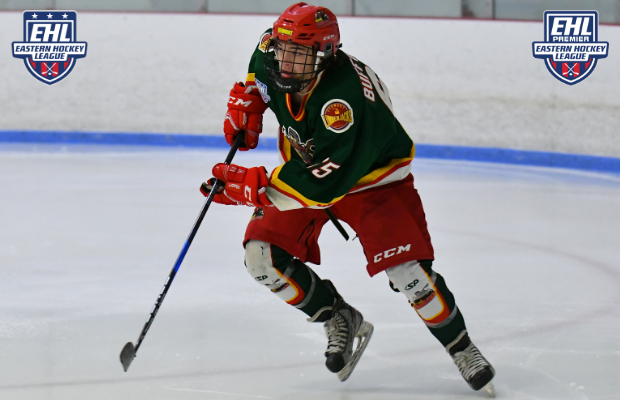