A Look Back at the Season to Date

BURLINGTON, VT -- Through the first 27 games, the squad is sitting in 2nd place in the North Conference with a record of 22-5-0 and are just 2 points back of the 1st place Boston Jr. Rangers. The EHLP team is currently on a 4-game winning streak and holds an impressive 12-1-0 record over South Conference opponents so far this season. The Lumberjacks have scored 136 total goals so far this season, which equals out to a 5.03 goals per game average. The team has scored more 2nd period goals than any other team in the EHLP this season, with 56 total to date. On the flip side, the squad has only allowed 73 goals as Connor Carbo and Eric Roy have both helped the Lumberjacks to a 2.70 goals against per game average. The Lumberjacks have also scored 21 goals on the power-play so far this year.

Geordan Buffoline leads the team in scoring with 30 goals and 18 assists (48 points). With those 30 goals, the forward leads the entire EHLP in that category. Matt Amelio isn't too far behind as he has tallied 39 points of his own this season. Skylar Pettingill has also been a force on offense with 15 goals on the year. On the blue line, Zack Watkins, leads all defensemen on the team in points with 22. Last, but not least, Connor Carbo leads the entire EHLP in wins with 11, while maintaining a solid 2.63 GAA and a .910 save percentage.

The league is headed into the winter intermission for the next couple weeks as the Lumberjacks won’t resume play until January 6th and 7th when they host the Walpole Express for a pair of games. 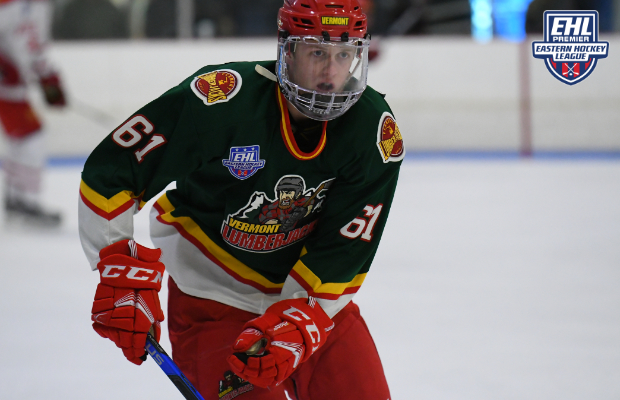