EHL and EHLP Teams Gear Up For Home Weekend

BURLINGTON, VT -- Both Lumberjacks squads are returning from the holiday intermission and will get back to work this upcoming weekend. Through the first 29 games, the EHL team is sitting in 2nd place in the New England Division with a record of 14-13-2. Out of the 21 remaining games, 6 will come against divisional opponents. Also, 11 of the remaining Lumberjacks matchups will come against Boston Divisional opponents, where the squad is winless in 5 games against the 4 teams. There is 1 remaining showcase left to be played this season as the boys will travel down to West Chester, PA, on January 19th and 20th to matchup against the New York Applecore and the Connecticut Roughriders. The Lumberjacks hold a 3-1-2 record in showcase play so far this season.

The EHLP squad is sitting in 2nd place in the North Conference with a record of 22-5-0, with 17 games remaining on the schedule. The Lumberjacks find themselves just 2 points behind the 1st place Boston Jr. Rangers with 3 games remaining against their divisional rival. The squad will travel down to Tewksbury for a 3-game series with the Rangers starting on February 16th, which may likely the #1 seed in the playoffs. The Lumberjacks hold a 4-1-0 record in showcase play so far this season and will travel to Revolution Ice Gardens for the final EHLP Showcase of the season starting on January 19th where they will matchup against the New Jersey Renegades and the Walpole Express.

The EHL team will look to end their losing skid this weekend as the squad is set to host the Express for a pair of games. The game on Saturday is scheduled for an 8:30pm puck drop, followed by a Noon game start the very next day. Both of the games this weekend will mark the first meetings between the 2 teams this season as the Express sit in 2nd place in the Boston Division with 45 total points.

The EHLP squad will put their 4-game winning streak on the line this weekend as they are also hosting the Express for a pair of games. On Saturday, the puck drop is scheduled for 5:30pm and then the two teams will get back at it at 9:00am the very next morning. The Lumberjacks have already beaten the Express twice this season, with Skylar Pettingill scoring 6 goals in the previous matchup. 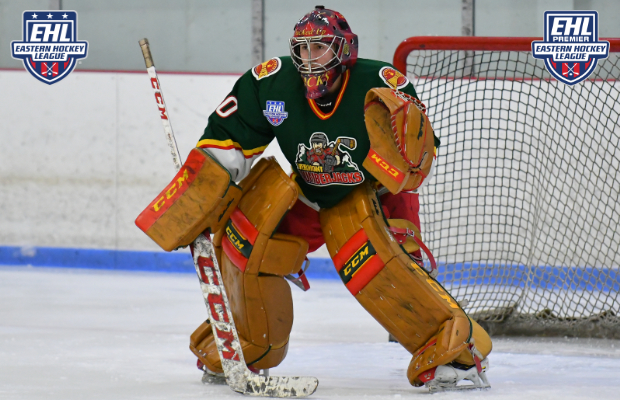