Carbo Earns EHLP Honors, Plus a Big Weekend in Philly

BURLINGTON, VT -- Both Lumberjacks teams had a pair of games this past weekend against the Walpole Express, with the EHL squad losing 2 hard fought battles and the EHLP team taking care of business in both of their matchups. However, the EHL team didn't move anywhere in the standings as they still currently sit in 2nd place in the New England Division with a record of 14-15-2. The EHLP squad jumped into 1st place in the North Conference with the 2 wins this past weekend, improving their overall record up to 24-5-0 for the year.

After the Express scored the game's first goal on Saturday, Logan Discanio tied up the score with a tally just passed the 8-minute mark of the first period. However, the Express would respond with a goal of their own just 8 seconds later and the Lumberjacks were not able to comeback as they fell by a score of 4-1. Chris Stangarone was busy in net for the Lumberjacks, stopping 35 shots in the losing effort.

On Sunday, the Express would take the lead just 12 seconds into the game, but Robby Feathers would get a goal back for the Lumberjacks at the end of the 1st period. The Express would go on to win the next period 3-1 with the Lumberjacks goal coming from their leading scorer, Kyle McDonald. The boys would make the game interesting in the 3rd period, with 2 quick goals from Andrew Bechard and Patrick Manning to knot up the score once again. However, the Express would score the next 2 goals and go on to win the game 6-4.

The Lumberjacks put their 4-game winning streak on the line this past weekend with a pair of matchups against the Walpole Express. On Saturday, the boys picked up right where they left off and grabbed a quick 3-0 lead after the 1st frame with goals coming from Geordan Buffoline, Jason Vogel, and Connor Cameron. The Express would get a goal back in the 2nd frame, but it was answered by Jacob Dillion in the winding minutes of the period to give the Lumberjacks a 4-1 lead. Despite a late charge from the Express, the boys held their ground and finished off a 4-3 win. Eric Roy made 28 saves in the winning effort.

Switching gears over to Sunday, Buffoline got the Lumberjacks on the board first again, but the Express would fight back to tie up the game with just 21 seconds remaining in the 1st period. Skylar Pettingill would put the Lumberjacks ahead with a short-handed goal just under 12 minutes into the 2nd frame. Buffoline and Pettingill would then each add another goal apiece to lead the Lumberjacks to a 4-1 victory. Connor Carbo made 32 saves in the win, which earned him league honors as the TSR Goalie of the Week.

The EHL squad will look to end their losing skid on Wednesday when they are set to travel to Haverhill for a divisional matchup with the Valley Jr. Warriors. The boys will then head to Pennsylvania this upcoming weekend for matchups with both the Philadelphia Jr. Flyers and the Philadelphia Little Flyers.

The schedule is exactly the same for the EHLP team, as they get set for a big 3-game week 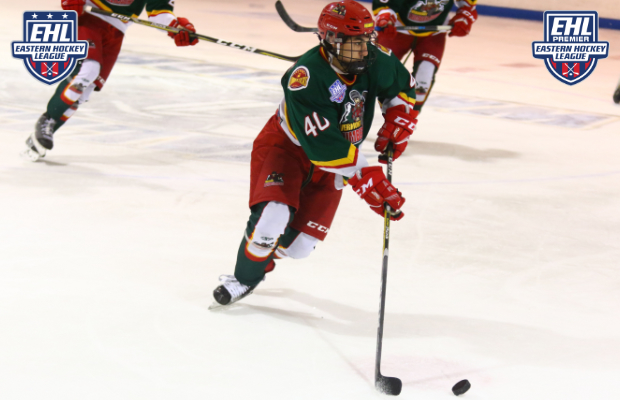