EHL and EHLP Teams Geared Up For Big Weekend

BURLINGTON, VT -- Both Lumberjacks teams had a busy week this past week, with 7 games combined between the 2 teams. The EHL squad lost a few hard fought battles on the road, but was able to end their losing skid. The EHLP on the other hand went 2-1-0 on the road this past week. Despite the losses, both Lumberjacks teams didn't move anywhere in their respective standings, with the EHL team still sitting in 2nd place in the New England Division with 32 points. The EHLP squad still finds themselves at the top of the North Conference with a record of 26-6-0.

On Wednesday, the Lumberjacks traveled to the Haverhill Valley Forum to face-off against the Valley Jr. Warriors. This matchup marked the fourth time that the 2 division rivals have squared-off this season, with the Lumberjacks winning the previous 3 games. However, the Warriors got the games first 2 goals and took an early lead on the Lumberjacks. Max Roth was able to cut the lead in half at the end of the 2nd period, but the Warriors would answer back with 2 more goals for themselves and won the game by a final of 4-1.

The squad then traveled down to Philadelphia for a pair of matchups against 2 Mid-Atlantic Division opponents. On Sunday, the Lumberjacks matched up against the Philadelphia Little Flyers. The Little Flyers scored a goal in both the 1st and 2nd periods to take a 2-0 lead into the final frame. Kyle McDonald cut the lead in half with a power-play goal just 55 seconds into the period. However, the Little Flyers would add an insurance tally and win the game by a final score of 3-1.

The boys returned to action the very next day with a matchup against the Philadelphia Jr. Flyers. The boys lost to the Jr. Flyers last month at the EHL’s December showcase, but Monday’s game was a different story. Both Andrew Bechard and Kyle McDonald gave the Lumberjacks an early 2-0 lead in the 1st period. The Jr. Flyers would answer with a goal of their own near the halfway point of the 2nd frame. However, Bechard would net his second goal of the game just 20 seconds later to add to the Lumberjacks lead. Andrew Barber would score a last second power-play goal at the end of the period to give the boys a 4-1 lead heading into the final 20 minutes. The Lumberjacks would add 2 more goals in that final frame by Landon Michniak and Taylor Papesh, and ended their losing streak with a 6-1 victory.

The squad then traveled back up to Hooksett, NH, for a matchup on Tuesday against the 1st place New Hampshire Avalanche. The Avalanche would win the first period by a score of 2-1, with the Lumberjacks goal coming from McDonald. The second frame belonged to the Avalanche as well as they scored 4 separate times to take a 6-2 lead. Maine native, Jake Verreault scored the loan goal for the Lumberjacks in the period. McDonald would tack on his second goal of the game in the final frame but the Lumberjacks would fall to their division rival by a final of 6-3. With the 2 goals, McDonald now has 22 on the season and a team-leading 47 points.

On Wednesday, the EHLP squad traveled to the Haverhill Valley Forum for a matchup against the Valley Jr. Warriors. This matchup marked the 5th time that the 2 division rivals have played against each other this season with the Lumberjacks winning the previous 4 games by a combined score of 20-4. After a scoreless 1st period, Tom Skold broke the tie with a power-play goal for the Lumberjacks that was assisted by goaltender Connor Carbo. The Warriors would answer and tie the game up later in the frame, but both David Rosales and Skylar Pettingill would score for the Lumberjacks at the end of the 2nd period to put the game out of reach. Connor Carbo would hold off the Warriors in the final frame to preserve a 3-1 win. The goaltender made 27 out of a possible 28 saves in the winning effort.

The EHLP squad traveled down to Philadelphia with the EHL squad this past weekend for a pair of games against 2 South Conference opponents. The boys faced-off against the Philadelphia Little Flyers on Sunday morning. Despite outshooting them 27-20, the squad couldn't beat their goaltender and lost by final of 3-0.

Both Lumberjacks squads will turn their attention now to the upcoming showcases in Pennsylvania as this is the final stop for the #EHLShowcaseSeries this season. The EHL squad will start showcase play on Friday at the Ice Line Quad Rinks with a matchup against the New York Applecore at 4:00pm over on rink #3. The Lumberjacks will return to action the very next day with a rematch against the Connecticut RoughRiders at 12:15pm on rink #4.

The EHLP on the other hand, will be playing their showcase games at the Revolution Ice Gardens where they will matchup against the New Jersey Renegades on Friday at 5:00pm. The squad will return to action the next day when they are scheduled to face-off against the Walpole Express at 9:00am. 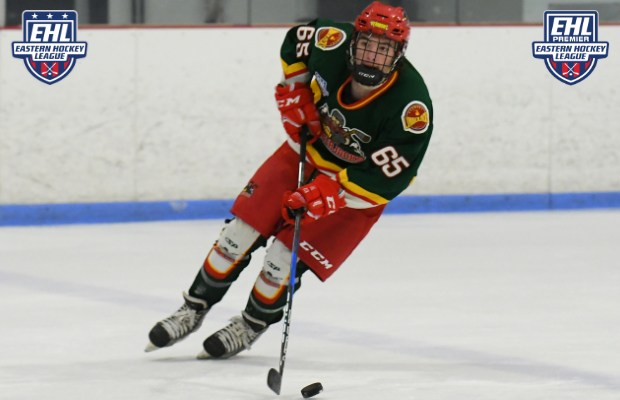