BURLINGTON, VT -- It was a busy week for the Lumberjacks organization as both the EHL team and the EHLP team each participated in separate showcases down in Pennsylvania.

The EHL team went 1-1-0 in their showcase at the Ice Line Quad Rinks in West Chester. The squad is currently sitting in 2nd place in the New England Division with a record of 16-19-2.

The EHL squad also traveled down to the Revolution Ice Gardens this past weekend and lost their only game in a shootout. Despite the loss, the Lumberjacks still hold the lead in the North Conference with 53 points.

On Friday, the EHL squad faced-off against the New York Applecore for the final time this season. The Lumberjacks won the first matchup between the 2 teams by the score of 4-3 at home, in the beginning of the season. Conor Leonard got the boys on the board first with a goal just over 8 minutes into the opening period. The scored remained 1-0 until the 2nd half where the Applecore scored 2 unanswered goals to take a 2-1 lead. The Applecore maintained the lead until Leonard scored his second goal of the game with just 13 seconds remaining to send the game into overtime. The momentum was clearly on the Lumberjacks side in the overtime period as it took only 46 seconds for Kyle McDonald to find the back of the net to give the Lumberjacks a 3-2 victory. Chris Stangarone was solid in between the pipes, stopping 33 saves in the winning effort.

The squad returned to the rink the very next day for a matchup against the Central Division’s 1st place team, the Connecticut RoughRiders. The RoughRiders took the early 1-0 lead with a goal in the first 2 minutes of the game, but Andrew Bechard scored his 18th goal of the season shortly there after to knot up the score at 1 apiece. However, the RoughRiders would respond with a goal of their own just under a minute later to take a 2-1 at the break. Unfortunately, the RoughRiders hung 3 goals on the Lumberjacks in the 2nd half and won the game by a final score of 5-1.

The EHLP squad on the other hand played just 1 game at the showcase against the New Jersey Renegades on Friday. Despite outshooting the Renegades in the first half, the boys got down to an early 3-0 deficit at the break. However, the Lumberjacks came out flying in the second frame as Jason Vogel got the squad on the board just 37 seconds into the half. Alex Gowan found the back of the net a few minutes later to cut the lead down to 3-2. The Renegades would respond shortly after to give themselves a 2-goal advantage once again. However, the Lumberjacks continued to battle back as Matt Amelio scored just past the 16-minute mark to cut the lead back down to 1. The Lumberjacks leading scorer, Geordan Buffoline, beat the Renegades goaltender with just 25 seconds remaining in the game to tie things up at 4 goals apiece. After a scoreless overtime period, the Renegades earned the extra point in a shootout win. Connor Carbo was busy in net stopping 48 out of 52 total shots in the losing effort.

On Saturday the EHLP was scheduled to face-off with the Walpole Express at 9:00am, but due to some bus issues for the North Conference rival, the game was cancelled and will be made up at a later date. The details for the make-up game will be released soon.

The EHL squad will return to action this upcoming weekend with a trio of games on the road, starting with the Total Athletics Seahawks on Friday. The boys will then travel up to play both the New Hampshire Avalanche and the New England Wolves on Saturday and Sunday.

The EHLP team is off until February 7th when they will start their own 8-game road trip with a matchup against the New England Wolves in Laconia. 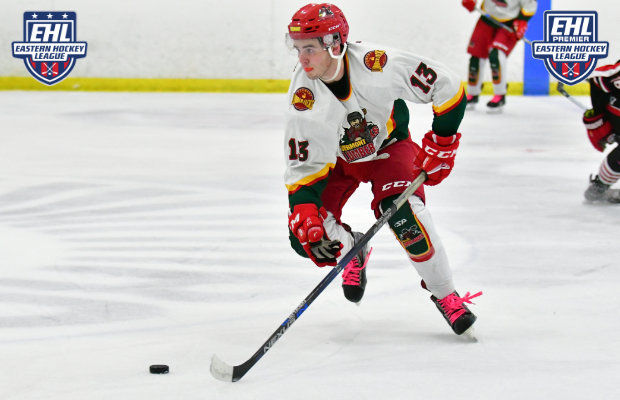