BURLINGTON, VT -- It was a quiet week for the Lumberjacks organization as the EHL squad dropped their only game of the week to the Wizards on Monday. Despite the loss the Lumberjacks didn't move anywhere in the standings as they still sit in 3rd place in the New England Division and 5th place overall in the North Conference with a record of 19-20-2. The EHLP team on the other hand was off this past weekend and won't play again until  tomorrow afternoon.

On Monday, the squad hosted the East Coast Wizards in a potential playoff preview matchup. The Wizards put up four goals in the 1st period to take a 4-0 lead into the break. After another Wizards goal, Alex Groner responded for the Lumberjacks just a minute later. Both Conor Leonard and Landon Michniak scored two goals just 34 seconds apart to cut the deficit to a 5-3 game with 12 minutes left to play in the 2nd frame. However, the Wizards would add a couple more goals including an empty-netter to win the game by a final score of 7-3. Tripp Hutchinson made 20 saves in goal after coming in for relief after the 1st period. The Lumberjacks will finish off the season series with the Valley Jr. Warriors on the road with a pair of games this upcoming weekend.

The EHLP squad will return to action this week with a busy slate of games on the road, starting with a matchup on Thursday against the New England Wolves. The Lumberjacks have beaten the Wolves the past six times this season by a combined score of 30-9 and will look for the season sweep tomorrow afternoon. The squad will then link up with the EHL team in Haverhill for a pair of matchups against the Valley Jr. Warriors on Saturday and Sunday. 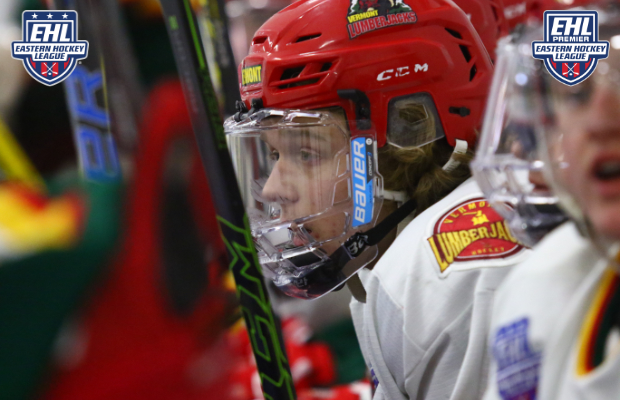