BURLINGTON, VT -- Both Lumberjacks squads got back on track this past week, starting with the EHL squad winning both their games against the Valley Jr. Warriors. The EHLP squad on the other hand went 2-1-0 in their three games this past week, picking up a pair of wins themselves over the Warriors. With the wins, the EHL team still sits in 2nd place in the New England Division and 5th place overall in the North Conference with a record of 21-20-2. The EHLP team finds itself in 2nd place in the North Conference with 57 points.

On Saturday, the EHL squad traveled to the Haverhill Valley Forum to start a two-game series against the Valley Jr. Warriors. Andrew Barber put the Lumberjacks ahead with a goal near the end of the 1st period to make it a 1-0 game. Wade Weeden gave the boys a two-goal lead, converting on an opportunity just under three minutes into the 2nd frame. The Warriors cut the lead in half near the 17-minute mark of the third period. However, Andrew Bechard would then capitalize on the power-play just under four minutes later to make it a 4-2 game. But, the Warriors would respond again to put it back to a one-goal lead. With under three minutes to play, David Rosales found the back of the net to give the Lumberjacks some insurance. The recently committed Patrick Manning (Anna Maria College) scored a minute later to put the game out of reach at 5-2. Both Noah Sanders and Kyle McDonald collected a pair of assists in the win. Chris Stangarone was solid in net for the squad, stopping 26 shots for his 16th win of the season.

The boys returned to the rink on Sunday afternoon for game #2 against the Warriors. Robby Feathers scored a pair 1st period goals to put the Lumberjacks up 2-0 after 20 minutes of play. The Warriors responded with a power-play goal just over three minutes into the 2nd period to cut the deficit in half. Around three minutes later, Bechard scored his 21st goal of the season to give the boys a 3-1 lead. Manning added another goal for the Lumberjacks around the six-minute mark of the frame, but the Warriors quickly answered before the end of the period to make it a 4-2 game at the break. Glynn Robitaille gave the Lumberjacks a 5-2 lead just under three minutes into the final period with McDonald and Landon Michniak recording assists on the goal. Despite a late Warriors tally, the Lumberjacks would go on to win the game by a final of 5-3. Peter Siolas stopped 24 out of a possible 27 shots for his first win as a member of the Lumberjacks.

The EHLP squad started a three-game road trip in Laconia on Thursday to wrap-up their season series with the New England Wolves. The Lumberjacks fell to an early 2-0 deficit after the 1st period. However, the boys came out strong in the 2nd frame, outshooting the Wolves 14-8 and capitalizing on the first power-play opportunity of the period, scored by Jason Vogel around the 12-minute mark of the frame. The Lumberjacks leading scorer, Geordan Buffoline, tied the game at two apiece with a goal in the final two minutes of the period, with Jacob Dillion recording an assist on the tally. The Lumberjacks weren't able to hold off the Wolves in the 3rd period thought, as they scored two goals plus an empty-netter to win the game by a final of 5-2.

Shifting gears to Saturday, the boys linked up with the EHL squad in Haverhill to complete their season series with the Valley Jr. Warriors. Dillion Mensing got the scoring started for the Lumberjacks, just 48 seconds into the 1st period. Zack Selinger gave the Lumberjacks a 2-0 lead around the 10-minute mark of the frame with the assist coming from Buffoline. The '99 forward found himself on the score sheet yet again as Buffoline converted on the power-play near the seven-minute mark of the 2nd period. Matt Amelio gave the Lumberjacks a 4-0 advantage near the end of the frame for his second point of the game. The Warriors would get a goal back in the 3rd period to make it a 4-1 lead, but Mensing converted on the power-play to give the Lumberjacks a convincing 5-1 lead. The Schmitt brothers (Egan and Steven) both recored assists on the goal. Connor Carbo held the Warriors off the rest of the game making 17 total saves in the 5-1 victory.

The boys retuned to action the next afternoon and got off to a quick 2-0 lead after the 1st period with two unassisted goals from Dillion and Amelio. Vogal continued the scoring in the first two minutes of the second frame with a goal to make it 3-0. Amelio added another goal just over two minutes later to give the Lumberjacks a four-goal advantage. The Warriors would strike back with a goal of their own, but Dillion would respond for the Lumberjacks in the final minute of the period to give the squad a 5-1 lead at the break. The boys blew the game wide open in the 3rd period with five goals coming from Mensing (2), Buffoline, E. Schmitt, and Alex Gowen. Eric Roy made 36 saves in the 10-1 win.

The EHL squad has a busy week ahead of them with a slate of three road games starting with a matchup against the Total Athletics Seahawks on Wednesday. The boys will then travel to Tewksbury for a pair of games on Saturday and Sunday to complete their season series with the Boston Jr. Rangers.

The EHLP squad also has a busy week starting with a home game against the Walpole Express on Wednesday. The boys will then head to Tewksbury as well, for an important three-game series with the 1st place Rangers. 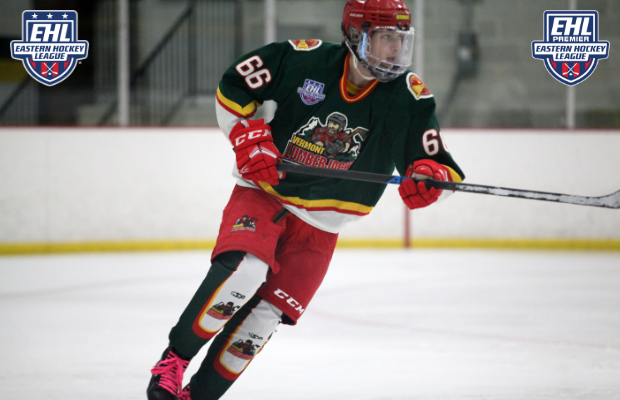