BURLINGTON, VT -- It was a busy week for the Lumberjacks organization as each team had three games on the road. The EHL team won their first game of the week against the Total Athletics Seahawks last Wednesday, then dropped their next two games against the Boston Jr. Rangers. The EHLP on the other hand went 1-1-1 on the weekend with three games all against the Rangers. As we turn to a new week, the EHL squad is sitting in 5th place in the North Conference with 46 points and has clinched a matchup with the East Coast Wizards in the First Round of the EHL Playoffs. The EHLP squad on the other hand is sitting in 2nd place in the North Conference with a record of 30-8-2, and will matchup with the Walpole Express in the First Round of the EHLP Playoffs.

The Lumberjacks also hosted a JFK open skate field trip featuring students from the local elementary school. Players on the Lumberjacks teams go into JFK Elementary once a week and read to the students.

"I think it is great that our players volunteer time with JFK Elementary every week," said EHL head coach and general manager Jim Mosso. "They go every Thrusday and help with reading and writing. Learning how to give back and help build a community instills long term values in both our players as well as the young kids. I couldn't be more proud."

Last Wednesday, the Lumberjacks traveled to Hyannis for the final time this season for a matchup against the Seahawks. The Seahawks grabbed the lead first with a goal just under three minutes into the game. However, Logan Discanio answered for the Lumberjacks at the 11-minute mark of the period to knot up the score at one goal apiece. Glynn Robitaille found the back of the net a few minutes later to give the boys a 2-1 advantage at the break. The Seahawks tied the game up just over a minute into the 2nd frame, but Andrew Barber answered back again for the Lumberjacks to give the squad a 3-2 lead near the halfway point of the contest. The boys held off the Seahawks offense for the rest of the game and Robitaille added another goal for the Lumberjacks to give them a 4-2 victory. Matias Sakkinen stopped 38 out of 40 shots in the win.

The squad then linked up with the EHLP team in Tewksbury on Saturday for a 2:50pm game against the Rangers. The Rangers got an early two-goal lead to start the game, but Discanio cut the lead in half near the end of the frame. However, the Rangers added another goal in the final seconds of the period to take a 3-1 lead at the break. Both teams went back and forth with a pair of goals in the next frame, as Landon Michniak and Conor Leonard recorded the goals for the Lumberjacks to make it a 5-3 deficit heading into the 3rd. The Rangers would go on to win the 3rd period and won the game by a final of 7-4. Robitaille converted on the power play in the 3rd period for his 9th goal of the season. Chris Stangarone stopped 31 shots in the losing effort.

The boys returned to the rink the very next morning for a final matchup with the Rangers. The Rangers jumped out to a quick three-goal lead in the 1st period and never looked back on their way to a 7-1 victory. Max Roth, who recently committed to Worcester State University, scored the lone goal for the Lumberjacks.

The EHLP squad traveled down to Breakaway Ice Center for an important three-game series against the Rangers this past weekend. On Friday, the team's leading scorer, Geordan Buffoline, put the Lumberjacks up 1-0 on the power-play just under four minutes into the game. The Rangers tied up the game at one apiece with a goal in the winding minutes of the 2nd period. Connor Carbo was solid between the pipes for the Lumberjacks, stopping 38 shots and helped force the game into overtime. After a scoreless extra frame, the Rangers went on to win after eight rounds in the shootout.

The squad returned to the rink the next afternoon for the middle match of the series. The Rangers scored the first first five goals of the game as the Lumberjacks were never able to get anything going and lost the game by a score of 8-2. Both Egan Schmitt and Tom Skold had the goals for the Lumberjacks.

The boys got back at it again the next morning for the final game of the series. After a scoreless 1st period, Skylar Pettingill got the Lumberjacks on the board first with a power-play goal just under 16 minutes into the second frame. Alex Gowan gave Vermont a two-goal advantage with a tally in the first few minutes of the final period. Connor Cameron then gave the squad some insurance around the halfway point of the frame to put the Lumberjacks up 3-0. Eric Roy bounced back with a stellar game on Sunday, shutting out the Rangers and stopping all 42 shots in the process.

The EHL squad has just 4 regular season games remaining this season, starting with a pair of games this upcoming weekend on the road against the Walpole Express. The EHLP squad will travel with the EHL team, and face-off against the Express for a pair of games as well. 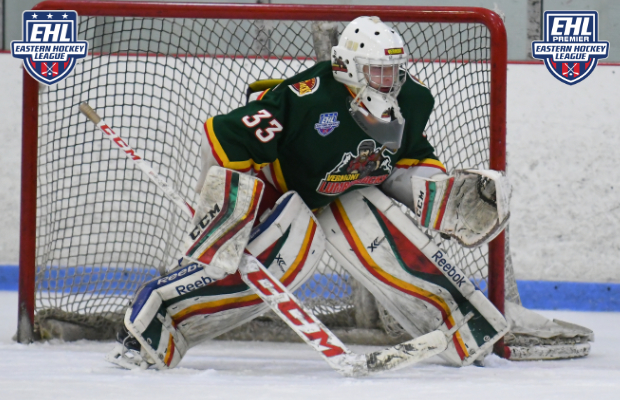