EHL and EHLP Teams Gear Up for Postseason

BURLINGTON, VT -- One busy week led into another as both Lumberjacks squads traveled down to Walpole for a pair of games. The EHL team lost both of their matchups to the Express, while the EHLP squad went 1-1-0 over the weekend. As we turn to a new week, the EHL squad is sitting in 5th place in the North Conference with 46 points and has clinched a matchup with the East Coast Wizards in the First Round of the EHL Playoffs. The EHLP squad on the other hand is sitting in 2nd place in the North Conference with a record of 31-9-2, and will matchup with this same Express team in the First Round of the EHLP Playoffs.

On Saturday, Logan Discanio gave the Lumberjacks the lead with a power-play goal, assisted by both Patrick Manning and Max Roth, near the last minute of the 1st frame. However, the Express would tie the game halfway through the 2nd period, and got the go-ahead goal on the power-play in the final frame. Despite outshooting the Express 35-23 in the game, the Lumberjacks fell by a score of 2-1. Chris Stangarone, who has recently committed to UMass Dartmouth, stopped 21 shots in the losing effort.

The squad returned to the same rink the very next day for another matchup with the Express. The Lumberjacks got to an early 2-0 deficit and couldn’t find the back of the net for the remainder of the game and lost by a 5-0 final. Matias Sakkinen had a busy afternoon between the pipes, making 32 saves in the loss.

The EHLP squad faced-off with Express right after the EHL game ended on Saturday. After giving up an early power-play goal, Matt Amelio knotted up the score at 1-1, with a goal less than a minute later. However, the Express would respond with the next two tallies of the period to take a 3-1 lead into the break. The Lumberjacks weren’t able to find the back of the net for the rest of the game and lost by a 7-1 final.

The boys got back at it the next morning, and after giving up the first goal of the game, Alex Gowan responded for the Lumberjacks followed by another goal from Tom Skold, to give the squad a 2-1 lead at the break. The Lumberjacks leading scorer, Geodan Buffoline, got his name on the scoresheet yet again, assisting the two 1st period goals. The Express responded with a pair of goals of their own in the 2nd frame to take a 3-2 lead. Nick Koszelak then tied up the game near the five-minute mark of the period with an unassisted tally, followed by a goal from Amelio just over a minute later to give the lead back to the Lumberjacks. However, the Express would score the only goal of the 3rd frame to send the game into overtime. Egan Schmitt then pocketed his 12th goal of the season around three minutes into the overtime period to secure the victory for the Lumberjacks. Eric Roy stopped 28 shots for his 15th win of the season.

The EHL squad has just 2 games remaining this season, both at home, starting with a playoff preview matchup against the East Coast Wizards on Wednesday. The Lumberjacks will conclude their regular season with a final game against the Total Athletics Seahawks this upcoming Sunday.

The EHLP team also has just two games left to play, as they are set to host the Jersey Wildcats for a pair of games this upcoming weekend to wrap-up the regular season. 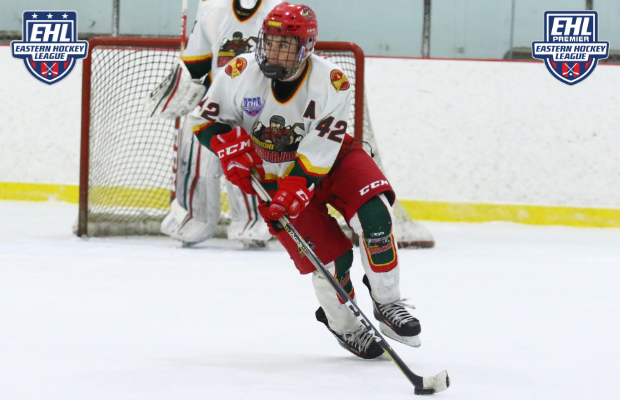