BURLINGTON, VT -- Both Lumberjacks teams are officially back in action after a long summer, as the EHL team split their opening weekend with the Valley Jr. Warriors. The EHLP squad on the other hand, won all 3 of their games this past weekend against the Warriors.

On Saturday, the Lumberjacks welcomed the Valley Jr. Warriors to town, to officially kick-off their 2018-19 season. James Boisvert converted on the power-play for the squad’s first goal of the campaign, just over 6 minutes into the game. Just under a minute later, Colin Philippon gave the Lumberjacks a two-goal lead. The Warriors would respond however, as they cashed in just a few minutes later with a goal of their own. That response was met with a better response from the Lumberjacks, as Cory Doney quickly answered to give the Lumberjacks a 3-1 lead. Both teams then traded goals inside the 4-minute mark of the frame as the boys went into the 1st intermission with a 4-2 advantage.

However, the second period belonged to the Warriors as they scored 3 separate times to take a 5-4 lead into the final frame. Logan Discanio tied up the game with a short-handed goal around the 13-minute mark of the 3rd period, but the Warriors had an answer in the following minutes to take a 6-5 lead. Andrew Bechard got into the action with a goal to tie up the game in the final couple minutes of the contest, but once again, the Warriors would respond, as they went on to win this wild contest by the final score of 7-6.

The Lumberjacks looked for redemption the very next day against the Warriors and got off to a hot start. Geordan Buffoline and Mason Emoff scored 1st period goals to give the Lumberjacks a 2-goal advantage heading into the 1st intermission. The Warriors would cut the lead in half at the 17-minute mark of the 2nd frame, but that tally was quickly answered by the Lumberjacks just 13 seconds later with a goal from Glynn Robitaille. After another Warriors goal, Wade Weeden gave the Lumberjacks some more insurance as the Lumberjacks took a 2-goal lead into the final frame. Bechard added a short-handed tally in the 3rd to help lead the Lumberjacks to their first win of the season. Connor Carbo stood tall between the pipes stopping 29 shots in the victory.

After dropping their home/season opener back on September 15th, the EHLP squad returned to action this past weekend with a 3-game series at home against the Valley Jr. Warriors. On Friday, the boys jumped out to an early lead with 4 goals in the 1st period scored by Logan Aprea, Raymond Miller, Tyler Nash, and Frank Mondi. The Warriors responded with a goal in the final minute of the frame, as the Lumberjacks headed into the first intermission with a 4-1 advantage. Nick Speckhart converted on the power-play just over 3 minutes into the 2nd period, followed by another goal from Nash just a minute later to give the Lumberjacks a commanding 6-1 lead. Raymond Miller, Zachary Miller, and Aaron Damren added some insurance goals as the Lumberjacks took game one by a final of 9-3. Alex Herman stopped 25 shots in the winning effort.

The squad returned to the Leddy Arena the very next day for anther matchup against the Warriors. The boys jumped out to a 4-0 lead in the 1st period and never looked back. Connor Cameron, who was recently named the TSR Hockey Forward of the Week in the EHLP, scored 4 goals in the contest, leading the Lumberjacks to a 12-2 win. Jacob Dillion, Grant Rosenberger, Connor Black, Jackson Clayton, Francesco Autore, Frank Mondi, Zack Selinger, and Zachary Miller had the other 8 goals in the win. Connor Schultz stopped 17 shots between the pipes.

The Lumberjacks looked for the sweep on Sunday and started off on the right note, as Dillion and Cameron notched 1st period goals to give them a 2-0 lead. The Warriors would cut into the deficit with a late period goal to make it a 2-1 game going into the 1st intermission. Speckhart and Autore went on to scored 2nd period goals for Vermont, just 39 seconds apart, to give the Lumberjacks a 4-1 lead heading into he final frame. After a Warriors power-play goal, the Lumberjacks answered with a trio of goals of their own from Cameron, Ben Rouillard, and Luke Dion and won the final game of the series by a score of 7-3. Dillon Whalen was solid between the pipes, stopping 30 shots in the win.

The EHL team is ready for the first showcase of the season this weekend at Rodman Arena in Walpole, MA, as their schedule includes matchups against the Philadelphia Little Flyers on Sunday and the Philadelphia Jr. Flyers on Monday. The EHLP squad on the other hand will stay home and square off against the Central Penn Panthers on Saturday. 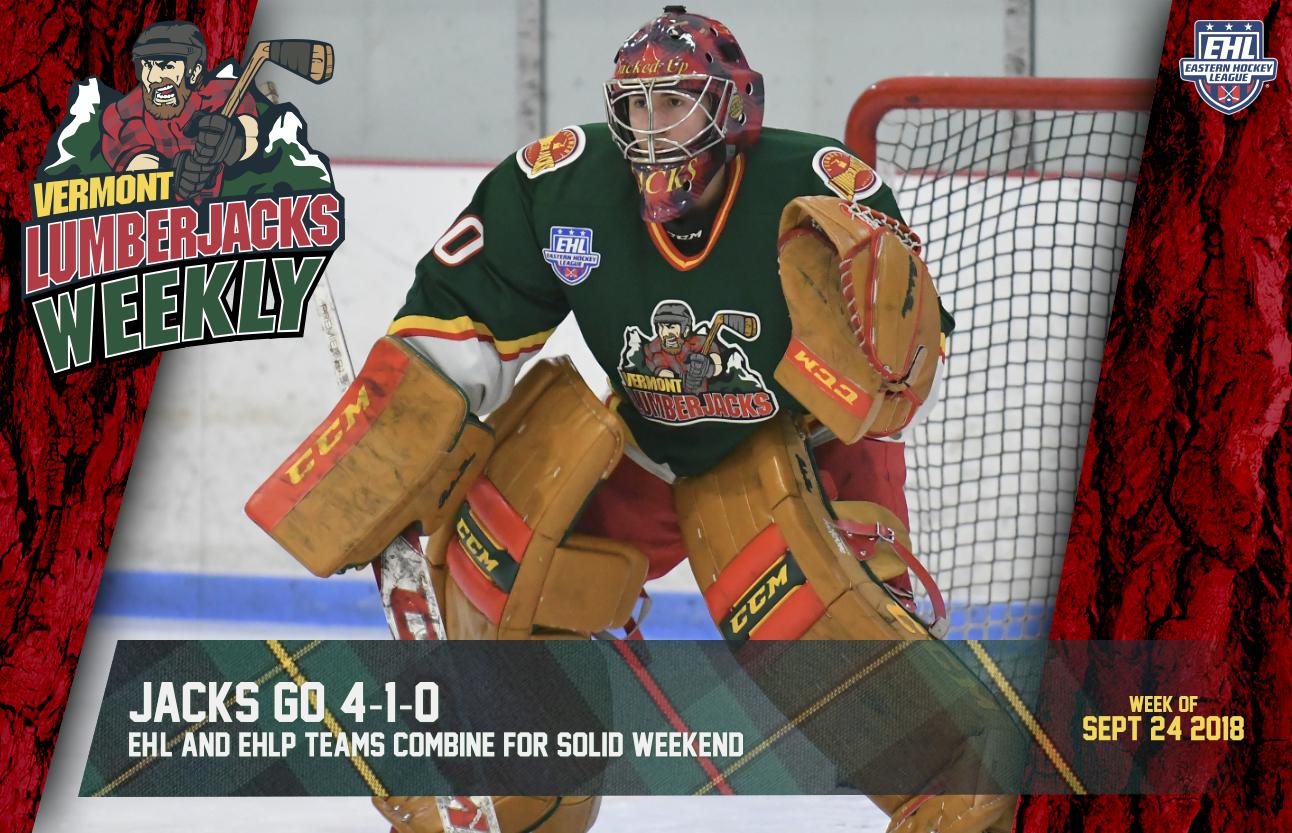