BURLINGTON, VT -- Both Lumberjacks teams got back to work this past weekend as the EHL squad took care of business with a weekend sweep of the Walpole Express, improving their record up to 3-3-0 for the season.

On the other side, the EHLP team took part in the first showcase of the year, going 3-1-0 over the weekend. For the season the Lumberjacks are now 7-2-0 in their first 9 games.

The Lumberjacks welcomed the 3-2-1 Walpole Express to town this past weekend for a pair of matchups against their New England South opponent. Jackson Aldrich started off the scoring on Saturday, by finding the back of the net on the power-play to give the Lumberjacks an early 1-0 lead. Aldrich would convert on another chance for his 2nd goal of the game around the halfway point of the 2nd period. The Express would then cut the lead in half toward the end of the period as Vermont had to settle for a 2-1 advantage going into the final frame.

In that final frame, Walpole came out strong with 2 goals of their own to take a 3-2 lead. After taking a penalty late in the game, Andrew Bechard converted for the Lumberjacks to knot up the score at 3 apiece. Following a scoreless overtime period, the Lumberjacks were able to grab the extra point by way of the shootout. Connor Carbo was solid in net, stopping 31 out of 34 shots in the victory.

For the back end of the series, the boys picked up right where they left off on Saturday, as Logan Discanio gave the Lumberjacks the early lead on the power-play. The Express would respond with a power-play goal of their own later in the period, but Adam Kusior gave the Lumberjacks the lead once again near the end of the frame. The 'Jacks then came out flying in the 2nd period, out-scoring the Express 4-0 with goals from Bechard, Mason Emoff, and Glynn Robitaille (2), to take a commanding 6-1 lead. Vermont would add 2 more power-play goals in the 3rd, as they went on to win by the final score of 8-2. Carbo was solid yet again between the pipes stopping 29 shots in the victory.

On the first day of the showcase in Philadelphia, the Lumberjacks squared off against the Philadelphia Little Flyers. The Lumberjacks struck first as Jackson Clayton broke the scoreless tie just over 2 minutes into the contest. However, the Little Flyers responded with a pair of quick goals of their own, to take a 2-1 lead. The lead was short-lived, as Nathan Damren answered for the Lumberjacks exactly a minute later to knot up the game at 2-2. The Little Flyers would take the lead again with a goal near the end of the half to own a 3-2 advantage going into the intermission.

As the 2nd period got started, Clayton answered for the Lumberjacks on the power-play to even things up once again. The boys kept the momentum as Jacob Dillion gave the Lumberjacks the lead just under 2 minutes later. However, the back and forth action continued as the Little Flyers found the back of the net near the end of the half and forced extra time. After a scoreless overtime, the Lumberjacks were able to come away with the extra point after winning by way of the shootout.

The Lumberjacks returned to the rink for 2 games against the Philadelphia Jr. Flyers on day #2 of the showcase. In the early matchup, despite being outshot 35-18, Jacob Dillion was able to find the back of the net twice as the Lumberjacks came away with the 2-0 win. Dillion Whalen was the star in net, stopping 35 shots for his first shutout of the young season.

The 2 teams went back at it again later in the day as Connor Cameron gave the Lumberjacks a quick lead at the beginning of the 1st half. However, the Jr. Flyers would put 3 goals up on the board as they took a 3-1 edge into the break. Ben Rouillard gave the Lumberjacks some life just under 3 minutes into the 2nd half, but that was the only goal that they could muster up in the frame as the Jr. Flyers added an empty-net tally to win the game by a 4-2 final.

On the final day of the showcase, the squad faced-off against the New Jersey Renegades to wrap-up the season series with the Mid-Atlantic Conference opponent. The Lumberjacks were also looking to avenge their 2-1 loss to the Renegades in the 1st game of the season.

After a quiet 1st half, Frank Mondi broke the silence with a short-handed goal in the final 2 minutes of the frame to give the boys a 1-0 lead. The Lumberjacks came out flying in the 2nd half with a trio of goals by Cameron, Clayton, and Raymond Miller to add to their lead. The Renegades would find the back of the net just once in the contest, as the Lumberjacks walked away from the 1st showcase of the season with a 3-1-0 record and an overall mark of 7-2-0.

The EHL squad will head south this upcoming weekend for a 3-game slate against the Rebels, Knights, and 87s.

The EHLP team on the other hand, will travel to Rodman Arena for a pair of matchups against the Walpole Express on Saturday and Sunday. 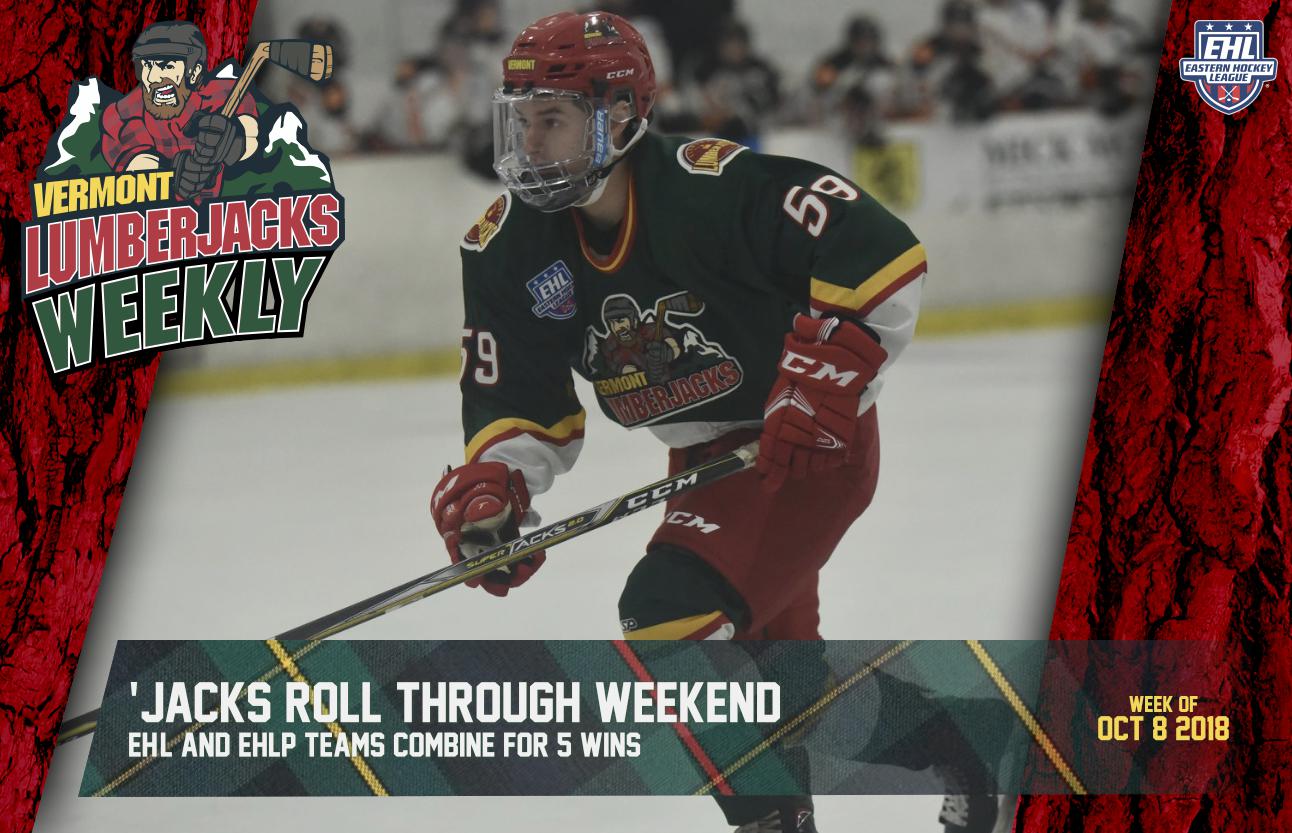