BURLINGTON, VT -- The Lumberjacks organization had a busy week with 8 total games on the road combined between the EHL and EHLP teams. The EHL squad went 1-4-0 over their 5 games this past week, but despite the losses, still sit in 3rd place in their division with a record of 6-7-1.

On the other hand, the EHLP squad owned a 1-1-1 record over this past weekend and finds themselves in 3rd place of the New England Conference with a record of 10-5-2 for the year.

The EHL squad started off their 5-game road trip with a matchup against the East Coast Wizards this past Tuesday. After a scoreless 1st period, the Wizards struck first on the power-play to take a 1-0 lead early in the 2nd. Glynn Robitaille got the Lumberjacks on the board near the halfway point of the frame to knot up the game at 1 apiece, and then Andrew Bechard gave Vermont the lead, converting on a scoring chance near the end of the frame. However, the Wizards responded with a pair of goals in the 3rd period, including a tally in the final 20 seconds and won the game by a final of 3-2. Connor Carbo stopped 28 shots in the loss.

The boys got right back to work the very next day as they traveled down to Hyannis to face-off against the Seahawks Hockey Club for the 1st of 2 matchups against the conference opponent this season. Colin Philippon got the Lumberjacks on the board 1st with a goal just over 6 minutes into the contest. However, the Seahawks would quickly rally for a pair of goals to take a 2-1 lead near the midway point of the frame. David Rosales would answer for the Lumberjacks just seconds later to make it a 2-2 game at the 1st intermission. The Seahawks would pick up the only goal of the 2nd frame as they took a 3-2 lead into final period. The Lumberjacks were unable to find the back of the net for the rest of the game and lost by a final score of 5-2.

After a couple days off, the team headed up to Laconia for a 3-game series against the New England Wolves. Tyler Lisieski got things started for the Lumberjacks, opening up the scoring just 5 minutes into the contest. Rosales then extended the lead with a short-handed goal near to end of the frame as they Lumberjacks took a 2-0 advantage into the 1st intermission. Mason Emoff had the Lumberjacks next 2 goals giving his team a commanding 4-goal lead at the 2nd intermission. Robitaille added some insurance on the power-play near the end of the game as the Lumberjacks won the 1st game of the series by a final score of 5-1.  Peter Siolas was solid between the pipes, recording 26 saves for his 3rd win of the season.

The boys returned to the rink the very next day for the 2nd game of the 3-game set. The Lumberjacks came out of the gates flying, outshooting the Wolves 17-3 in the 1st frame as Bechard found the back of the net near the 10-minute mark of the period to give the squad a 1-0 lead. The Wolves responded with a goal of their own in the 1st couple minutes of the 2nd period to knot up the game 1 apiece. However, Robitaille would give the Lumberjacks the lead less than a minute later, converting on the power-play. After Cory Doney made the game 3-1, the Wolves continued to battle back and notched a pair of quick goals to knot up the score at 3-3. The wild 2nd period wasn't over as Doney gave the Lumberjacks a 4-3 lead with a short-handed tally in the final minutes of the frame. The Wolves would tie up the game in the 3rd period on the power-play and the game remained scoreless for the rest of regulation. After a quiet overtime, the Wolves were able to grab the extra point in the shootout. Siolas was busy in net, stopping 37 shots in the losing effort.

On Sunday, the Lumberjacks capped off their 3-game set with the Wolves with another high scoring affair. After falling behind 2-0, Bechard put the boys on the board near the 4-minute mark of the 1st period. However, the Wolves would score a short-handed goal in the final minute of the frame to take a 3-1 lead into the break. The Lumberjacks fought back as Logan Discanio found the back of the net around the 9-minute mark of the 2nd period to make it a 3-2 game. Unfortunately, the Wolves would answer with a pair of quick goals to extend their lead out to 5-2. The offense continued for both teams in the final frame, as both teams scored 4 goals and the Wolves won by a final score of 9-6. Emoff (2), Robitaille, and James Boisvert had the 3rd period tallies.

On Friday, the EHLP squad traveled over to Laconia with the EHL team for their own 3-game series with the Wolves. After falling behind 2-0 in the 1st period, Ryan Mosher got the Lumberjacks on the board with an unassisted goal around the halfway point of the 2nd frame to make it a 2-1 game. However, the squad couldn't find the back of the net for the rest of the day as they fell to the Wolves by a score of 4-1 in the 1st of the 3-game set. Dillion Whalen collected 30 saves in the losing effort.

The squad returned to the rink the next afternoon for game #2 of the series and fell behind early before Jacob Dillion evened things up with a goal near the 5-minute mark of the 1st frame. The Wolves took the lead again on the power-play in the 2nd period, but that was quickly answered with a power-play goal from Mosher to knot up score at 2-2. The back and forth action continued throughout the 3rd period, as each team scored a pair of goals. Luke Dion tied up the game for the Lumberjacks with just 5 seconds left in regulation, forcing overtime. After a scoreless overtime, the Wolves took the extra point by way of the shootout.

The boys returned to action the next morning and were looking for a different result than the past 2 days. However, Sunday got off to a rocky start as the Wolves scored twice in the 1st period and took a 2-goal advantage into the 1st intermission. The Lumberjacks came out strong in the 2nd though, as Ben Rouillard cut the lead in half just 30 seconds into the period. The Wolves would take the 2-goal lead back on the power-play, but Mosher answered a few minutes later with a power-play goal of his own to cut the deficit back down to 1. The Wolves would tack on another goal late in the frame and took a 4-2 lead into the final period. The boys came out buzzing in the 3rd, outshooting the Wolves 19-9 and found the back of the net 3 times to complete the comeback and win by a final score of 5-4. Jacob Dillon notched the game-winning goal while the team was short-handed with just under 4-minutes remaining in regulation. Connor Schultz stood tall between the pipes, stopping 26 shots in the win.

One busy week leads into another for the Lumberjacks' EHL team, as they host the New Hampshire Avalanche this afternoon at Plattsburgh State University. Vermont will then set out for Brewster, NY and a pair of weekend matchups against the New York Applecore.

The EHLP team on the other hand, will enjoy a week off before heading on the road for a pair of matchups next weekend. 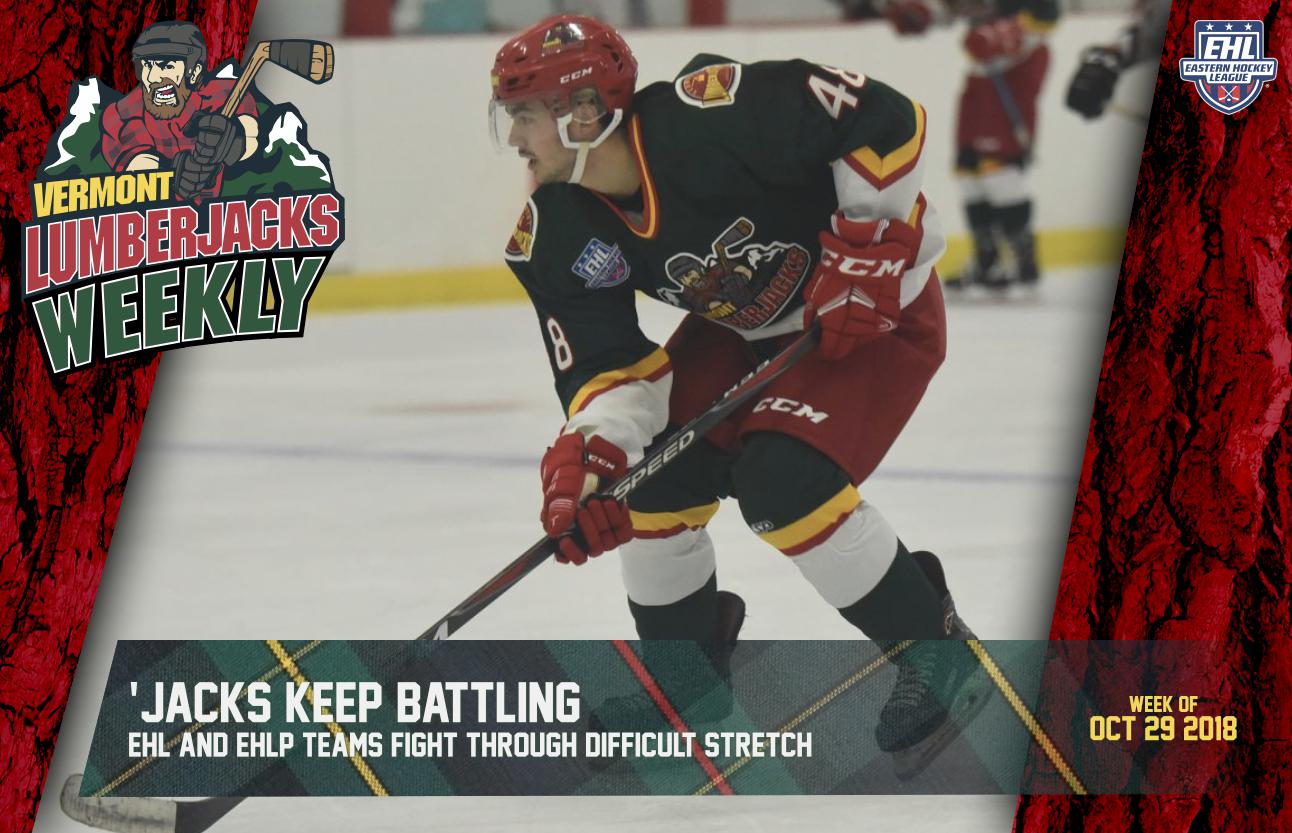