EHL Team Gets Back in Win Column with 6-2 Victory

BURLINGTON, VT -- The EHL team got back to work this past week, going 1-2-0 in their 3 games. As of today, the Lumberjacks still sit in 3rd place in the New England Division with a record of 7-9-1. Vermont's 15 points puts them just 6 points behind the 2nd-place Boston Jr. Rangers.

The EHLP team on the other hand was off last week, but still finds themselves in 3rd place as well, with a record of 10-5-2 through their first 17 games.

On Wednesday, the EHL squad faced-off against the 1st-place New Hampshire Avalanche at Plattsburgh State for the 1st of 4 divisional matchups this season. After falling behind 2-0, Geordan Buffoline cut the lead in half with a goal near the 8-minute mark of the 1st period. The Avalanche would add 2 more goals in the 2nd frame to take a 4-1 lead into the final period. Cory Doney got the Lumberjacks back in the game as the defensemen found the back of the net on the power-play to cut the deficit down to 4-2. However, despite a late goal from MacCallum Brown, the Lumberjacks fell short and lost the game by a final of 4-3. Connor Carbo stopped 30 shots in the loss.

On Saturday, the boys headed down to Brewster, NY for a pair of matchups against the New York Applecore. Andrew Bechard got the Lumberjacks on the board 1st with a power-play goal around the 5-minute mark of the 1st frame. The Applecore would answer with a trio of goals of their own in the 2nd period to take a 3-1 lead into the final frame. Despite a late power-play goal from Zachary Booth, the Lumberjacks fell by a final score of 5-2.

The squad was looking for a different result when they returned to the rink the very next day and got off on the right foot as Logan Discanio found the back of the net just over a minute into the contest. The game remained 1-0 until early in the 2nd frame when Mason Emoff scored short-handed to give the Lumberjacks a 2-goal advantage. The Applecore responded with a goal of the their own a few minutes later to cut the lead in half, but it was quickly answered by Glynn Robitaille in the final minute of the period to give the boys a 3-1 lead going into the break.

Robitaille had the hot hand as the forward found the back of the net for the 2nd time with a goal around the 8-minute mark of the 3rd. The Applecore got a goal back a few minutes later to make it a 4-2 contest, but the game got out of reach thanks to a pair of insurance goals from Booth and Bechard, and the Lumberjacks ended their 5-game losing skid with a 6-2 victory. Carbo made 21 saves in the winning effort.

The EHL team will head to Haverhill, MA this upcoming weekend for the 2nd showcase of the season. Vermont's schedule includes a matchup against the New Jersey 87s on Sunday, followed by a matchup with the Wilkes-Barre/Scranton Knights on Monday.

The EHLP squad on the other hand, will travel to Tewksbury, MA to take on the Boston Jr. Rangers this upcoming Saturday before heading to their 2nd showcase of the season. 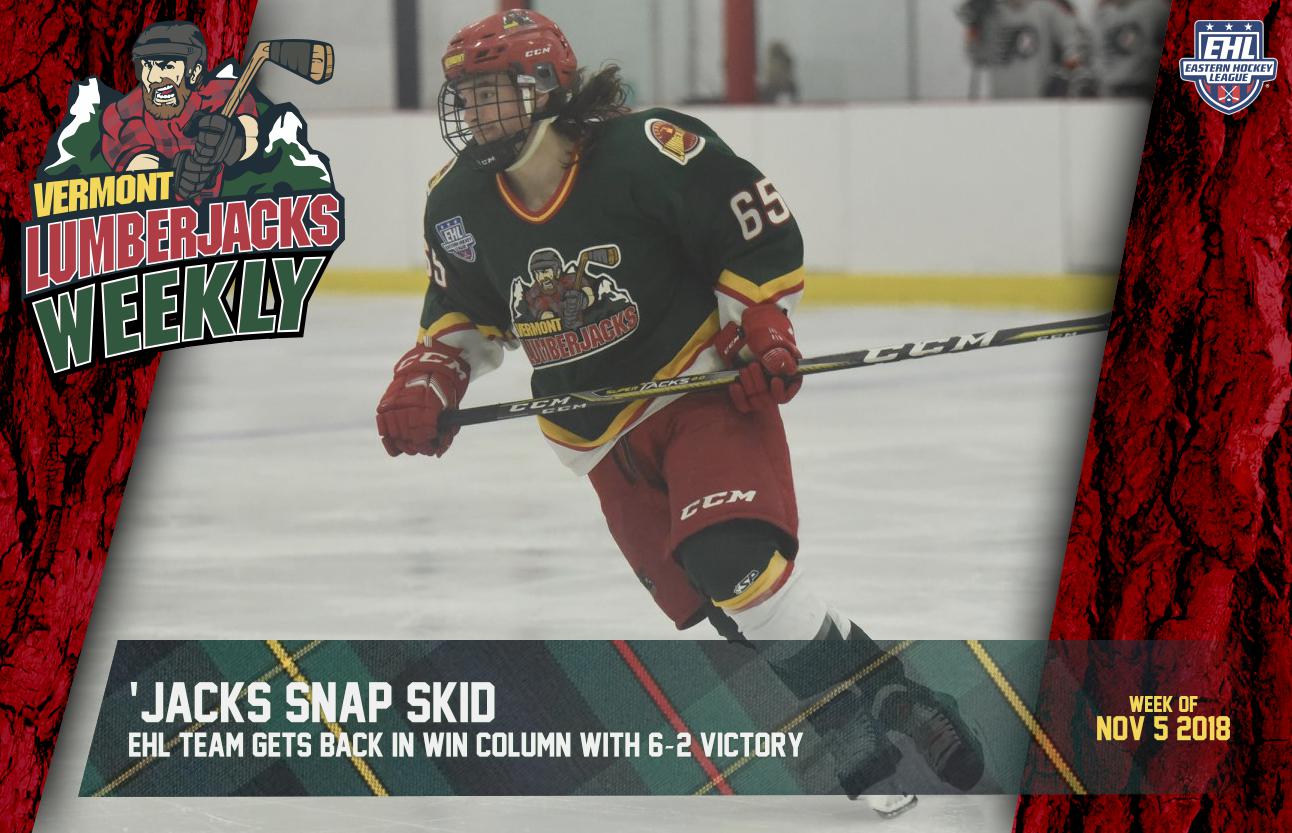