BURLINGTON, VT -- Both squads were back in action this past week as each team participated in a league-wide showcase. The EHL team went 1-0-1 in their schedule, and still finds themselves in 3rd place in the North Division of the New England Conference, with a record of 8-9-2. The EHLP squad on the other hand, went 1-2-0 in their 3 total games and sit in 3rd place as well, with a mark of 11-7-2.

On day #1 of the showcase, the Lumberjacks squared off against the New Jersey 87s to wrap up their season series with the Mid-Atlantic Conference opponent. The 87s led 1-0 after the 1st half and took a 2-goal lead with just under 3 minutes to play, as the game seemed all but over, that was until David Rosales gave the Lumberjacks some life. Rosales scored a goal with just 1:52 remaining on the clock. The momentum stayed with the Lumberjacks as Dan Barry notched his 1st goal with his new team, just 49 seconds later to tie up the score at 2 goals apiece. After a scoreless overtime period and a lengthly 8-man shootout, the 87s would get the extra point in the end. Connor Carbo made 30 saves in the losing effort.

On day #2 of the showcase, the squad faced-off against the Wilkes-Barre/Scranton to finish off their season series with the Knights. The Lumberjacks won by a final of 5-3 back in October and looked for the same result on Monday. After falling behind early, Glynn Robitaille found the back of the net on the power-play near the 16-minute mark of the half, to knot up the game at 1 goal apiece. The power-play unit continued to click for the Lumberjacks, as Geordan Buffoline converted on a scoring chance to give the boys a 2-1 lead. Mason Emoff then added some insurance near the end of the frame, as Vermont won by a final score of 3-1. Peter Siolas was terrific in net, stopping 33 shots in the win, a performance that earned himself TSR Hockey Goaltender of the Week honors.

On Saturday, the EHLP team traveled down to Tewksbury to face-off against the Boston Jr. Rangers for the first of 7 matchups against their divisional opponent this season. After the Rangers scored first, Frank Mondi evened things up at 1 goal apiece around the 3-minute mark of the 1st frame. However, the Rangers would answer with 6 unanswered goals and won the game by a final of 7-1. Connor Schultz was busy in net, stopping 35 shots in the loss. The boys will get another crack at their division rival this upcoming weekend with a 3-game series in Vermont.

On Sunday, the squad faced-off against the Central Penn Panthers at Lawrence Valley Forum on day #1 of the showcase. The Lumberjacks won the first matchup between the 2 teams by a score of 9-4 and Sunday wasn't any different. The boys wasted no time as Zack Selinger got the Lumberjacks on the board just 30 seconds into the game. Ben Rouillard found the back of the net a couple minutes later, followed by a Ryan Mosher short-handed goal after that gave the Lumberjacks an early 3-0 lead. Francesco Autore got in on the action, scoring near the 12-minute mark of the frame to give the boys a 4-goal advantage. However, the Panthers would come storming back with 4 unanswered goals of their own to make it a 4-4 game at the intermission. Nick Speckhart then gave the squad the lead again with a power-play tally in the opening minutes of the 2nd half. The Lumberjacks got some insurance from Patrick Williams a few minutes later, but the Panthers would come back yet again, with a pair of goals to send the game into extra time. After a scoreless overtime period, the Lumberjacks were able to get the extra point by way of the shootout. Alex Herman stopped 24 shots between the pipes in the winning effort.

On day #2 of the showcase, the Lumberjacks squared off against the Philadelphia Little Flyers. The Lumberjacks won the first matchup between the 2 teams back in October by a score of 5-4. The Little Flyers got the first 2 goals of this one and held the lead until Rouillard found the back of the net with just under 2 minutes remaining in the contest. Despite outshooting the Little Flyers in the final frame, the boys couldn't beat find the back of the net again as they lost by a final of 2-1. Dillon Whalen was solid between the pipes, stopping 29 shots in the losing effort.

The EHL team will host the Boston Jr. Rangers this upcoming weekend with matchups on both Saturday and Sunday. The EHLP squad on the other hand, will host the Rangers for a 3-game series starting tonight. 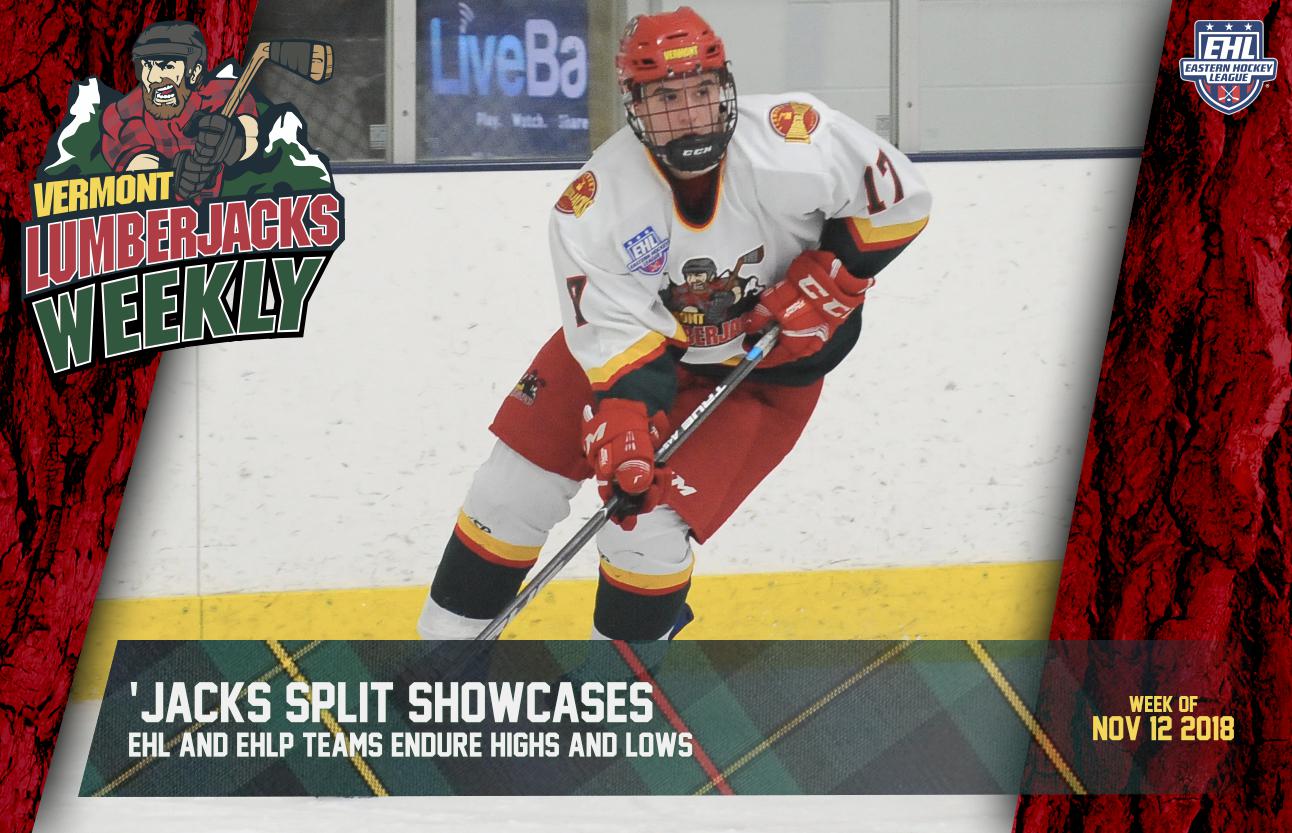