BURLINGTON, VT -- Both squads were back in action the weekend before Thanksgiving, each hosting a series against the Boston Jr. Rangers. The EHL team won the first game and dropped the second, giving them an overall record of 9-10-2 for the season. The EHLP team on the other hand, went 0-2-1 in their games, but despite the losses, they still sit in 3rd place in the conference with a record of 11-9-3.

On Saturday, the EHL squad welcomed the Rangers to town for the first of four meetings this season. After a scoreless 1st period, The Rangers struck first with a goal around the 8-minute mark of the middle frame to take the lead. The game remained scoreless until Cory Doney found the back of the net on the power-play, tying up the score at 1 apiece. The game headed into overtime and eventually a shootout where the Lumberjacks were able to take the extra point. Peter Siolas stopped 24 shots in the winning effort, giving him a total of 5 wins on the season.

The boys returned to action the very next day for a second matchup against the Rangers. The Lumberjacks fell down 2-0 early, and then Logan Discanio cut the lead in half around the 12-minute mark of the 2nd period. The Rangers would answer with a goal just a few minutes later, but Discanio would clap right back with his second goal of the contest just passed the 9-minute mark of the frame. However, the Rangers would add a power-play goal near the end of the period and took a 4-2 lead into the break. The Rangers added another goal in the first minute of the 3rd period, to take a 3 goal advantage. Despite a tally from Geordan Buffoline, the Lumberjacks lost the second game of the series by a final score of 5-3.

The EHL team wrapped-up play with a game on the day before Thanksgiving against the New Hampshire Avalanche. Unfortunately for Vermont, the second matchup finished in a similar fashion to the first meeting, with the Lumberjacks losing by a single goal. The difference with this game, was that the EHL team did get a point in the standings, by forcing the game into overtime.

With the tough 5-4 loss, the Lumberjacks find themselves in possession the 6th and final playoff spot heading into the month of December.

On Friday, the EHLP squad welcomed the Rangers to town for the start of a 3-game series. Ryan Mosher got things going for the Lumberjacks, giving them an early 1-0 lead in the opening frame. The game remained scoreless until the Rangers evened things up just over 3 minutes into the 3rd period. The Lumberjacks answered right back as Ben Rouillard found the back of the net just a few minutes later, for his 7th tally of the season. However, the Rangers would score a power-play goal near the end of the period and another power-play goal in overtime, to win by a final of 3-2. Dillion Whalen was terrific in net, stopping 45 shots in the overtime loss.

The boys returned to the rink on Saturday for the second game of the series and got off to a hot start as both Nick Speckhart and Jackson Clayton scored 1st period goals and the Lumberjacks took a 2-0 lead into the break. The Rangers answered back with a pair of goals of their own to knot up the game at 2-2, early on in the middle frame. Mosher then gave the boys the advantage again with a goal just 18 seconds before the horn sounded. However, the Rangers rallied for 6 unanswered 3rd period goals, and the Lumberjacks lost by a final score of 8-3.

On Sunday, the squad wrapped-up their series with the Rangers as Mosher gave the boys an early 1-0 lead just 40 seconds into the game. The goal was Mosher's 3rd of the weekend, and team-leading 12th of the season. The Rangers tied up the game just over 2 minutes into the 2nd frame, but it was quickly answered just 25 seconds later by Zack Selinger to give the Lumberjacks back the lead. However, the Rangers tied up the game once more near the end of the period, and took the lead late in the 3rd, as they went on to win by the final score of 3-2. Connor Schultz stopped 16 shots in the loss.

Looking ahead to the month of December, the EHL team will enjoy 3 games at home followed by a pair of showcase matchups before heading home for the holidays. The boys will return to action on December 5th against the East Coast Wizards, and then stay home for a 2-game weekend series against Team Maryland. The showcase will then bring the team a chance at redemption against the Philadelphia Little Flyers and the Philadelphia Jr. Flyers, the 2 teams Vermont lost to at the October Showcase.

On the other end, the EHLP team has just 4 games left before the break around Christmas time, with all of their matchups set to take place at home. The Lumberjacks will host the Walpole Express for a pair of games this weekend, followed by a weekend off, and then a pair of matchups against the Connecticut Chiefs on December 16th and 17th. 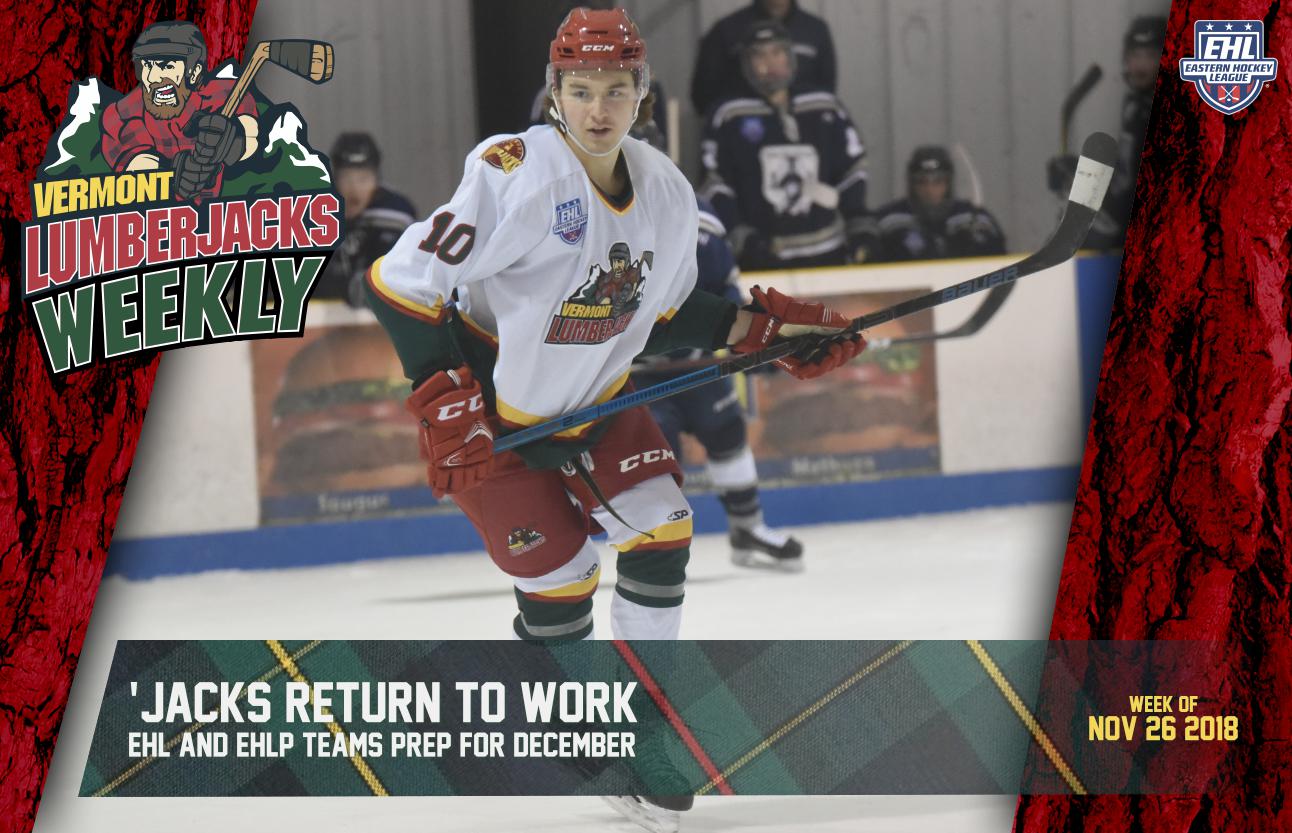