BURLINGTON, VT -- The EHL squad was back in action this past week as they won all three of their games. With the trio of victories, the Lumberjacks move to 12-10-3 on the season and still remain in 3rd place in their division. The EHLP squad on the other hand was off until this upcoming Sunday and Monday, when they will host the Connecticut Chiefs for a pair of games.

On Wednesday, the Lumberjacks welcomed the East Coast Wizards to town to cap off the season series with the conference opponent. The Lumberjacks lost the previous matchup to the Wizards back in October, but Wednesday was a different story as Cory Doney wasted no time by scoring just 26 seconds into the game. Mason Emoff added to the lead with a goal a few minutes later, to give the Lumberjacks a 2-0 advantage. The game remained scoreless until the 8-minute mark of the second period when Dan Barry found the back of the net on the power-play, to give the Lumberjacks a 3-goal lead. The Wizards battled back and responded with pair of goals of their own, but it wasn't enough, as Glynn Robitaille sealed the win with an empty-net tally in the final minute, giving Vermont a 4-2 win. Connor Carbo was solid in net, stopping 31 shots in the win.

On Saturday, the Lumberjacks welcomed Team Maryland into Burlington for a pair of matchups over the weekend. Saturday’s game marked David Rosales' 200th junior game with the Lumberjacks organization, and the rest of his teammates rallied behind. Barry found the back of the net on the power-play around the 12-minute mark of the frame, to give his team the early lead. The Lumberjacks kept up the pressure in the 2nd period, as Emoff scored a short-handed goal around the 14-minute mark, making it a 2-0 advantage. Ben Rouillard gave the Lumberjacks a 3-goal lead just a few minutes later, however, Maryland rallied back with a pair of goals of their own to cut the Lumberjacks lead back down to 1. Logan Discanio would get the 2-goal advantage back in the final minute of the frame as the Lumberjacks led 4-2 going into the intermission. Adam Kusior added an insurance goal in the 3rd, as the boys held on for a 5-2 win. Carbo was solid in net yet again, stopping 18 shots in the win.

The Lumberjacks got back to work the following day to finish their season series against Maryland. Conor Foley gave the boys the early lead just over 5 minutes into the game. Geordan Buffoline then found the back of the net short-handed in the final minute of the period as the Lumberjacks took a 2-0 lead into the first intermission. Tyler Lisieski gave the Lumberjacks a 3-goal advantage near the hallway mark of the 2nd frame, and the boys didn't look back from there. Vermont scored 4 more times in the 3rd period, and won the game by a final of 7-0. Buffoline, Foley, Robitaille, and Barry had the 3rd period goals. Carbo made all 26 saves in the shutout win bringing his overall record up to 7-6-1 on the season.

The EHL squad will head to Connecticut to participate in a league-wide showcase, as they are scheduled to square-off against the Philadelphia Little Flyers on Thursday, followed by a matchup with the Philadelphia Jr. Flyers on Friday.

The EHLP team on the other hand will close out their first half with a pair of home matchups against the Connecticut Chiefs on Sunday and Monday. 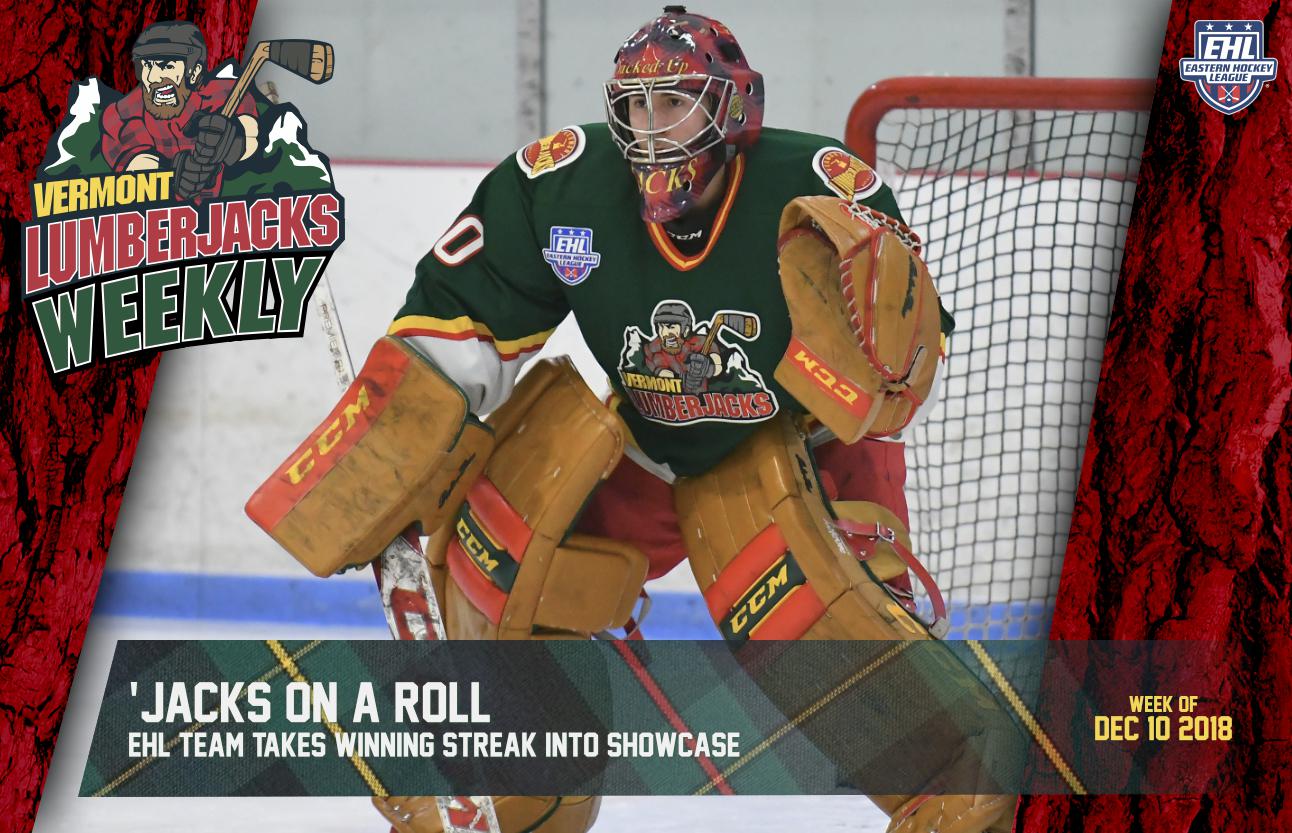