BURLINGTON, VT -- Both squads were back in action this past week, as the EHL team participated in a league-wide showcase in Newington, CT. The Lumberjacks dropped the first game of the showcase, but rebounded on the second day with a win over the Philadelphia Jr. Flyers. To cap off the first half, Vermont fell 4-2 yesterday afternoon at the hands of the New Hampshire Avalanche. After the week, the Lumberjacks still sit in 3rd place in their division with a record of 13-12-3.

The EHLP team on the other hand, took care of business with a sweep of the Connecticut Chiefs, and they currently sitting in 3rd place in their conference with a record of 15-9-3.

On the first day of the showcase, the Lumberjacks squared-off with the Philadelphia Little Flyers. Thursday’s matchup marked the second and last time the two teams will be meet during the regular season, as the Little Flyers won the first matchup back in October. After falling behind 1-0, James Boisvert knotted things up at one goal apiece near the 18-minute mark of the opening half. However, the Little Flyers responded with a goal near the end of the frame to take back the lead. The Little Flyers kept up the pressure in the 2nd half, scoring a pair of power-play goals to take a commanding 4-1 lead. Glynn Robitaille answered with just over 6 minutes left on the clock, but it wasn't enough as the Lumberjacks dropped the first game of the showcase, losing by a final score of 5-2.

On the second day of the showcase, the Lumberjacks matched up against the Philadelphia Jr. Flyers. The Lumberjacks lost the previous game between the two teams back in early October, and Friday’s game got off to a bit of a rocky start as well. The Jr. Flyers took an early 2-goal lead in the 1st half, and outshot the Lumberjacks 21-16 in the opening frame. However, the 2nd half was a different story all together, as Robby Feathers made it a 2-1 game just over 3 minutes into the period. The game remained scoreless until the final minute of the half, when Mason Emoff found the back of the net on the power-play to tie things up at 2 goals apiece. The Lumberjacks carried the momentum into overtime as Dan Barry notched his 5th goal of the year from the blue line, to give the boys the victory. Peter Siolas was terrific between the pipes, stopping 33 shots for his 5th win of the year.

Wrapping things up, the Lumberjacks took a trip down to Hooksett, NH yesterday afternoon. After giving up the first two goals of the hockey game, it felt like Vermont was climbing an uphill battle all day. Twice, Vermont was able to get back to within a goal, but they were unfortunately never able to tie up the game. Add in some bad luck with a few posts hit as well, and ultimately, a late empty-netter sealed the deal for the Avalanche. Logan Discanio and Zachary Booth scored the goals for the Lumberjacks.

The EHLP squad welcomed the Connecticut Chiefs to town this past weekend for a pair of divisional matchups. Sunday’s game marked the first of six meeting between the two teams this season. The game remained scoreless until the 3rd period, when the Chiefs grabbed the lead just 11 seconds into the frame. However, Zachary Miller answered just a few minutes later to tie the game up at one. Luke Dion then gave the boys the lead just a few minutes later, with a short-handed tally. The Chiefs responded with a goal to even things up once again, but Ryan Mosher put away the game-winning goal with 2:27 remaining in regulation, as the Lumberjacks won by a final score of 3-2. Dillion Whalen was solid between the pipes, stopping 24 shots in the win. With the win in net, Whalen was awarded EHLP Goalie of the Week Honors for the 2nd time this season.

The boys returned to action the very next day for another matchup with the Chiefs, and didn't waste any time getting started as Jacob Dillion found the back of the net just 1:30 into the game. Dion added to the lead with a goal near the end of the period, as the squad took a 2-0 lead into the 1st intermission. After a scoreless 2nd period, the Chiefs got on the board in the first few minutes of the 3rd and cut the deficit in half. However, Dion added two more goals after that to complete the hat-trick, giving the forward a total of eight goals for the season. Zack Selinger added a late insurance goal in the final minute of regulation, as the Lumberjacks cruised to a 5-2 victory. Connor Schultz was busy in net, stopping 34 shots for his 4th win of the season.

Both teams are now heading home for the holiday break, with January 5th circled on their calendars. That Saturday, each team will return to action with a pair of matchups against the Connecticut Chiefs. The EHLP teams will hit the ice first at 12:00pm, followed by the EHL game at 3:00pm. 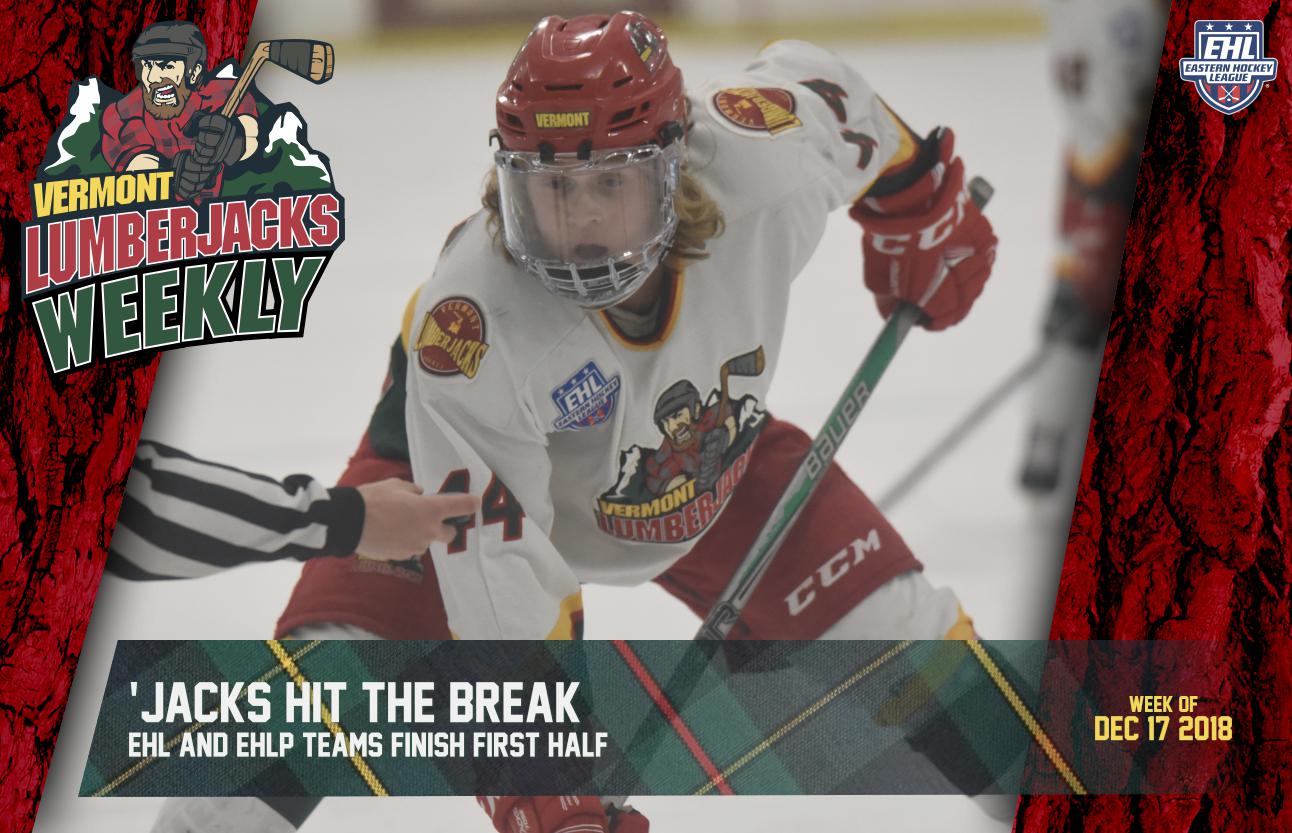