BURLINGTON, VT -- Both Lumberjack teams have kicked off the 2nd halves of their respective seasons, combining to go 4-1-0 in the five games that have taken place to far in 2019. As of today in the EHL, the Lumberjacks still remain in 3rd place in their division with a record of 15-12-3, and are now just six points behind the 2nd-place Boston Jr. Rangers. The EHLP squad on the other hand finds themselves still in 3rd place as well, with a record of 17-10-3.

Last Saturday, the EHL team kicked-off their second half with a matchup at home against the Connecticut Chiefs. Saturday’s game marked the first of two against the Chiefs during the regular season, and the Lumberjacks grabbed the early lead as Connor Foley found the back of the net around the eight-minute mark of the opening period. Logan Discanio made it a 2-0 game with a goal just over a minute later. However, the Chiefs responded with three goals in the 2nd period, and took the lead on the power-play halfway through the middle frame. Andrew Bechard scored a power-play goal of his own near the end of the period, to knot up the game at three goals a piece heading into the 3rd.

The Chiefs took another penalty in the first minute of 3rd, and Bechard found the back of the net again, giving his team the 4-3 advantage. Connor Carbo was able to hold off the Chiefs for the rest of the game for his 8th win of the year.

Fast-forward to his past Sunday, and the EHL squad faced-off against the New England Wolves in Walpole, MA, at the final league-wide showcase of the season. Going into the contest, the Lumberjacks held a 1-1-1 record against their division rival this year, with three games remaining. The Wolves got on the board first with a short-handed goal near the end of the 1st half, but Adam Kusior answered just 30 seconds later to tie the game up at one. The Lumberjacks dominated the Wolves in the 2nd half, scoring six unanswered goals, and won the game by a final of 7-1. Geordan Buffoline (2), Landon Michniak, Logan Discanio, and Colin Philippon (2) had the second half goals. Kyle Konin stopped 18 shots in his first win since being acquired from the New Hampshire Avalanche.

The EHLP squad also hosted the Connecticut Chiefs on Saturday the 5th, in their third meeting of the season. The Lumberjacks won the previous two matchups in December before the holiday break, and picked up right where they left off. After the Chiefs scored first, both Aaron Damren and Ryan Mosher answered quickly for the Lumberjacks to give themselves a 2-1 lead. The game remained scoreless until the 3rd period when Raymond Miller found the back of the net near the ten-minute mark of the frame, giving his team a two-goal advantage. However, the Chiefs answered back just 18 seconds later to cut the deficit in half. Luke Dion turned things back around with some late insurance, but once again the Chiefs wouldn't quit, as they scored a goal in the final two minutes to make it a one goal contest. Connor Schultz was able to hold off the Chiefs for the rest of the game and Nathan Damren added an empty-net goal in the final second to seal the victory.

Th Premier squad traveled down to Walpole, MA this past weekend for a pair of games on Saturday and Sunday against the Express. Going into the weekend, the Lumberjacks held a perfect 4-0-0 record against the Express so far this season. Saturday’s game was a defensive battle as the game remained scoreless until the Lumberjacks grabbed the extra point in the shootout. Dillion Whalen was terrific in net, stopping 34 shots for his 7th win of the season.

Flip over to Sunday's matchup, and it was a much different story, as the Express shutout the Lumberjacks by a final score of 5-0.

The EHL squad will start up a six-game home stand this upcoming weekend, with a matchup against the Seahawks Hockey Club on Friday, followed by a game against the Connecticut Roughriders on Saturday.

On the other end, the EHLP squad has this upcoming weekend off, but will get back to work on the 25th and 26th of this month with a pair of home matchups against the Philadelphia Revolution. 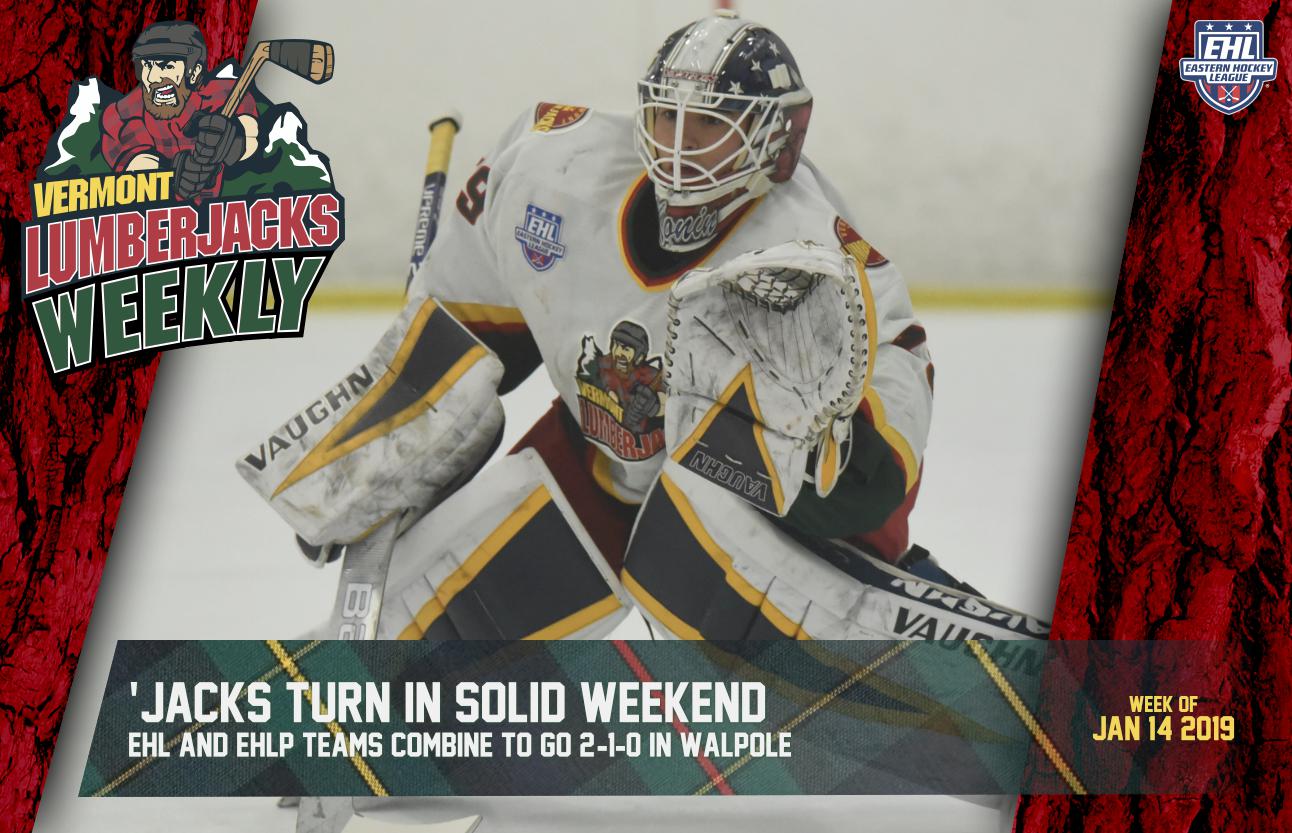