BURLINGTON, VT -- Both Lumberjacks squads were back in action this past week as the EHL team took care of business by winning both of their matchups. After the pair of victories, the Lumberjacks still sit in 3rd place in their division and 6th place in the conference with a record of 18-12-3. The EHLP squad on the other hand dropped both of their games over the weekend, but despite the losses still finds themselves in 3rd place in their conference with a mark of 17-12-3.

On Friday, the EHL squad welcomed the Philadelphia Revolution to town for a pair of games over the weekend. After falling behind 1-0, Mason Emoff got the Lumberjacks on the board via the power-play just under six minutes into the middle frame. David Rosales gave the boys the lead just a few minutes later, but the Revolution would tie up the game in the final minute of the period. The Lumberjacks then came out flying in the third as Adam Kusior gave the boys the lead just over six minutes into the frame. The special team units continued to click for the Lumberjacks as Glynn Robitaille, Geordan Buffoline, and Jackson Aldrich all added power-play goals propelling the Lumberjacks to a 6-2 victory. Kyle Konin stopped 23 shots for his 10th win of the season, and 3rd since joining the team at the beginning of the month.

On Saturday, the boys looked to extend their winning streak out to five games and things got off on the right note as the Lumberjacks scored four goals in less than three minutes near the end of the 1st period, to take a commanding 4-0 lead into the break. Robitaille, Conor Foley, Cory Doney, and Colin Philippon had the goals. The Revolution would get on the board in the 2nd period, but Emoff put the game out of reach with a pair of short-handed goals later in the game and the Lumberjacks capped off their weekend with a 6-1 victory. Connor Carbo stopped 23 shots for his 9th win of the season.

On Friday, the EHLP team also welcomed the Philadelphia Revolution to town for a pair of games over the weekend. The Revolution took the early lead in the 1st period and scored two more goals early in the 2nd frame to take a 3-0 advantage. Connor Cameron got a goal back for the Lumberjacks a few minutes later, to cut the deficit down to two goals. Jacob Dillion was then able to find the back of the net two times in the 3rd period, but it wasn't enough as the Revolution added three more goals of their own, and won by a final of 6-3. Alex Herman was busy in net, stopping 30 shots in the loss.

On Saturday, the boys returned to the rink for another matchup against the Revolution. After falling behind again early, Luke Dion converted on the power-play around the 12-minute mark of the 1st period to make it a 1-1 game. Cameron gave the boys the lead in the 2nd frame on the power-play, but the Revolution responded with a goal of their own just a few minutes later. Unfortunately, the Revolution rallied for three more unanswered goals and won the game by a final of 5-3.

Both Lumberjacks squads will gear up for a busy slate of games in the week ahead, as the EHL team will welcome the Connecticut Roughriders to town on Thursday followed by a pair of games at home against the New England Wolves on Saturday and Sunday.

The EHLP squad will stay home as well, as they also get set to take on the New England Wolves on both Saturday and Sunday. 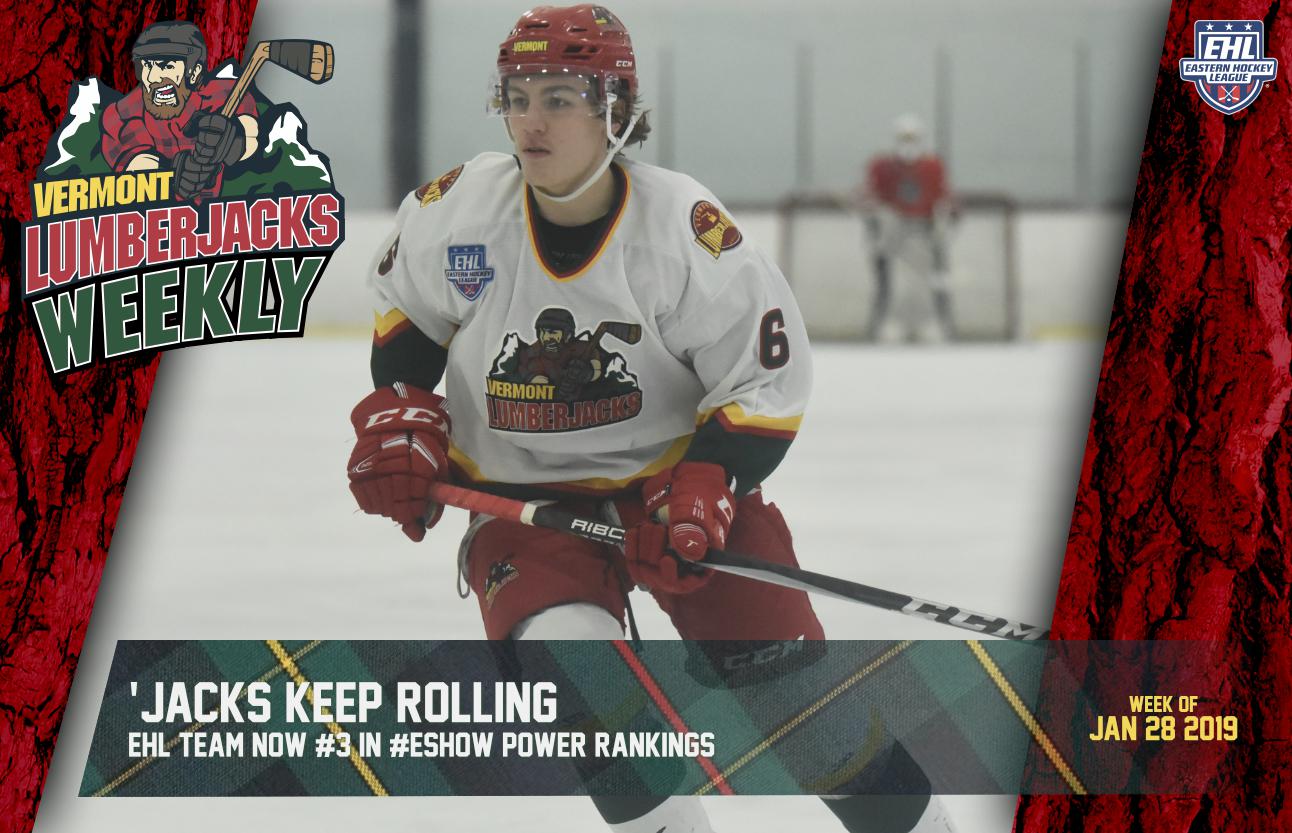