The EHLP squad on the other hand dropped both of their games over the weekend, but despite the losses still finds themselves in 3rd place in their conference with a mark of 17-14-3.

On Thursday, the EHL team welcomed the Connecticut Roughriders to town for a potential playoff preview. Thursday’s game marked the first meeting between the two teams who sit right next to each other in the conference standings. The Roughriders came out strong and took a 2-0 lead just 1:30 into the game and held that lead into the first intermission. Dan Barry put the Lumberjacks on the board just over three minutes into the 2nd frame to cut the deficit in half. Logan Discanio tied up the game a few minutes later on the power-play and the Lumberjacks didn't look back from there. Conor Foley added a pair of goals near the end of the period, and Barry sealed the deal with an empty net goal in the third, as the Lumberjacks cruised to a 5-2 win. Kyle Konin stopped all 35 shots that he faced in the relief effort.

On Saturday, the New England Wolves came to town for a pair of games over the weekend to finish off the regular season series. Going into the weekend, the Lumberjacks held a 2-1-1 record against their division rival and having won the most recent matchup by the score of 7-1 back at the January Showcase. After a scoreless opening period, Mason Emoff scored two goals in the first 2:21 of the 2nd frame to give the boys a 2-0 lead. Foley added another goal on the power-play later in the period to give the Lumberjacks a three-goal advantage. Both Foley and Adam Kusior had third period goals as well, leading the squad to a 5-0 win. Kyle Konin was terrific in net yet again, stopping all 24 shots for his first shutout of the season.

The boys returned to the rink the very next day for another matchup against the Wolves and it had a similar pattern to it. After a scoreless 1st period, the Lumberjacks came out flying the 2nd frame, scoring four times from the likes of Colin Philippon, Geordan Buffoline, Discanio, and Landon Michniak. The boys continued to keep up the pressure in the 3rd period as Buffoline completed the hat-trick with a pair of goals in the frame. Foley also added a pair of goals on the power-play as the Lumberjacks won by a final score of 8-0. Connor Carbo stopped all 19 shots that he faced for his 2nd shutout of the season.

On Saturday, the EHLP team welcomed the Wolves to town for a pair of matchups over the weekend. The Wolves won the first game 3-0, and came all the way back from a 4-0 deficit to win on Sunday by a final score of 6-4. Michael Ptasinski, Jackson Clayton (power-play), Frank Mondi, and Zachary Miller (short-handed) had the Lumberjacks four goals over the week. Dillion Whalen was busy in net, stopping 52 shots over the two games.

One busy week leads into another for the Lumberjacks organization as the EHL team will hit the road for a matchup against the 1st-place New Hampshire Avalanche on Wednesday, followed by a pair of games over the weekend in Haverhill against the Valley Jr. Warriors.

On the other end, the EHLP team will head down to Haverhill on Friday to start a three-game series of their own, against the Warriors. 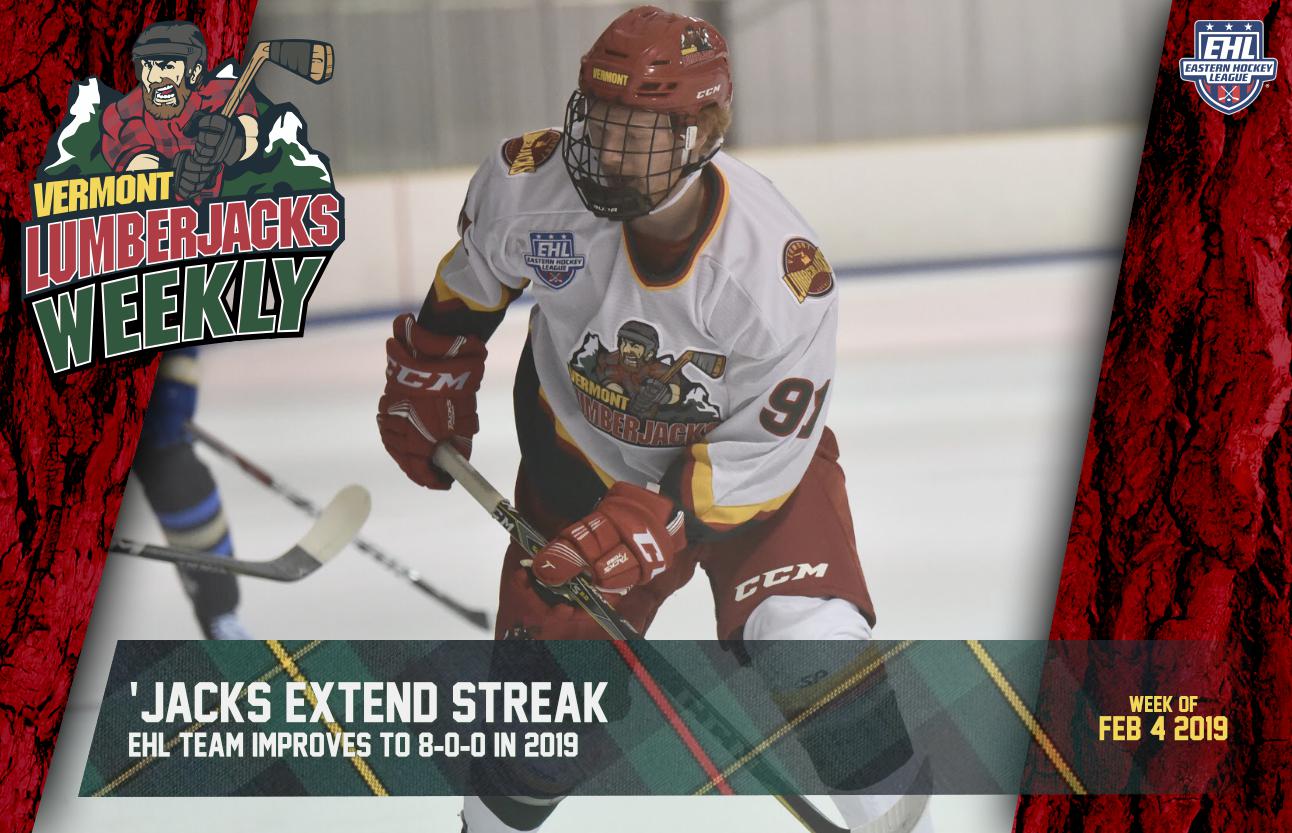