BURLINGTON, VT -- Both Lumberjack teams were back in action this past week as the EHL team went 2-1-0 in their three games. After the pair of victories, the Lumberjacks continue to creep up in both the division and conference standings, as they would be the #4 seed if the playoffs started today.

The Premier team on the other hand, dropped all three of their games, but did come away with a point in an overtime loss, as they still sit in 3rd place in their conference with a record of 17-16-4.

On Wednesday, the EHL team traveled down to Hooksett, NH to face-off against the 1st-place New Hampshire Avalanche for the fourth and final time this season. Going into Wednesday’s game, the Lumberjacks held a 0-2-1 record against their divisional opponent this year, with a pair of those defeats being decided by just a single goal. The Avalanche got the first goal of the game just under four minutes into the contest, but Andrew Bechard answered, with a goal just 42 seconds later to tie the game up at one apiece. However, the Avalanche would get a pair of goals near the end of the frame and took a 3-1 lead into the 1st intermission. After another Avalanche goal, Zachary Booth made it a 4-2 game with a tally near the end of the 2nd frame. Robby Feathers made it a one goal game with a goal near the 13-minute mark of the 3rd period, but unfortunately, it wasn't enough, as the Avalanche added two more goals and won the game by a final of 6-3. Kyle Konin was busy in net, stopping 43 shots in the losing effort.

On Saturday, the Lumberjacks traveled to Haverhill, MA to kick off a two-game series against the Valley Junior Warriors. Going into Saturday's matchup,  the Lumberjacks held a 1-1-0 record against their divisional opponent this season, but the two teams hadn't played against each other since September. Bechard found the back of the net first, and gave the boys the lead just under five minutes into the game. The Warriors answered back with a pair of goals in the 1st period, and took a lead into the 1st intermission. The Warriors would add to their lead in the opening minutes of the 2nd period, but the Lumberjacks stormed back with five goals in the frame, including three goals in 42 seconds, to take a 6-3 advantage into the break. Adam Kusior, Conor Foley, Glynn Robitaille, Logan Discanio, and Landon Michniak had the 2nd period goals. Despite a pair of Warriors' goals in the 3rd period, the Lumberjacks held on thanks to a power-play tally from Bechard, as well as an empty-net goal from MacCallum Brown, and won the game by a final score of 8-5. Connor Carbo stopped 23 shots in his 11th win of the season.

On Sunday, the boys wrapped-up their regular season series against the Warriors and fell behind early, but recent Manhattanville College commit, Mason Emoff evened things up at a goal apiece near the 12-minute mark of the opening period. Both Foley and Colin Philippon found the back of the net in the opening minutes of the 2nd period, giving the Lumberjacks a 3-1 advantage. However, the Warriors rallied back for a pair of goals of their own to knot up the game at 3-3 heading into the 2nd intermission. Philippon wasted no time in the 3rd period, scoring in the first couple minutes of the frame to give the Lumberjacks back the lead. Robitaille added to their lead a few minutes after that, and despite a late Warriors goal, the boys held on for a 5-4 victory. Konin was solid in net yet again, stoping 28 shots in the win.

On Friday, the EHLP squad traveled down to Haverhill, MA to kick-off a three-game series against the Valley Junior Warriors. The Warriors got on the board first with a short-handed goal in the 1st period, but Frank Mondi evened things up on the power-play in the 2nd frame. The game remained deadlocked until the end of regulation, and the Warriors were able to get the extra point by winning in a shootout. Alex Herman stopped 28 shots in the shootout loss.

On Saturday, the two teams returned to the rink for the second game of the series. After a scoreless 1st period, the Warriors came out strong in the 2nd frame, scoring six goals and took a 6-1 lead into the final frame. After another Warriors goal, the Lumberjacks rallied back with four unanswered tallies from Jonny Daggett, Zack Selinger, and Connor Cameron (2) to make it a 7-5 game. However, the Warriors would tack on an empty-net goal late in the contest, and won the game by a final of 8-5.

On Sunday, the boys wrapped-up their weekend and regular season series against the Warriors. After falling behind in the 1st period, Nathan Damren evened things up at one goal apiece in the early minutes of the 3rd. Unfortunately, the Warriors would add a pair of goals, including an empty-netter later in the period, and won the game by a final score of 3-1. Dillion Whalen stopped 26 shots in the losing effort.

One busy week leads into another for the Lumberjacks organization, as both squads will head back on the road, as the EHL team will face-off against the Boston Jr. Rangers for a pair of matchups over the weekend.

The Premier squad on the other hand, will get started a day earlier in Tewksbury, as they will square-off against the Rangers for three total games  over the weekend. 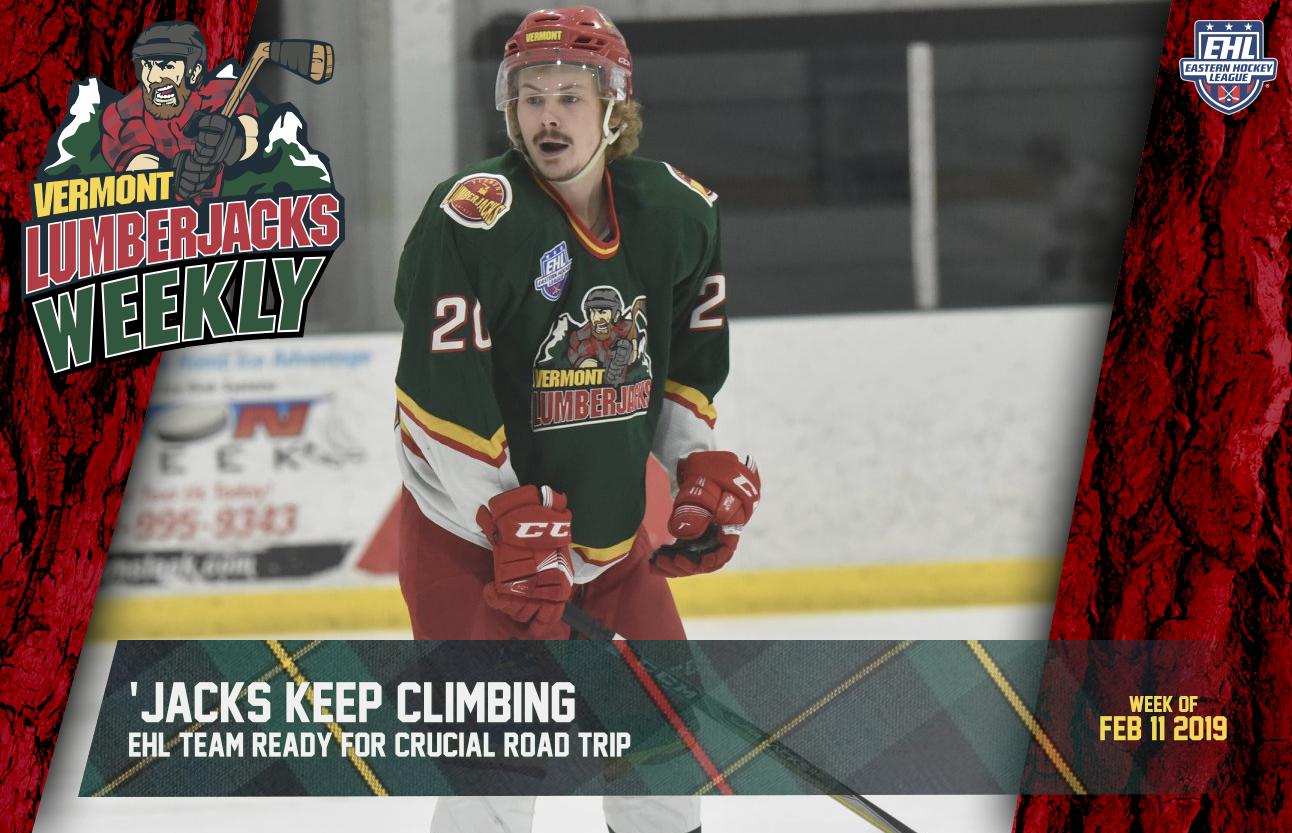