BURLINGTON, VT -- Both Lumberjacks squads were back in action this past weekend, and the EHL team continued to roll, by winning both of their matchups against the Boston Jr. Rangers. With the wins, the Lumberjacks have now won 12 out of their last 13 games and also leaped over the Rangers for second place in their division with a record of 25-13-3. The weekend sweep, also gives the Lumberjacks the control of the #3 seed in their conference.

The EHLP team on the other hand, went 1-2-0 over the weekend and still remains in 3rd place in their conference with a record of 18-18-4.

On Saturday, the EHL team kicked off their two game series against the Boston Jr. Rangers. Going into the weekend, the Lumberjacks trailed the Rangers by 3 points in the standings and held a 1-1-0 record against their division rival this season. The boys wasted no time on Saturday as recently named TSR Hockey Star of the Week, Adam Kusior, put the Lumberjacks on the board just 59 seconds into the game. Geordan Buffoline gave the boys a two-goal advantage with a power-play goal just under five minutes into the 2nd frame. The Rangers were able to cut the lead in half just a few minutes later, but Kusior found the back of the net again in the 3rd period to lead the Lumberjacks to a 3-1 victory. Kyle Konin was terrific in net, stopping 38 shots in the win.

On Sunday, the Lumberjacks fell behind early, but Mason Emoff knotted things up at one goal apiece near the 12-minute mark of the 2nd period. The Rangers would get the next two goals from there to go up 3-1, but Kusior came to the rescue yet again with a pair of goals just 31 seconds apart to tie the game up at 3-3. Conor Foley then gave the boys the lead with a tally near the end of the frame, which marked his 13th goal of the season. Emoff and Glynn Robitaille added 3rd period goals to put the game out of reach, and the Lumberjacks won by a final score of 6-4. Konin picked up the win between the pipes, stopping 26 shots for his 15th win of the season and 8th with the Lumberjacks organization.

On Friday, the EHLP team kicked-off their three-game series against the Rangers. Going into Friday’s matchup, the Lumberjacks held a 0-2-1 record against their divisional opponent so far this season. The Rangers took the early lead, but Frank Mondi found the back of the net near the halfway point of the 1st period to knot up the game at a goal apiece. The Rangers added two more goals near the end of the frame, and took a 3-1 lead into the 1st intermission. However, the Rangers put seven goals on the board in the 2nd period and won the game by a final score of 10-3. Raymond Miller and Jackson Clayton had the other two Lumberjack tallies in the loss.

On Saturday, the boys wasted no time as Logan Aprea gave the Lumberjacks the lead just 17 seconds into the contest. The Rangers would even things up on the power-play just a few minutes later, but Jacob Dillion gave the Lumberjacks back the lead near the 11-minute mark of the frame. However, the Rangers rallied for three goals in the back end of the period to take a 4-2 lead into the 1st intermission. The Rangers added another power play goal in the 2nd period, followed by two more goals in the 3rd, and won the game by a final score of 7-2.

The squad returned to the rink on Sunday to cap off their season series with the Rangers. Connor Cameron put the Lumberjacks ahead first, with a goal just under seven minutes into the game. The Rangers responded with a goal of their own near the five-minute mark of the period, but Zachary Miller put the Lumberjacks back ahead on the power-play just 60 seconds later. The back and forth action ensued as the Rangers evened things up at two goals apiece near the end of the period. Both Aaron Damren and Kanyn Rogers found the back of the net in the 2nd period to give the boys a 3-1 lead. The Rangers would rally back for a pair of goals before regulation ended to make it a 3-3 game, forcing overtime to determine a winner. However, the overtime didn't last very long as Cameron notched the game-winning goal just 25 seconds into extra frame, to give the Lumberjacks to 4-3 win. Dillon Whalen was solid in net, stopping 45 shots between the pipes.

Both Lumberjacks squads will get back to work this upcoming week as the EHL team will welcome the North Carolina Golden Bears to town for a pair of games with the first game starting today at 12:00pm. Following the two games with North Carolina, the EHL team will wrap-up their regular season with matchups against the Connecticut Chiefs and the Connecticut RoughRiders this weekend.

On the other end, the EHLP squad will travel to Newington, CT on Friday to face-off against the Connecticut Chiefs in a three-game series. 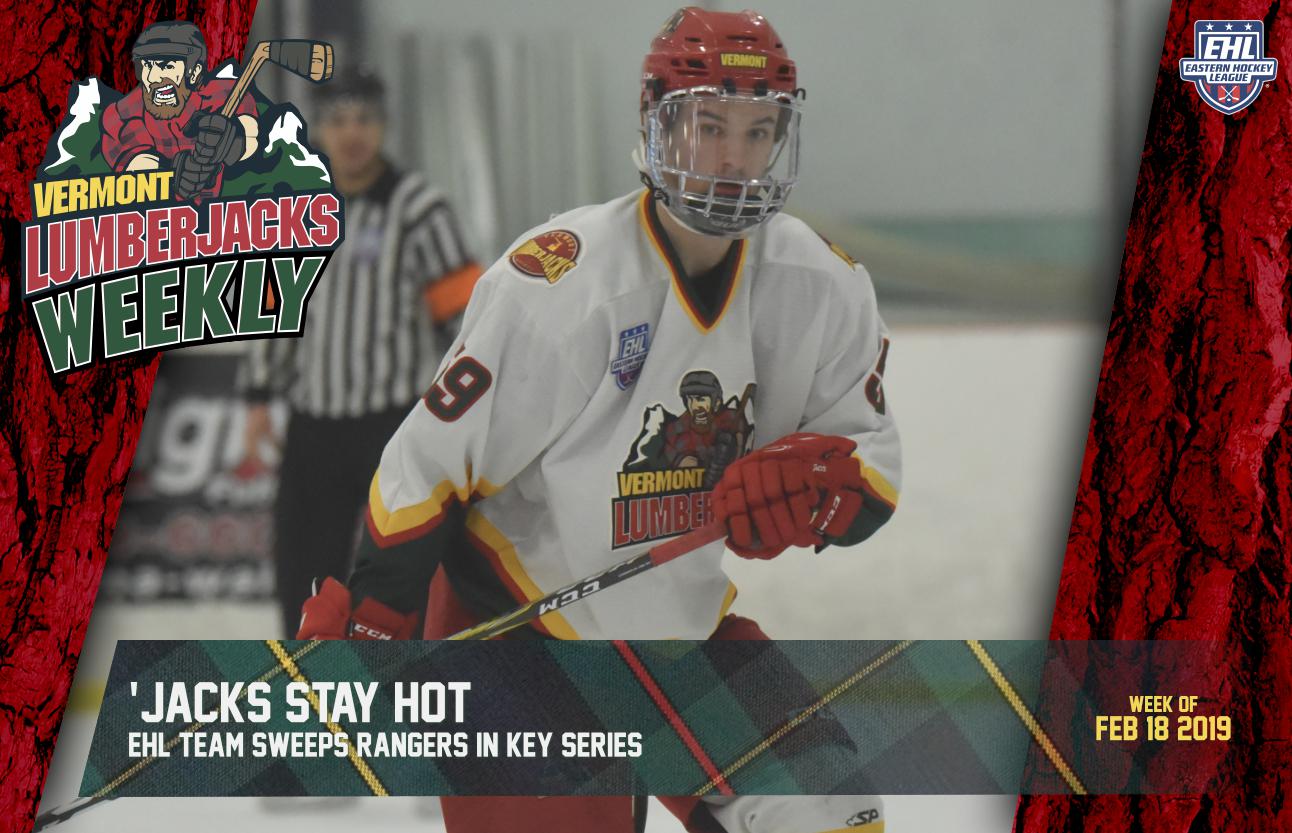