BURLINGTON, VT -- Both Lumberjacks squads were back in action this past week as the EHL team finished off their regular season on a high note, going 3-1-0 in their final four games, to end the year with a record of 28-14-3. They will now enter the postseason as the #3 seed in the New England Conference.

The EHLP on the other hand, dropped all three of their games this past weekend, but gained a point from a shootout loss, and they now sit in 4th place in their conference with a record of 18-20-5. They officially will host the Walpole Express in the First Round of the EHLP Playoffs.

On Tuesday, the EHL team welcomed the North Carolina Golden Bears to town for the last two home regular season games of the season. Logan Discanio put the boys on the board first with a goal just past the 11-minute mark of the period. Glynn Robitaille made it a 2-0 game a few minutes later with a goal on the power-play. The Golden Bears cut the deficit in half with a goal of their own in the early minutes of the 2nd period, but Robitaille answered just 39 seconds later to give the Lumberjacks back the two-goal advantage. Just 13 seconds later, Colin Philippon found the back of the net and the flood gates opened up from there as Conor Foley, Geordan Buffoline, and Zachary Booth followed with 2nd period goals, as the Lumberjacks took a commanding 7-1 lead into the 2nd intermission. Robitaille finished off his hat-trick in the 3rd, leading the squad to an 11-1 win. Philippon, Dan Barry, and Adam Kusior had the other 3rd period goals, and Connor Carbo stopped 19 shots in the win.

The squad returned to the rink on Wednesday for another matchup against the Golden Bears and wasted no time as Cory Doney put the Lumberjacks ahead just over three minutes into the contest. Buffoline made it a 2-0 game just a few minutes later, but the Golden Bears would rally back for three straight goals to take a 3-2 lead. Phililppon evened things up in the second period and MacCallum Brown gave the boys back the lead in the closing minutes of the frame. The Lumberjacks controlled play for most of the third period with six goals in the frame, and won by a final score of 10-3. Doney, Andrew Bechard, Brown, Robitaille, Barry, and Philippon had the 3rd period goals. Carbo stopped 19 more shots in route to his 13th win of the season.

On Saturday, the Lumberjacks headed down to Connecticut for their final road trip of the season. The weekend’s first test came against the Connecticut Chiefs, a team who the Lumberjacks beat by a score of 4-3 back in January. Bechard put the boys on the board first, but the lead didn't last long, as the Chiefs answered back with three straight goals to take a 3-1 lead. Tyler Lisieski cut the defect in half in the 2nd frame, with a goal near the 13-minute mark of the period. However, the Chiefs would score three more unanswered goals in the first five minutes of the 3rd, and took a commanding 6-2 lead. Landon Michniak gave the Lumberjacks life with a short-handed goal near the 12 minute mark of the frame, but despite late goals from Philippon and Robitaille, the Lumberjacks fell by a final score of 7-5.

The EHL squad looked to end their season on a high note, with an important divisional matchup against the Connecticut Roughriders this past Sunday. The Lumberjacks won the first and only other meeting between the two teams back in January, and entered Sunday’s game with playoff seeding implications on the line. After falling behind early, Foley found the back of the net near the six-minute mark of the 1st period, to knot up the game at one goal apiece. Robitaille, Booth, and Feathers added early 2nd period goals to give the boys a 4-1 advantage. Barry added to the lead just 18 seconds into the 3rd period to give the Lumberjacks a commanding 5-1 lead. The Roughriders rallied back for a pair of goals, but it wasn't enough as Jackson Aldrich ice things with an empty-net tally in the final minute, and the Lumberjacks won by a final score of 6-3. Kyle Konin was solid in net, stopping 28 shots for his 16th win of the season.

On Friday, the Premier squad headed down to Connecticut for their final road trip of the season, with a three-game weekend series scheduled against the Chiefs. The Lumberjacks won the previous three games against their divisional opponent, all of which took place back at home in December. After a scoreless 1st period, the Chiefs found the back of the net first, with a goal in the opening minute of the 2nd frame. Roger Kergaravat answered back on the power-play just a few minutes later to even things back up a one goal apiece. However, the Chiefs scored a power-play goal of their own near the end of the period and were able to hold on the rest of the game for a 2-1 win. Connor Schultz stopped 19 shots in the loss.

On Saturday, the two teams faced off in game #2 of the three-game series. After a scoreless 1st period, the Chiefs went ahead on the power-play halfway through the 2nd frame. Connor Cameron tied the game at one, with a goal just under three minutes after. The game remained scoreless through the rest of regulation as well as the overtime period, and the Chiefs took the extra point by winning the shootout. Alex Herman was solid in net, stopping 32 shots in the shootout loss.

On Sunday, the Premier squad capped off their road trip by finishing off their regular season series against the Chiefs. Jackson Clayton put the Lumberjacks on the board first with a goal in the closing minutes of the 1st period. However, the Chiefs would answer back with a pair of goals in the second frame to take a 2-1 lead. Despite being on the man advantage in the final minute, the Lumberjacks couldn't find the back of the net and lost by a final score of 3-1. Dillion Whalen was busy in net, stopping 31 shots in the loss.

The EHL team has clinched the #3 seed in their conference, and is still waiting to find out who their First Round opponent will be.

As for the EHLP team, they know they set to match up against the Walpole Express in the First Round of their playoffs.

Be sure to check back in next week, for our Lumberjacks Playoff Preview. 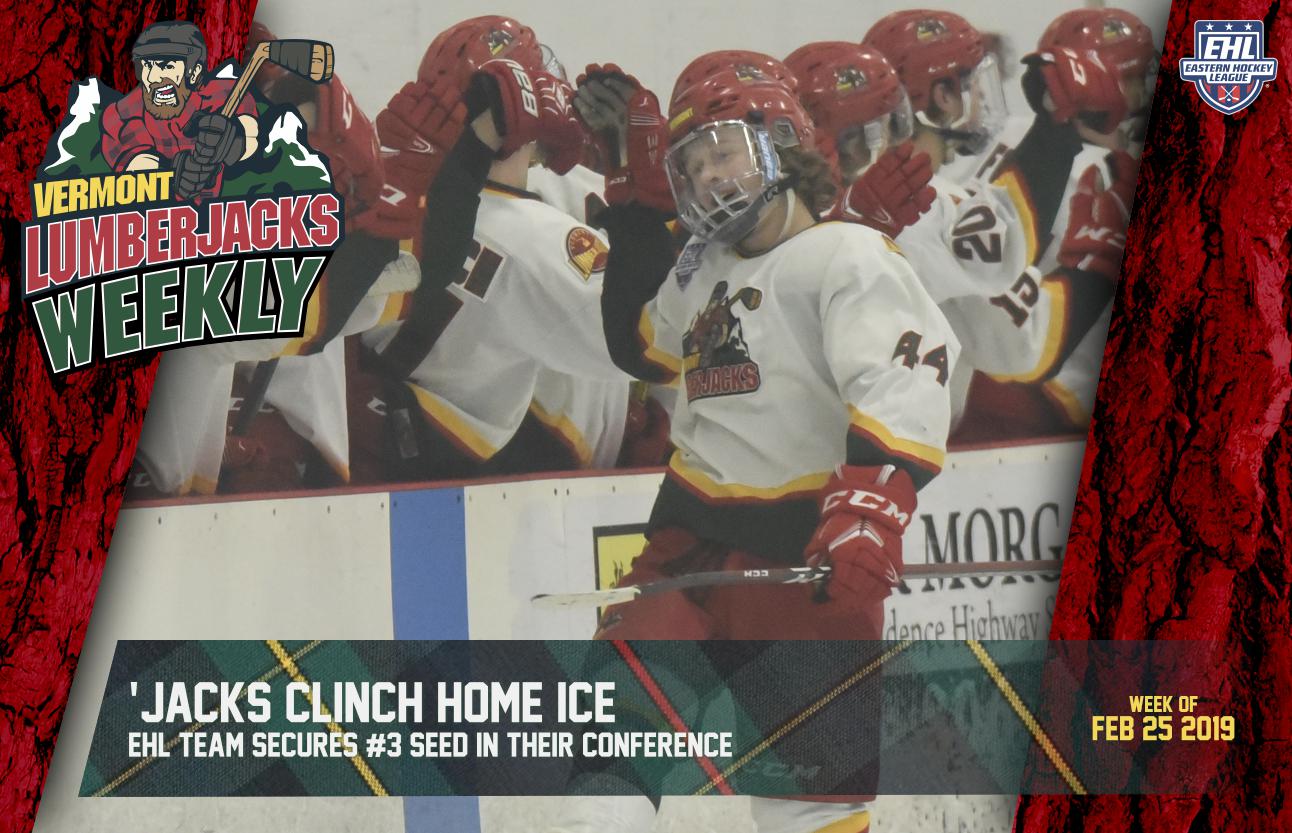