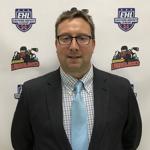 Coach Smith is a level 4 certified USA hockey instructor and his coaching philosophy includes strong team play, and a thorough understanding of hockey principles.  He is a teacher of the game on and off the ice.  Coach Smith has been an active coach for the Green Mountain Glades Youth Hockey Program, Essex Youth Hockey and Vermont Hockey Training Center.  Coach Smith’s goal is to provide a place for local players to train and develop and prepare for high school and provide the right mix of individual skill development and team concepts that will help them advance in their hockey careers while playing for the Vermont Lumberjacks on and off the ice. 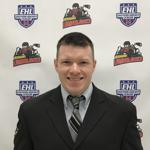 A native of Colchester VT, Edwin Montgomery joins the lumberjacks coaching staff after playing experience at many levels. Montgomery played prep school hockey at National Sports Academy (NSA) in lake placid prior to competing in the college ranks as well as a short stint playing overseas. Montgomery finished collegiate career at SUNY Stony Brook University, helping the school win its first league title.  Edwin is currently a Correctional Officer for the state of Vermont.

Montgomery has had coaching experience from youth hockey, to helping coach Colchester High School, as well as helping train and run goalie and player camps for Pro Ambitions, where he worked with Mike Buckley training and working with goalies of all levels including NCAA Division I, II, III, ECHL, AHL. Montgomery hope to help prepare the athletes for their next step in their careers through his own experiences and knowledge.